This Is the Iceman’s Voice

The 5,300-year-old mummy's speech is recreated by scientists.

The "best possible approximation" of Ötzi the Iceman's voice has been reconstructed by scientists who aimed to discover the timbre and color of his Stone Age vowels.

Ötzi broke his silence with a deep male voice after 5,300 years at the EURAC Institute for Mummies and the Iceman in Bolzano.

He spoke Italian -- but just vowels, as you can hear below. 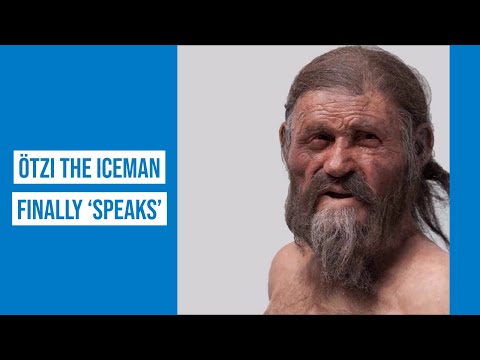 The experiment was presented on Wednesday morning during a major congress to celebrate the 25th anniversary of the mummy's discovery in the Ötztal Alps in South Tyrol.

RELATED: Iceman Died After Sneak Attack From Behind

"We can't say we have reconstructed Ötzi's original voice because we miss some crucial information from the mummy," Rolando Füstös, chief of the ENT department at Bolzano's General Hospital, told Discovery News.

"But with two measurements, the length of both the vocal tract and the vocal cords, we have been able to recreate a fairly reliable approximation of the mummy's voice. This is a starting point for further research," he added.

Füstös and colleagues Francesco Avanzini, ENT specialist and phoniatrician at the city's General Hospital, Piero Cosi, at the Institute of Cognitive Sciences e Technology, National Research Council in Padova, Andrea Sandi, at SINTAC Biomedical Engineering in Padova,and others based their research on the CT scans of the mummy to create a model of his vocal tract.

"The vocal chords are the source of the vocal sound, but the main contribution to it is given by the selective filtering accomplished by the vocal tract configuration," Füstös said.

The researchers had to face several challenges as they worked to reconstruct the structure of the 5,300-year-old mummy's vocal tract.

"We had to deal with Ötzi's position, whose arm is covering his throat," Avanzini told Discovery News. "For our project this is the worst position you can imagine. Moreover, the hyoid bone, or tongue-bone, was party absorbed and dislocated."

With special software, the researchers moved Ötzi's arm, repositioned his skull in the erect position, reconstructed his vertebrae, from the first one (C1) closest to the skull, to the first thoracic vertebra (T1), and reconstructed and repositioned the hyoid bone, which supports the tongue.

They ended up with a complete model of the vocal tract, including the vocal cords and mouth, though they missed important data such as the tension and density of the vocal cords or the thickness and composition of the soft tissues that affect the human voice.

MRI scans would have helped the researchers getting more insights, but the technology could not be used because of the condition of Ötzi's mummified body.

"We had to rely on mathematical models and a software that simulates the way the vocal tract works," Cosi said.

He explained that calculations of vocal area functions applied on the structure of the vocal tract produce a certain vocal sound.

"We ... tried to extract the formants of a synthesized sound 'injected' in the reconstructed vocal tract," Cosi said.

Taking into consideration that Ötzi had a rather large head and slender body, the researchers concluded that his voice likely had a fundamental frequency between 100 Hz and 150 Hz, in line with today's average male.

"This is a new, interesting aspect on Ötzi's research that deserves to be taken into consideration for further research," Albert Zink, director at the EURAC Institute for Mummies and the Iceman in Bolzano, told Discovery News.

Frank Rühli, director of the Institute of Evolutionary Medicine at the University of Zurich and president of the scientific advisory board of the Iceman, agreed.

"It is a novel high-tech approach to bring 'life' to ancient mummies. It helps to understand the impact of post-mortem processes on the preservation of anatomical sturcture," he told Discovery News.

style="text-align: left;">On Sept. 19, 1991, German hikers Erika and Helmut Simon spotted something brown while walking near a melting glacier in the Oetztal Alps in South Tyrol. As they got closer, they realized with horror it wasn't a piece of rubbish, but a human corpse lying on its chest against a flat rock.

style="text-align: left;">Only the back of the head, the bare shoulders and part of the back emerged from the ice and meltwater.

style="text-align: left;">In the following days, various attempts at recovering the corpse were made. Finally, on Sept. 23, the body was extracted from the ice along with numerous pieces of leather and hide, string, straps and clumps of hay. The mummified body was taken to the Institute of Forensic Medicine in Innsbruck.

style="text-align: left;">The mummy lay in a 131-foot-long, 9-foot -deep and 22- foot -wide rocky gully surrounded by steep stone walls at an altitude of 10.531 feet. Since the glacier made it difficult to establish the exact location of the watershed, a controversy arose on which soil -- Italian or Austrian -- it was found. A survey of the border carried out on Oct. 2, 1991 established that the mummy lay 303.67 feet from the border in South Tyrol, in Italy.

style="text-align: left;">The discovery caused a global media sensation. Initially, the mummy was dated to be at least 4,000 years old (later, radio carbon dating established that the man lived around 5,000 years ago, between 3350 and 3100 B.C.). Such an old, well preserved, fully clothed, mummified body had never before been seen.

style="text-align: left;">Between July 20 and Aug. 25, 1992, a second archaeological survey was carried out at the glacier. Numerous pieces of the Iceman's equipment emerged, such as a bearskin cap, leather and hide remnants, grasses, string, pieces of skin, muscle fibers, hair and a fingernail.

style="text-align: left;">Although the most important piece in the Iceman's equipment is a copper-bladed axe (tests have shown it could have chopped down a yew tree in 35 minutes) this stone disc is the most mysterious. Made of white Dolomite marble, it has a hole in the middle through which a hide strip was threaded. Nine twisted hide thongs were tied on to a loop in this strip. After 20 years, the disc's function remains unclear.

style="text-align: left;">Oetzi is the world's most studied mummy. The Neolithic man is a so-called "wet mummy." As humidity is retained in individual cells, the body tissue is elastic and allows in-depth scientific investigations. With all his recovered clothing and equipment, this natural mummy, unaltered by burial rites, provides a unique view into Stone Age life in Europe.

style="text-align: left;">Researchers were able to diagnose several anatomic anomalies and pathologies in the mummy: Oetzi lacked a 12th pair of ribs, had bad teeth, worn joints and hardened arteries, and suffered from whipworm infestation. He also had a remarkable diastema -- a natural gap between his two upper incisors.

style="text-align: left;">Oetzi's body is covered with over 50 tattoos produced by fine incisions into which charcoal was rubbed. The cuts were probably part of a pain-relieving treatment. Indeed, the tattooed areas correspond to skin acupuncture lines. Before Oetzi, it was believed that acupuncture originated 2,000 years later in Asia.

style="text-align: left;">In 2001 new X-ray analysis revealed the presence of a flint arrowhead in the left shoulder. The arrowhead ended up just a few inches from the lung. Although vital organs were not hit, the arrow severed a major blood vessel and damaged the neurovascular fascicles of the left arm. This caused heavy bleeding and possibly paralysis of the arm. The Iceman probably bled to death within a matter of minutes. A deep wound to the hand and numerous bruises confirm that the Iceman engaged in hand-to-hand combat shortly before his death. Recently, researchers also discovered a skull fracture and major bleeding in the back, suggesting that the mummy also suffered a blow to the head. He died in the spring or early summer at about age 45.

style="text-align: left;">This reconstruction by two Dutch experts, Alfons and Adrie Kennis, was produced with the latest in forensic mapping technology. It used three-dimensional images of the mummy's skull as well as infrared and tomographic images. It shows Oetzi as a brown-eyed, bearded, furrow faced man who spent many hours walking in the mountains. He was about 5 foot, 3 inches tall and weighed 110 pounds. The Iceman belonged to a European genetic group and was probably infertile.

style="text-align: left;">On Jan. 16, 1998, the Iceman and his belongings were moved from the Institute for Anatomy of Innsbruck University to a newly-built South Tyrol Museum of Archaeology in Bolzano. The mummy now lies in a darkened room and can be viewed through a small window. At a temperature of -42F° and a relative humidity of 98 percent, Oetzi's house simulates the conditions of the glacier ice. To stop the mummy from gradually drying out, the cell walls are lined with tiles of ice.

style="text-align: left;">Claims of a Tutankhamen-style curse have begun to spread about Oetzi. Indeed, seven strange deaths occurred just a couple of years after German hiker Helmut Simon and his wife Erika discovered the frozen mummy in the Oetztal Alps in 1991. The seven people who died were all involved either in the recovery of the mummy or in the scientific investigation. One of the seven was Helmut Simon, whose body was found trapped in ice in 2004, just like his famous find.