Octopuses are social animals that change colors to resolve disputes and even throw debris at each other, video footage of a group of the feisty sea creatures in Jervis Bay has shown.

The octopuses' unusual behaviour was first observed by a local diver - study co-author Matthew Lawrence - who mentioned their social gathering on a cephalopod enthusiast website.

It immediately attracted the attention of an international team of octopus experts, including Professor Peter Godfrey-Smith from the University of Sydney and City University of New York and Professor David Scheel from Alaska Pacific University.

They set up underwater cameras to film the octopuses interacting.

The study, published today in Current Biology, documents a very rare example of octopuses living in a group.

Octopuses have generally been viewed as solitary creatures, and their color-changing abilities primarily as a means to hide from hungry predators.

But after binge-watching hours of footage, the researchers discovered not only did the octopuses live together, they also used their color-changing abilities, along with extreme body postures, to avoid conflict in social interactions with other octopuses.

Up to a dozen Sydney octopuses (Octopus tetricus) inhabit a three-metre-square area in the middle of Jervis Bay, with the site centring on an encrusted object in the midst of a sandy expanse. 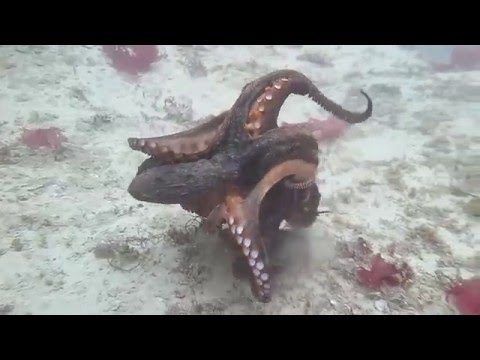 "Octopus began living there and dropped the shells of the scallops they had eaten. Over time the shell midden built up, providing good building materials for new arrivals to create dens," Professor Godfrey-Smith said.

But the octopuses were not hanging about because they liked each other or wanted to be in close proximity, he said.

"There are scallops everywhere, providing an almost unlimited food source, while the mound of scallop shells provides an island of safety amidst a sea of predators including sharks, dolphins, seals and pack-hunting leatherjackets," Professor Godfrey-Smith said.

"Perhaps they are just tolerating each other; perhaps there's more engagement. [We know] they mate at the site as well."

During the 52 hours of footage collected, the octopuses interacted with each other 186 times, and engaged in a range of actions, from standing tall, to raising their mantle over their head, throwing debris at or poking each other, spreading their webs, or darkening their skin tone.

"When one octopus sees another dark-skinned octopus approaching, it may 'go dark', indicating that the encounter is likely to escalate," Professor Godfrey-Smith said.

Like other cephalopods, octopuses are able to change color and pattern by dilating or contracting chromatophores in their skin.

"They then stand tall with their web spread in what we call the Nosferatu pose, after the classic film vampire, with the encounter likely leading grappling or other acts of aggression," Professor Godfrey-Smith said.

Octopuses Have Moves, But No Rhythm

"We don't know exactly why they engage in these heated exchanges. It could be an attempt by one or more animals to control territory, as we saw males excluding males but not females, but this isn't always the case," Professor Godfrey-Smith said.

Professor Godfrey-Smith and Professor Scheel enlisted the help of a group of students to analyse the video.

Bizarre Fighting Octopuses Cause A Stir In Australia

"They binge-watched 52 hours of GoPro footage of octopuses walking around and poking each other, scoring the octopuses' moods by measuring their pixels of their skin color against those in the background," Professor Godfrey-Smith said.

"It's harder than it sounds. Trying to keep track of who's who is very difficult. They can change color or shape in a second, and when one moves into view it is hard to tell whether they are a new animal -- or one that you've been watching for ages.

"We would love to know to what extent this behaviour was about males trying to control territory or whether it was part of a richer and more complicated social life that we are only just becoming aware of."

An octopus displays dark color and spread web and arms.

Close-up observations of male and female octopus pairs offer a rare look at relationships among these tentacled animals, confirming anecdotal accounts once thought too bizarre to be true. The paper, published in the latest issue of the journal PLOS ONE, describes behaviors previously unknown for any octopus. The study specifically focused on a visually distinctive species known as the larger Pacific striped octopus. "Only a handful of these beasts have ever been collected, and to our knowledge, (Panamanian biologist and co-author Aradio) Rodaniche is the only scientist to have seen them in the wild," lead author Roy Caldwell told Discovery News. "They live in deep, open habitats with generally poor visibility -- not a place that many people go to study octopus," added Caldwell, who is a University of California at Berkeley professor of integrative biology and is one of the world's leading experts on cephalopods. He and Rodaniche conducted the study with colleagues Richard Ross and Christine Huffard.

From 2012 to 2014, Caldwell and his team were able to observe 24 captive adult larger Pacific striped octopuses. In the wild, this species has been observed in a handful of locations off the coast of Nicaragua in murky intertidal waters close to the mouths of rivers. According to the

, at one point Caldwell had a 100-gallon tank in his home that allowed him to breed and rear the species, which did not seem to mind the rather luxurious new digs. Here, a male displays his many stripes and spots. These patterns vary in shape between individuals, the researchers discovered.

Octopuses have no built-in shell, unlike other mollusks, such as snails and mussels. To protect themselves, they often squeeze into small spaces. Here, a female larger Pacific striped octopus hangs out of her shell. In this moment, captured by the camera, she was observing a male, who was approaching her from the right. During the study, the octopuses could establish their own shells/dens. One pair became so close, however, that they chose to share a den for more than three consecutive days at a time. They did this more than once, too.

Males initiate mating, and become darker in color during the act. Here, the male on the left begins to insert his mating arm into the female's genital opening. His goal is to transfer packets of sperm, known as spermatophores, into the female. Earlier research led by Janet Voight of the University of Chicago found that octopuses could get erections. They have erectile tissue with a structure that is remarkably similar to that of mammal penises and clitorises.

The paper provides the first photo and video-substantiated evidence that octopuses may mate beak-to-beak. The beak is the only hard part of the octopus. It is located on the lower side of the body. Its structure is similar in hardness to human fingernails. The paper also offers the first evidence that a mating octopus pair may co-occupy a den. Previously, it was not known that octopus pairs tolerated, or might even enjoy, such closeness. Caldwell explained that this happens "probably because they live in areas with few suitable dens, poor visibility and scattered prey, making finding mates difficult."

The long and thin white object in this photo is a packet of the male's sperm being passed down the male's hectocotylus. Males have two of these "arms," which are specialized to store and transfer spermatophores to the female. Because males possess two such arms, females could theoretically mate with two males at a time. In this case, it was just a one-on-moment, where the sperm was about to be deposited into the female's mantle cavity. Mating between larger Pacific striped octopuses is not necessarily slow and romantic, but instead can be full of drama. Intimate moments, where males and females would sit facing each other with their suckers aligned, could be followed by intense jostling. The researchers observed that a female would sometimes "hug" a male so hard with her many arms that "sucker marks from the grip of the female" were often visible later on the male.

Octopus Can See With Its Skin

When females have had enough, they let the males know. The researchers observed that the two would grapple before parting ways, with the female sometimes jetting water at the male to help push him aside. "The most overt example of female aggression during mating took place when a male attempted to mate with a brooding female," the scientists wrote. "However, other brooding females mated without overt resistance."

One octopus pair was so close that they mated daily. "This pair was also observed to share food," the authors wrote. The octopus' technique for capturing prey turned out also to be unique among other reports on cephalopods. "What I find most interesting about larger Pacific striped octopuses is their diversity of predation tactics, including what appears to be slow, deliberate stalking of shrimp," Caldwell said. "The extension of one of the first pair of arms out and over the shrimp, then touching it on the fair side to cause it to tail-flip back into the waiting other arms of the octopus is unique," he added. "It is most surprising to see an octopus spot a shrimp several inches away, compress its body against the substrate, darken and slowly creep forward until it can reach an arm over the top of the shrimp and cause it to escape back into the octopus's waiting arms."

While octopuses may be soft and squishy in texture, they are also quite muscular. They are so strong that they can break the hinge of a clam, Caldwell said. "Like other octopuses, they also pounce on crabs, drill (holes into) snails and hermit crabs, crush bivalves, and probe cracks and crevices," Caldwell said.

The result of all of the mating, den and food sharing is a bunch of octopus eggs, which are shown here being protected by their mother. Many mysteries still remain about these and other octopuses, such as how long the cephalopods may stay together, and how old they can live to be in the wild. Octopus dad skills are also a big question mark for now, but it is suspected that they are not averse to housekeeping. Caldwell explained, "We don't know what role, if any, males take in parental care. I would be most surprised if males contributed anything more than defense of the den, ventilation and possibly the removal of debris."