Obama Talks About Astronaut's Year in Space on DNews

The president introduced his week-long stint as guest presenter on the Science Channel’s DNews Minute by talking about how critical Mark Kelly’s long stay in space is for the future of space travel.

President Barack Obama tweeted out a welcome to Scott Kelly shortly after the US astronaut returned from spending almost a year in space.

"Welcome back to Earth, @StationCDRKelly!" the President tweeted. "Your year in space is vital to the future of American space travel. Hope gravity isn't a drag!"

On Monday night, the president introduced his week-long stint as guest presenter on Science Presents DNews at 9pm ET/PT by talking about just how critical Kelly's long stay in space is for the future of space travel.

NASA and its space station partners flew Kelly and Mikhail Korneinko 340 days in orbit as a pilot program intended to pave the way for missions to Mars lasting more than two years.

Both men supplied countless blood and urine samples and other medical stats before, during and after their flight so that medical researchers can pinpoint just how living in microgravity alters the body.

Kelly offers even more data since he has an identical twin brother – Mark Kelly - who didn't subject himself to the rigors of a long-term space stay. Doctors will be sequencing the genes of both Kelly brothers, and then looking for different markers.

"Onboard the space station, it just looks like blood sampling but what you do when you get those samples home is brand new. We've never had data like that before," said station chief scientist Julie Robinson.

One thing they'll be looking for is whether Scott Kelly's genes were altered.

"Everybody is pretty much born with a set of genes that they don't have on the day they die. Your genes mutate for a number of different reasons, also because of the environment," Scott Kelly's twin, Mark Kelly, told Discovery News last January.

Scott Kelly Reflects On His Incredible Year In Space

Understanding how Kelly's long stay in microgravity affected his body is crucial for preparing future crews travel to deep space, including to Mars. A round-trip mission to the Red Planet is expected to take at least two to three years, according to NASA. Before embarking on such long journeys, NASA needs to know what kinds of biological changes the astronauts can expect.

Upon Kelly's return on March 2, a few changes were apparent right away.

Kelly said his muscles were sore, his joints ached, he was fatigued and his skin was super-sensitive. He was also temporarily 2 inches taller than his brother since the lack of gravity pushing on his body allowed Scott Kelly's body to stretch more than it would on Earth. He lost those extra 2 inches after less than two days.

"I'm kind of surprised how I do feel different physically than the last time, with regards to muscle soreness and joint pain," Scott Kelly, 52, said during his first press conference since returning to Earth.

Astronauts returning from a two- to three-year space journey could face these health factors at even higher extremes.

In the meantime, NASA has plenty of data to crunch through to learn exactly how the body reacts to life in space – and think on ways to counteract it. Kelly may be back on Earth, but many of his samples are actually still in space – they're to be ferried back to Earth on board the robotic SpaceX Dragon capsule when it returns in May from its errand run to the International Space Station.

Watch President Obama talked about Kelly's contributions on the Science Channel at 9pm ET/PT tonight. The president will discuss other topics Tuesday through Friday on Science Channel (also available online).

Watch President Obama host DNews in his first episode below: 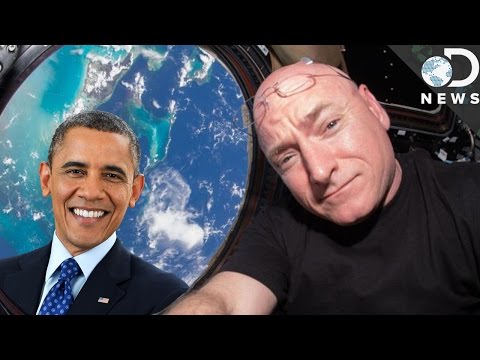 Expedition 46 Commander Scott Kelly of NASA rests in a chair outside of the Soyuz TMA-18M spacecraft just minutes after he and Russian cosmonauts Mikhail Kornienko and Sergey Volkov of Roscosmos landed in a remote area near the town of Zhezkazgan, Kazakhst

Scott Kelly is a NASA astronaut working for a year in space on the International Space Station. Does he have the stuff of "The Martian,"

the highly anticipated Matt Damon movie to be released on Oct. 2

, chronicling the life of a stranded astronaut on the surface of Mars? While Kelly certainly isn't on his own in space, much of the work he is doing would be useful for a trip to Mars. Here are some of the things the astronaut is working on that Mark Watney (Damon's character in "The Martian") would appreciate.

The sun goes through an 11-year cycle of activity, and we are just past the peak of one of those cycles. The solar peak is a time when the sun unleashes more flares and coronal mass ejections (charged particles). When these particles hit the Earth's magnetic field, they can produce spectacular auroras.

But they also can give astronauts a higher dose of radiation.

The space station monitors radiation levels for astronauts close to Earth; in fact, one of the reasons Kelly was selected for this mission was he did not exceed the lifetime radiation levels allowed for astronauts. Radiation is expected to jump for those travelling outside of Earth's magnetic influence. Mars doesn't have much magnetic field to speak of, and the Curiosity mission is monitoring radiation levels on the surface to get more information for future human missions.

Working in space is a harsh business. You're busy all the time, you're stuck in a small environment with several people, and your family and friends are far away. NASA keeps close tabs on its astronauts' psychological health through measures such as doctor calls with astronauts, and

having the astronauts keep journals

during their missions. This will especially be important for Mars, as astronauts will need to be even more self-sufficient due to the time delay in communications between planets. NASA has

for astronauts doing simple tasks; these tasks and their effects on astronauts will be studied as the station work continues.

Microgravity is hard on your body. NASA has its astronauts exercise for a couple of hours a day, which seems to help counteract bone loss for missions of six months. But what about a year, or longer? That's part of what Kelly's mission is supposed to answer. Bones aren't the only things to worry about, either. Muscles shrink, eye pressure increases, your sense of balance changes. Even your immune system may be affected, something that

NASA is also looking at

in detail. So while we think of astronauts as boldly doing spacewalks and experiments on station, understand that they are also part of the experiment. Their very health is being watched for the benefit of future space missions.

While Watney develops a certain affection for potatoes, Kelly recently posted a picture of himself looking pretty pleased next to a floating pile of fruit. It turns out that little comforts do go a long way for astronaut morale, and any nutritionist would tell you that a varied diet of healthy foods is good for you -- not just the freeze-dried stuff the Apollo astronauts survived on during their missions. NASA has an experiment in place to see how well

astronauts are meeting nutritional requirements for their work on station

, and also for their long-term health.

Astronauts are very tied to shipments from Earth right now in terms of eating ... but that is changing in a small way.

Thanks to an experiment called Veggie

, astronauts got to taste some food grown aboard the space station this summer. Lettuce, of course, does not an entire meal make. But as the movie Contact (1997) reminds us, it's through "small moves" that we learn about science. The hope is eventually this experiment will translate into a better way of harvesting crops beyond Earth. For Mars, we're even wondering how viable the soil could be to support plants.

"#ILookLikeAnEngineer on @space_station. Also a scientist, medical officer, farmer & at times a plumber," Kelly wrote with this image in August. What's more, he has to do all those things in a small space. Since every pound hoisted to space costs money, astronauts are accustomed to working in claustrophobic quarters. But NASA, concerned about its astronauts' efficiency and happiness, also has an

. That way, the habitats designed for Mars will be suitable for long-term living.

During a recent Twitter chat, Kelly was asked if he wanted to go to Mars. He said yes, as long as he could return. Getting to Mars and back will take hundreds of days of transportation, let alone the time on the surface. The gravity on Mars is less than 40% what we experience here on Earth. And unless spacecraft design changes substantially, the astronauts will be in microgravity on the way there and back. NASA has an experiment to see

, an experiment that Kelly is participating in. This will be important not only for returning to Earth, but seeing how well a crew can get adapted to Mars after being in microgravity for the transit.