A device the size of a paperclip records brain activity needed for movement and then translates it into commands to control prosthetic limbs.

Tonight President Obama will continue his weeklong stint as the guest presenter on the Science Channel. On Science Presents DNews (9pmET/PT), the POTUS will talk about new research from Australian scientists who have created a "bionic spinal cord" that could give paralyzed people the hope of walking again through the power of thought.

The system relies on a device the size of a paperclip implanted in a blood vessel next to the brain. For those without a TV, you can watch Obama talk about this technology and other important research on DNews' YouTube channel as well as the Science Channel's website. Follow #ObamaOnDNews on Twitter to let us know what you think!

The stent-based electrode would record the brain activity needed for movement and this would be translated into commands to control wheelchairs, exoskeletons, prosthetic limbs or computers.

"We have been able to create the world's only minimally invasive device that is implanted into a blood vessel in the brain via a simple day procedure, avoiding the need for high risk open brain surgery," researcher Thomas Oxley said.

Oxley, a neurologist at The Royal Melbourne Hospital and research fellow at The Florey Institute of Neurosciences and the University of Melbourne, described the device, or stentrode, as revolutionary.

10 Exoskeletons To Make You Superhuman

"Our vision, through this device, is to return function and mobility to patients with complete paralysis by recording brain activity and converting the acquired signals into electrical commands, which in turn would lead to movement of the limbs through a mobility assist device like an exoskeleton," he said in a statement.

"In essence this a bionic spinal cord."

The research, which will see the first in-human trial at The Royal Melbourne Hospital in 2017, was published Tuesday in Nature Biotechnology. It shows the device could record high-quality signals emitted from the brain's motor cortex, without the need for open brain surgery, based on research using sheep.

Brain-machine interface is one of the main areas of research in paralysis treatment.

In 2014, scientists in the United States said they had demonstrated how a monkey could use only its thoughts, transferred by electrodes via a computer, to manipulate the arm of a fully-sedated fellow primate.

Two years earlier, a collaboration between researchers in the United States and the German Aerospace Centre enabled a paralyzed woman to lift a drink to her lips with a thought-controlled robotic arm. 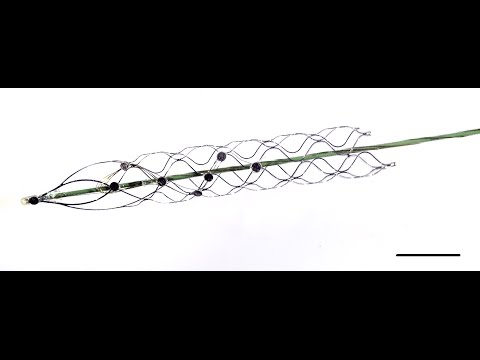 Speaking to AFP, Oxley said that all the other brain-machine interface technologies had involved inserting an electrode directly into the brain.

He said the aim was for the new device to work much like a cardiac pacemaker, which is typically inserted without open-heart surgery. "The cardiac pacemaker is essentially the classic bionic device -- it goes inside a vein, it sits next to the heart and it works for a lifetime," Oxley said.

"And we are essentially trying to do the exact same thing for the brain. Go up a vein, leave it there, and have a lifetime of recordings coming out of it."

It is hoped that the research, which involved 39 scientists from the Royal Melbourne Hospital, the University of Melbourne and the Florey Institute of Neuroscience and Mental Health, could also be used to treat epilepsy, depression and Parkinsons.

A matchstick-sized device (right) called a stentrode is implanted in a blood vessel that sits over the brain.

If we can think it, we can control it.