The New York State Office of Parks has proposed a plan to dewater the American side of the falls to replace a series of aging bridges. Continue reading →

The American side of Niagara Falls could soon run dry, if a new proposal from the New York State Office of Parks achieves regulatory approval.

Over a century old, the concrete arch bridges cross over the Niagara River to provide pedestrian access to Goat Island. Since their construction in 1900, the structures have deteriorated significantly; they were closed in 2004, when park authorities ordered the construction two temporary bridges above the ailing concrete overpasses.

Man Walks on a Tightrope Over Niagara Falls

A new environmental impact reported concluded that the original bridges are too significantly deteriorated to be successfully rehabilitated, and must be completely replaced.

Officials explain that the replacement bridges must be constructed "‘in the dry' [...] to ensure that the new foundations are firmly anchored to bedrock" and to facilitate the complete removal of the original bridge once it is demolished.

While dewatering Niagara Falls may seem like a task of Herculean proportions, more than 80 percent of the Niagara River flows over Canada's Horseshoe Falls. A cofferdam will redirect the entire river over Horseshoe Falls, leaving the much smaller American Falls and Bridal Veil Falls dry.

Although the entire construction process is slated to take two years, the falls will be dewatered for less than six months.

The American side of Niagara Falls was last dewatered in 1969, when the U.S. Army Corps of Engineers conducted a geological survey to investigate erosion of the iconic landmark: 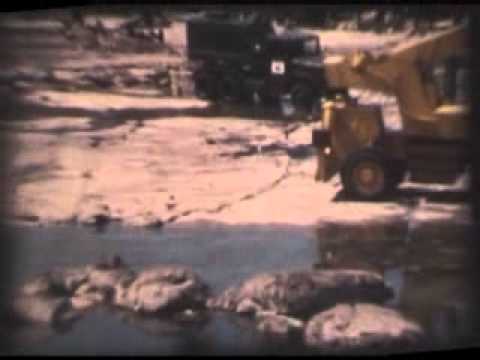 Interestingly, the dry American Falls became a tourist attraction in and of itself, with a reported 89,790 visitors in a single weekend.

This originally appeared on DSCOVRD.

Take a tour of some of the most impressive geological features around the world, as

kicks off worldwide. Above, a special landform at Zhangye Danxia Landform Geological Park, in northwest China's Gansu Province, formed from reddish sandstone that has been eroded over time into a series of mountains surrounded by curvaceous cliffs and many unusual rock formations. Danxia translates to "rosy cloud."

In Culebrita, part of the Culebra National Wildlife Refuge in Puerto Rico, visitors can relax in tidal pools that provide a jacuzzi-like bath -- and which capture small marine life at low tide.

Huge waves from the sea storm smash into the coast of Makurazaki, as Typhoon Vongfong barreled into Japan on Monday morning.

These cascades are one of dozens along the River Skoga in Iceland.

VIDEO: How Much Trash is in the Ocean?

These natural sculptures in Ubon, Thailand, are made of sandstone that's thousands of years old. The “mushroom” shapes have been formed by wind and rain for centuries. They're called Sao Chaliang, which comes from the Thai word “sa liang” meaning stone pillar. Geologists believe that they're the remains of a dried up ocean that existed more than 1 million years ago.

PHOTOS: Leaf Peepers Only: Fall Colors Around the World

Mayon Volcano in the Philippines is currently in seeing a "soft eruption," officials there said Sunday.

These naturally occurring limestone formations in Nambung National Park in Australia are called the Pinnacles. Rising above desert sand dunes, they were formed from the remains of seashells from an era when the area was full of marine life.