Funny thing is, it kind of looks like a Batman vehicle.

Researchers at the University of Southampton have announced successful flight tests for a new kind of biologically inspired aircraft wing. Intended for use in tiny drones called micro air vehicles (MAVs), the design represents a fundamentally different kind of wing template for UAVs.

If the artificial wings most closely resemble the wings of bats, that's entirely by design. The Southampton team built a series of computational models to mimic the physiology of bats, which are the only mammals capable of genuine flight.

The wings aren't just vinyl flappy things, either. They're actually electrically active polymer membranes made to function like artificial muscles. The wings morph on their own in response to changing flight conditions, using different levels of voltage to optimize aerodynamic characteristics - on the fly, as it were.

Such efficiency means the wings can potentially power MAV aircraft over much longer distances. The wings stiffen and relax with changing air conditions, but actually have no mechanical parts of their own.

The MAVs themselves, meanwhile, are being designed in a variety of shapes and sizes - some as small as 15 centimeters across. Researchers say the MAVs have a wide range of potential civil and military applications - such as surveying remote areas or deploying as surveillance units in emergency response scenarios.

In any case, it's been quite the team effort. The membrane wings were developed by University of Southampton and Imperial College London, with additional funding from the Engineering and Physical Sciences Research Council (EPSRC) and the United States Air Force.

Here's some footage of early tests with the membrane wings, on a MAV skimming the surface of a pond. 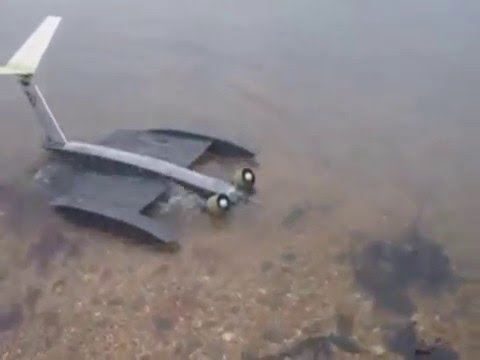