A deep chamber within a South African cave has just yielded a new member of early human lineage – and the species seem to have buried their dead.

A supposed new species of human with an exceptionally small brain and an unusual combination of both primitive and more modern human-like features has been discovered in a remote South African cave chamber, according to research published in the journal eLIFE.

Named Homo naledi, the undated new species is represented by more than 1,500 fossils that belonged to at least 15 individuals.

Estimates reveal that their brains were comparable in size to those of some of the world's first known humans, australopithecines, as well as those of today's gorillas, Chris Stringer of the Natural History Museum in London, who did not directly work on the project, told Discovery News.

Photos: Faces of Our Ancestors

"That brain volume (about 500cc), implies significantly less brain power than recent humans," added Stringer, who authored a paper commenting on the finds.

Lee Berger of the University of the Witwatersrand, Paul Dirks of James Cook University and an international team of colleagues discovered the remains deep within the Rising Star cave system in South Africa's Gauteng province. The Dinaledi Chamber containing the fossils can only be accessed via several steep climbs and fissures.

Discovering the enormous collection of bones "was akin to (archaeologist) Howard Carter moving into Tutankhamen's tomb for the first time...seeing all of this bone material all over the floor," lead excavator Marina Elliott of Simon Fraser University recently told science teacher John Mead of St. Mark's School of Texas during a videocast recorded in the cave.

Berger and his team conclude that Homo naledi's curved fingers, shoulder, trunk and hips are, like its brain, more primitive. The wrist, hands, legs and feet, however, are similar to those of Neanderthals and our own species.

He said the teeth and other features also that this human was a dexterous omnivore that must have hunted and eaten at least some meat.

Multiple mysteries currently surround the discovery. One is the age of the fossils. Berger said it is possible that the new species is more than 2 million years old, putting it fairly close to the origin of the genus Homo. On the other hand, it has not been ruled out that the fossils are less than 100,000 years old.

Yet another mystery concerns how so many Homo naledi individuals, including babies as well as adults, wound up in the chamber. One possibility is that all willingly went to the cave room, where they later succumbed to some kind of tragedy.

"I suppose it is possible that the group hid in the chamber as a refuge from something or somebody and then died there of starvation, but they would have had to access the dark zone of the cave through difficult terrain," Stringer said.

Meanwhile, some human origins experts are not convinced by the Homo naledi claims.

Anthropologist Ian Tattersall of the American Museum of Natural History told Discovery News that he congratulates the researchers "for moving so fast and sharing the information so quickly." Tattersall thinks this push to rapidly get the information out, though, means that the papers "provide more of a progress report rather than a definitive statement."

"I would not have classified the remains as belonging to our genus Homo," Tattersall continued. "In fact, after looking at the photos of the fossils, they may represent more than one species."

He believes that scientists have expanded our genus too much in recent years, "adding bit by bit at the end, when there really is no clear definition now of what Homo is."

Stringer did say that other remains claimed as being human may "not rightly belong in the genus Homo." He supports the theory that our genus is "polyphyletic," meaning that some members might have originated independently in different regions of Africa.

Despite all of the questions surrounding just who wound up in Rising Star cave long ago, Stringer believes the recent find is important.

As he wrote in his published commentary, "While many have concentrated on East Africa as the key and perhaps sole region for the origins of the genus Homo, the continuing surprises emerging from further south remind us that Africa is a huge continent that even now is largely unexplored for its early human fossils."

Casts of Homo naledi fossils, including its skull, hand and jaws, will be unveiled to the public at the Natural History Museum on September 25. They will then go on permanent display in a new Human Evolution gallery, set to open at the museum during the end of November. 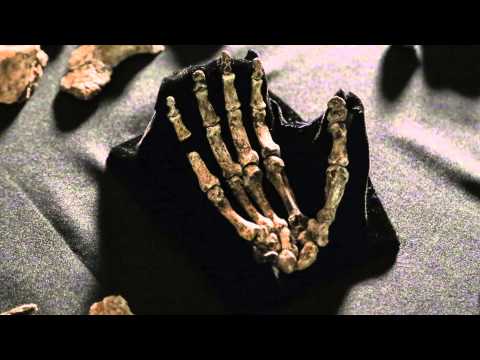 A reconstruction of Homo naledi.

Back in the Beginning

To put a human face on our ancestors, scientists from the Senckenberg Research Institute used sophisticated methods to form 27 model heads based on tiny bone fragments, teeth and skulls collected from across the globe. The heads are on display for the first time together at the Senckenberg Natural History Museum in Frankfurt, Germany. This model is Sahelanthropus tchadensis, also nicknamed "Toumai," who lived 6.8 million years ago. Parts of its jaw bone and teeth were found nine years ago in the Djurab desert in Chad. It's one of the oldest hominid specimens ever found.

With each new discovery, paleoanthropologists have to rewrite the origins of man's ancestors, adding on new branches and tracking when species split. This model was fashioned from pieces of a skull and jaw found among the remains of 17 pre-humans (nine adults, three adolescents and five children) which were discovered in the Afar Region of Ethiopia in 1975. The ape-man species, Australopithecus afarensis, is believed to have lived 3.2 million years ago. Several more bones from this species have been found in Ethiopia, including the famed "Lucy," a nearly complete A. afarensis skeleton found in Hadar.

Meet "Mrs. Ples," the popular nickname for the most complete skull of an Australopithecus africanus, unearthed in Sterkfontein, South Africa in 1947. It is believed she lived 2.5 million years ago (although the sex of the fossil is not entirely certain). Crystals found on her skull suggest that she died after falling into a chalk pit, which was later filled with sediment. A. africanus has long puzzled scientists because of its massive jaws and teeth, but they now believe the species' skull design was optimal for cracking nuts and seeds.

The skull of this male adult was found on the western shore of Lake Turkana in Kenya in 1985. The shape of the mouth indicates that he had a strong bite and could chew plants. He is believed to have lived in 2.5 million years ago and is classified as Paranthropus aethiopicus. Much is still unknown about this species because so few reamins of P. aethiopicus have been found.

Researchers shaped this skull of "Zinj," found in 1959. The adult male lived 1.8 million years ago in the Olduvai Gorge of Tanzania. His scientific name is Paranthropus boisei, though he was originally called Zinjanthropus boisei -- hence the nickname. First discovered by anthropologist Mary Leakey, the well-preserved cranium has a small brain cavity. He would have eaten seeds, plants and roots which he probably dug with sticks or bones.

This model of a sub-human species -- Homo rudolfensis -- was made from bone fragments found in Koobi Fora, Kenya, in 1972. The adult male is believed to have lived about 1.8 million years ago. He used stone tools and ate meat and plants. H. Rudolfensis' distinctive features include a flatter, broader face and broader postcanine teeth, with more complex crowns and roots. He is also recognized as having a larger cranium than his contemporaries.

The almost perfectly preserved skeleton of the "Turkana Boy" is one of the most spectacular discoveries in paleoanthropology. Judging from his anatomy, scientists believe this Homo ergaster was a tall youth about 13 to 15 years old. According to research, the boy died beside a shallow river delta, where he was covered by alluvial sediments. Comparing the shape of the skull and teeth, H. ergaster had a similiar head structure to the Asian Homo erectus.

This adult male, Homo heidelbergensis, was discovered in in Sima de los Huesos, Spain in 1993. Judging by the skull and cranium, scientists believe he probably died from a massive infection that caused a facial deformation. The model, shown here, does not include the deformity. This species is believed to be an ancestor of Neanderthals, as seen in the shape of his face. "Miquelon," the nickname of "Atapuerca 5", lived about 500,000 to 350,000 years ago and fossils of this species have been found in Italy, France and Greece.

The "Old Man of La Chapelle" was recreated from the skull and jaw of a Homo neanderthalensis male found near La Chapelle-aux-Saints, in France in 1908. He lived 56,000 years ago. His relatively old age, thought to be between 40 to 50 years old, indicates he was well looked after by a clan. The old man's skeleton indicates he suffered from a number of afflictions, including arthritis, and had numerous broken bones. Scientists at first did not realize the age and afflicted state of this specimen when he was first discovered. This led them to incorrectly theorize that male Neanderthals were hunched over when they walked.

The skull and jaw of this female "hobbit" was found in Liang Bua, Flores, Indonesia, in 2003. She was about 1 meter tall (about 3'3") and lived about 18,000 years ago. The discovery of her species, Homo floresiensis, brought into question the belief that Homo sapiens was the only form of mankind for the past 30,000 years. Scientists are still debating whether Homo floresiensis was its own species, or merely a group of diseased modern humans. Evidence is mounting that these small beings were, in fact, a distinct human species.

Bones can only tell us so much. Experts often assume or make educated guesses to fill in the gaps in mankind's family tree, and to develop a sense what our ancestors may have looked like. Judging from skull and mandible fragments found in a cave in Israel in 1969, this young female Homo sapien lived between 100,000 and 90,000 years ago. Her bones indicate she was about 20 years old. Her shattered skull was found among the remains of 20 others in a shallow grave.