Some whales get by swallowing tons of tiny things at once, and now researchers are gaining a better understanding of how it's done, thanks to new tags.

Members of a family of baleen whales called rorquals make a living opening their enormous hinged jaws and taking in huge gulps of water that hold krill or fish, then filtering the water to eat the goodies. The activity itself is well known, but some of the mechanics behind the big gulp are not.

To learn more about it, researchers from Stanford University's Hopkins Marine Station turned to a new type of sensor and a "top-of-the-whale" video recorder. Their findings are published in a new study in the journal Current Biology.

RELATED: Humpback Whale Swims in a Headstand in Rare Footage

Rorquals include blue whales, minkes, and humpbacks. They swim along at about 13 feet per second, open wide, take in their prey, and then slow down to filter their catch. It's called lunge feeding, and when it's feeding season they do it pretty much all of the time.

But for 160-ton behemoths like blue whales, it's a costly way to eat, in terms of energy expenditure. They have to time the jaw-opening just right to snare their prey, all the while having to slow down, thanks to the drag effect of opening their enormous maws to take in nearly 1.5 times their own mass in water and fish.

"When these animals dive down to 300 meters, holding their breath for 12 minutes or more, they had better be sure it's worth the cost," said the study's lead author David Cade, in a statement.

Study co-author Jeremy Goldbogen theorized a decade ago that the whales wait until they hit peak speed before they open their jaws, while another theory held they opened wide seconds before top speed. Trouble was, neither idea could be tested with the sensor technology available at the time, which lacked the ability to capture key movements.

The Stanford scientists teamed with other whale experts and a group of engineers to build a better sensor, one that melded video capabilities with new movement-capture technology to gain insight into the mechanics behind the giants' swimming and feeding.

They tagged the new suction-cup sensors on whales off the east and west coasts of the United States as well as off South Africa and the southern tip of South America. Here's a glimpse of what it looks like if you're sitting on top of a whale: 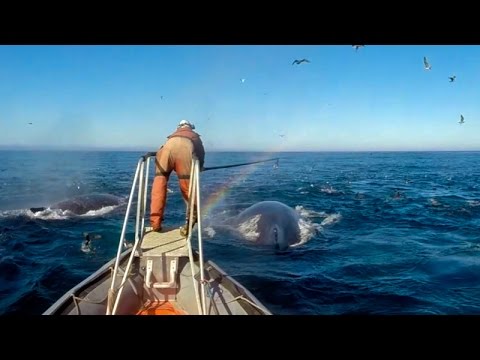 And what have they learned so far? It turns out the whales indeed open their mouths at top speed, closing them when they regain normal speed.

Humpback whales, though, varied their timing when they fed on fish instead of krill. The scientists think that's because fish are more evasive than krill, so the whale's approach needs to be varied. Too, they suggest that the energy boost the whales get from fish vs. krill is worth expending energy in a less-than-ideal fashion.

RELATED: Most Humpback Whales Dropped from US Endangered List

Despite humpback whales' upcoming removal from the U.S. endangered species list, the scientists noted that other rorquals, such as the fin and sei whales, will still be endangered. The more that can be learned about them, they said, the better the chance of helping them survive.

"Because they operate on an energetic knife-edge, any changes in the environment related to their food supply could have profound impacts on individual and population health," said Goldbogen.