The newly discovered seadragon was found by accident, pointing up the potential for finding new ocean life. Continue reading →

I love it when we think we know something and then it's like, "not so fast..."

In this case, it was thought that there were two species of seadragons, those delicate, leafy-looking sea creatures that look like sea horses, but are bigger.

But scientists at Scripps Institution of Oceanography at UC San Diego and the Western Australia Museum (WAM), while examining seadragon samples from Australia, noticed something odd about the sample's DNA, according to a press release.

They asked to see a full specimen and got a faceful of discovery: it was a completely new species that was a deep red color, unlike the orangey Leafy Seadragon or the yellow-and-purple Common Seadragon.

"It has been 150 years since the last seadragon was described and all this time we thought that there were only two species," said marine biologist Nerida Wilson of WAM in the release. "Suddenly, there is a third species! If we can overlook such a charismatic new species for so long, we definitely have many more exciting discoveries awaiting us in the oceans."

There are about five Ruby Seadragon specimens in the world at this point, one of them from 1919, the press release said.

The researchers intend to mount a search expedition for more of the new species, probably deeper in the ocean than the other species, where its red color would help with camouflage in the dim light.

Below is a rotational view of the 3-D Ruby Seadragon. 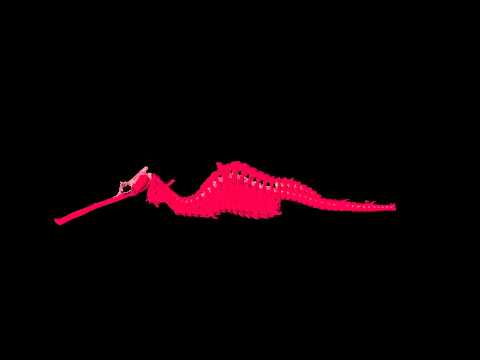 This is a specimen of the Ruby Seadragon.

No matter the species, human or otherwise, it's tough being a parent. In honor of Fathers' Day, take a moment to get acquainted with some of the animal world's best dads. With a baby face like that, it's probably not hard for a father tamarin to love his offspring. Marmosets and tamarins, small monkeys in the subfamily Callitrichinae are native to the Amazon rainforests and are known for being good helpers for mothers. Females generally give birth twice a year to twins and it's the dad's job to care for the young while the mother recuperates. Tamarin fathers, such as the one pictured above, are known to carry their young around on their back and bring them to the mother for feeding.

It’s a cold, cold world out there -- literally -- if you’re an emperor penguin chick hatching in the sub-zero temperatures in Antarctica. But these chicks have quite the devoted dad to keep them warm. Emperor penguins mate in the winter. The female lays an egg, rolls it onto dad’s feet, and then promptly takes off- leaving dad to care for the egg. Emperor penguin dads must fast for more than 100 days as they wait for their chicks to hatch. They endure extreme cold and wind, and have even been seen huddling in large groups doing "the wave" to keep warm. If mom doesn’t return in time for the hatch, the dad will produce a curd-like substance in his esophagus to feed the chick. Chicks are carried around on the parents' feet, as they depend on warmth from their parents to survive while they grow from their thin baby down to full feathers. Childcare is generally split between the two parents as they take turns heading out to sea to feed. Talk about a warm and loving dad.

Male rheas may not be loyal or devoted to one female, but they’re definitely loyal and devoted dads. Male rheas build a nest and then mate with multiple females that then lay all of their eggs together in the same nest -- sometimes amounting to more than 50 eggs. Dad is tasked with incubating and raising the young. The massive, flightless rhea is famously aggressive in guarding its brood and has even been known to attack female rheas that get too close to its young. Male rheas will keep their chicks close for about six months. It’s also common to see the chicks nesting and nuzzling into their dad’s feathers for warmth and protection.

Seahorse dads might have it easier than most because of their unique appearance. They can camouflage with their surroundings; they have built-in pouches to carry their babies; and they even have eyes that can move independently of each other. (Remember all the times it seemed like your parents had eyes in the back of their heads?) But what makes seahorse dads some of the best in the ocean is the unique birthing process of the species. The dad is the one that takes on the burden of pregnancy. The female seahorse lays her eggs in the male’s pouch. He fertilizes them and then provides them with the nutrients they need to grow, in a womb-like fashion. Pregnancy lasts anywhere from two weeks to a month, depending on the water temperature: the hotter the water, the shorter the pregnancy. The birthing process generally takes place at night and lasts for several hours as dear old dad pushes out 100-200 babies, on average. While the young are on their own after that, we still think seahorse dads deserve to make this list for taking the wonders of childbirth off the hands -- er, tails -- of mom.

While being grounded is every human kid’s nightmare, literally caging its young in a nest is part of what makes the greater hornbill such a great dad. Greater hornbills are native to Asia and prominently identifiable by their huge golden horn, called a casque. After mating with a female, the male hornbill will help the female enclose herself and their eggs in the hollow of a tree for safekeeping from predators. The male feeds the female through a small opening while she incubates the eggs. Generally, only one out of two eggs will hatch. Shortly after the chick hatches, the mother breaks her way out of the nest. But these parents aren’t done yet. With the help of the chick, they rebuild the “wall,” shutting him or her in. Mom and dad bring food by regularly, feeding the chick until its old enough to break out of the nest and live on its own.