Once attached to a shark, the camera can record high definition footage at 30 frames per second for just over 24 hours.

Video cameras have been attached to sharks before, but a new project involving a team of leading scientists and engineers could reveal never-before-seen footage of great white sharks at the mysterious "Shark Café," a remote place in the Pacific where the predators hang out each year.

Great whites are essentially dictating the needs of the project, called the "Shark Café Camera," since the video cameras must withstand distances and depths traveled by the sharks over their long annual migration to the café, which is located at an approximate midpoint between Baja California and Hawaii.

The greatest challenge, software engineer Thom Maughan told Discovery News, "is to attach a camera tag with sensors to a great white and have it on the shark for many months."

WATCH VIDEO: "How DO Sharks Have Sex?"

A few years ago, another research team with members from the University of Hawaii and the University of Tokyo managed to outfit sixgill sharks with sophisticated sensors and video recorders. The breakthrough project was a scientific first, according to the American Geophysical Union, given that it successfully provided a shark's eye view of the ocean and revealed that these sharks use powered swimming more than gliding motions as they travel.

"These instrument packages are like flight data recorders for sharks," Carl Meyer, a researcher at the University of Hawaii, said. "They allow us to quantify a variety of different things that we haven't been able to quantify before." 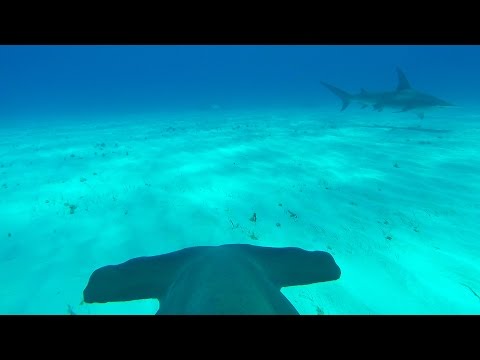 Now Maughan, shark expert Sal Jorgensen and their colleagues at the Monterey Bay Aquarium Research Institute are preparing for the groundbreaking Shark Café Camera project. One of the first steps was to evaluate various video cameras. The MBARI group decided to work with ReplayXD cameras that are used in off road racing and bicycling.

Maughan said that such cameras "have the resolution and low light capability, along with the form factor, which allows us to repackage the cameras for depths up to 4,921 feet." He said the team is leveraging other technologies in the design, including integrating sensor tags from the companies Desert Star and Customized Animal Tracking Solutions.

The researchers studied where best to place the cameras on the sharks. One possibility they explored was having a camera towed by a line attached to the shark. This setup, however, would cause the camera to be whipped around on the line as the shark executes deep dives and other swift moves.

They decided instead to affix the video cam/sensor machinery to the shark's iconic triangular upper fin.

"The dorsal fin is nature's camera tripod when it comes to white sharks," Maughan said. "We can get a clear, stable video from the shark's perspective."

Early models used acrylic housings that were designed to withstand 2000 pounds of pressure per square inch. After the team refined the electronics, they began to experiment with polymers such as epoxy and urethane. Due to the success of those tests, they are now working with a strong epoxy that can be poured without producing bubbles.

Once attached to a shark, the video camera can record high definition footage at 30 frames per second for just over 24 hours, based on storage. Battery power is limited to 10 hours, but the researchers have incorporated highly efficient solar cells to harvest energy and extend the recording time by several hours.

"The trigger for turning on the video is done by detecting the shark behavior," Maughan said.

He explained that depth sensor data from sensor tags has shown that male white sharks engage in a feat known as "rapid oscillatory diving," which involves up and down "yo yo" dives from near the surface to over 820 feet deep. These happen about 150 times per day at the Shark Café.

"This is a lot of energy for a 16-foot animal to expend, especially since they may not have eaten since they left the coast of California a couple months before," Maughan said. "The simple question is: are they eating or mating? The area of the Shark Café is thought to be the desert of the ocean, so it would be very interesting if there is a food web in that region."

After a shark performs a set of these dives, the camera will start to record and ideally will capture footage of whatever prey or mate the great white is after.

The camera tags, which will be affixed to great whites in December and January, will be programmed for release in August/September 2017. At that point, the tags will float to the surface and will be located by the researchers via an Argos satellite link.

Maughan said, "We then must physically recover the camera tag to get the video."

Thus far, the cameras have been tested during short deployments in South Africa, and have also undergone testing on AUVs (autonomous underwater vehicles) that can be programmed to behave like a shark. Still more testing is planned before the equipment is attached to great whites later this year ahead of their lengthy journey to the Shark Café.