Its distinctive mating call helps scientists distinguish the creature from already known frogs with which it was often confused.

A new frog species has been found that ranges from Connecticut to North Carolina and emits a distinct call that sounds more like a cough than a croak. The find not only welcomes a new frog to a life of recognition and a fancy classification name, but it also confirms claims of its existence that had long ago been discounted.

A research team led by Rutgers University has proven the existence of a frog now dubbed the Atlantic Coast leopard frog (a.k.a, Rana kauffeldi), detailing the find in a paper just published in the journal PLOS ONE.

The kauffeldiin its name was used in honor of ecologist Carl Kauffeld, a respected expert in reptiles and amphibians who in 1937 claimed the tiny frog existed but whose assertion did not gain traction in the scientific community.

With better observational tools in hand more than 70 years later, the researchers thought it fair to give Kauffeld, once the director of the Staten Island Zoo and the American Museum of Natural History, his due by honoring his work in the naming of the frog he'd written about so long ago.

VIDEO: Frog Hears with Its Mouth

The new frog was never considered a new species because it was closely related to two other leopard frogs, one to the north of it and one to the south (the northern and southern leopard frogs). But it was spotted on Staten Island six years ago by Rutgers doctoral candidate and lead author of the study, Jeremy Feinberg.

After that encounter in 2008, the frog received a closer look.

With molecular tools to study the creature's genetics and bio-acoustic techniques to listen in closely on its call, Feinberg and his colleagues were able to confirm that the frog was indeed a new species.

The call was among the things that set the new frog apart. It sounded more like a cough than the "croak" we're all used to hearing. Check out the video below for a look and a listen to the Atlantic Coast leopard frog coughing in action. 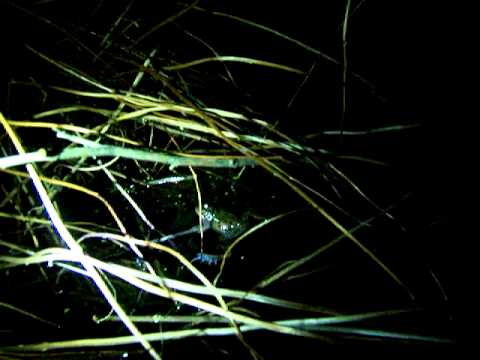 To get a fix on its habitat, the researchers sought observation information -- where the frog lived, what it looked and sounded like -- from professional and recreational frog enthusiasts from Massachusetts down to Virginia. Some of the observations were passed on from the North American Amphibian Monitoring Project, a government project that observes frog habitats to determine if populations are declining.

It turned out, after the frog sightings were plotted, that Rana kauffeldi was a sort of "I-95 corridor" frog, living in an extended range along the Atlantic Coast.

"It is incredible and exciting that a new species of frog could be hiding in plain sight in New York City and existing from Connecticut to North Carolina," said Joanna Burger in a press release. The Rutgers professor in the department of cell biology and neuroscience, and Feinberg's advisor, added: "The process of recognizing, identifying and documenting a new species is long and arduous but it is important for our understanding of the wide ranging wildlife in urban as well as other environments."

The cocoa frog is one of six new frog species that were recently found in a rainforest-dominated mountainous region of southeastern Suriname. “At a time when so many frog species are declining and undergoing extinctions worldwide, it is particularly uplifting to discover so many new frogs in a single area,” Trond Larsen, a tropical ecologist and director of the Rapid Assessment Program at Conservation International, told Discovery News. He and his team found about 60 new species in the South American country.

The tiny Lilliputian beetle measures just 2.3 mm long and could be the smallest dung beetle in the entire Guiana Shield and among the smallest in the world. “Dung beetles act as a cleanup crew in the forest,” Larsen said. “By burying dung, they not only control parasites and disease, including those that affect people, but also disperse seeds and recycle nutrients that enable forest regeneration.”

Leeanne Alonso, director of Global Biodiversity Exploration for Global Wildlife Conservation, went on the expedition with Larsen. She thinks this beetle might be small and red to look like a seed stuck in poo, thereby fooling predators. “Dung beetles in forest areas are a good indicator of mammal diversity,” she added. Without mammals providing their food source, there would be few such insects.

The collection of new animals includes 11 species of fish that are probably new to science. “Small, brightly-colored tetras similar to this one are popular in the aquarium trade, and sustainable exports of wild species could provide financial support to local communities and incentives to conserve the species’ natural habitat,” Larsen said.

Alonso added that, as new species go, fish are relatively rare. “It’s amazing that so many were found in this region, which I believe has the world’s best and most beautiful and pristine forests in the world.” She loved it so much that she took her family there on a vacation after the research work ended.

Bats are another “good indicator of habitat quality,” Alonso said. She explained that, in this case, the bat thrives on fruit, so the region must support plenty of healthy fruit-producing trees.

Genuine coral snakes are highly venomous, but this false coral snake’s name is itself somewhat misleading, as the researchers found out the hard way. Alonso said that a helicopter pilot transporting the scientists was bitten by one. “His arm really swelled up,” she said, explaining that all such snakes have sharp teeth and venom, just not as poisonous as the “real” coral snake this species resembles.

This extraordinary new insect displays waxy fronds at the end of its body that was built for jumping among plants. “Maybe the fronds are meant to resemble anthers of a flower, helping with camouflage?” Alonso said, admitting that nature sometimes works in still-mysterious ways. She continued, “So little is known about insects from this region, so this was a real find.”

Top-level predatory big cats, such as this margay, are yet another sign of healthy habitat. More of them generally means there are more prey animals to feast upon. “Margays love to sleep and hide in caves at the site,” Alonso added.

Six new katydids, including this one, were discovered. Larsen described it as a “gangly species with oversized, spiny hind legs.” The newly discovered katydids "are indicative of the pristine, healthy forests of the Upper Palumeu Watershed," Larsen said, "and the forests in turn help to ensure continued flows of clean, plentiful water used by people throughout the rest of the country.”

“Despite their generally diminutive size, water beetles can be useful indicators of water quality, and also help to filter and keep water clean,” Larsen said. “Many of the 26 new water beetle species discovered on this survey are probably restricted to isolated habitats, especially in the mountains of southeastern Suriname, and may occur nowhere else.”

Eleven new fish species were found in the region, dubbed a "tropical Eden" by the researchers. Larsen said, “This new sucker-mouthed armored catfish was rare, and only encountered in the narrow, upper reaches of the Palumeu River.

“This delicate slender opossum is really cute,” Alonso said. “It’s hard to find small mammals like this, which are indicative of primary forest.”

is the largest of all South American dung beetles, Larsen shares. Despite its name, this species feeds more frequently on dead animals than on dung. A highly unusual case in the Animal Kingdom, both males and females of this species possess a long horn on their head, which they use during intense battles with other individuals of the same sex. The vast difference in adult body size seen here is primarily determined by how much food was available to the developing larva. This species is capable of rapidly burying large animal carcasses, providing an important ecological service that sustains rain forest health.

“Given the beautiful coloration, high visibility and popularity of frogs in the poison dart frog family (Dendrobatidae), most species in this group are relatively well known,” Larsen said. “Therefore, the discovery of this species potentially new to science is particularly exciting. The toxic secretions of poison dart frogs hold great potential to yield new medicines that could greatly benefit the world -- yet with frogs declining globally, their protection in the wild is essential.”

The researchers could have just scratched the new species surface in southeastern Suriname, given that other animals, fish, insects and more unknown to science could be found there. The region’s human population is currently small -- only about 500,000 -- but it’s growing and there is a threat of future habitat-destroying activities, such as mining and logging. Alonso hopes that the wilderness can be protected, with money-generating activities such as ecotourism allowing both humans and amimals to thrive there.