At least 130,000 years ago, a Neanderthal decided to decorate a cave with an eye-catching striped rock.

Around 130,000 years ago, a Neanderthal in what is now Croatia eyed a pretty striped chunk of limestone and picked it up. He (or she) then carried it to a favorite cave for just one reason, according to researchers who just discovered the rock: the Neanderthal thought it looked really cool.

The discovery, reported in the journal Comptes Rendus Palevol, provides some of the earliest known evidence that early humans collected rocks. It also adds to the growing body of evidence that Neanderthals appreciated beauty and had a sense of curiosity as well as symbolic-like capacities normally associated with modern humans.

"Neanderthals are generally considered to be dull-witted and savage, compared to modern Homo sapiens," co-author David Frayer told Seeker. "As more and more evidence is being accumulated, their sophistication is being better appreciated. Our work on this rock is just another little piece of evidence that they were not the clods many assume they were."

Frayer, a professor emeritus of anthropology from the University of Kansas, lead author Davorka Radovčić of the Croatian Natural History Museum in Zagreb and their team analyzed the rock, which was found at a site called Krapina. The object is roughly five inches long, four inches high and about a half-inch thick. Made of brown limestone, the rock features natural dark striations and a reddish hue on its corners. When wet, the stripes and redness become even more pronounced.

RELATED: Our Connection to Hobbits, Neanderthals and Other Ancient Humans Deepened in 2016

Frayer says that if he or his colleagues had come upon the rock as the Neanderthal did, "we would have likely taken it home with us. It is unique in the collection of 1000-plus tools in its brown color and the black inclusions ... It was never flaked and was not used as a tool. We think it was collected as a curiosity, just as someone might pick up a piece of petrified wood in the California desert."

The scientists think that the rock was either picked up just over a mile north of Krapina, where there are known outcroppings of this type of stone, or the Kraponica stream could have transported it closer to the cave site.

Social animals aside from humans are also known to collect interesting objects just because they like the look of them. Male bowerbirds, for example, collect pretty stones and other natural bling to attract females. Crows and ravens have been observed grabbing unique stones and staring at them for lengthy periods, but the jury is still out on what they are actually doing with the rocks.

Neanderthals weren't only interested in rocks, either. Prior research found that these early humans from Europe and Asia also collected interesting-looking teeth, shells and bird feathers, which they modified to wear as jewelry.

While people of European and Asian heritage are related to Neanderthals, retaining DNA from these humans in their genomes, it's still a mystery why Neanderthal populations died out.

Frayer said that "most people think their population density was very low and that they were susceptible to extinction because of it. Our work does not answer this question, other than to stipulate that they were not as stupid and cultureless as many still assume."

He added that he and his team are still analyzing finds excavated at Krapina, and "there is more to come from this important site."

WATCH: Did We Eat All the Neanderthals? 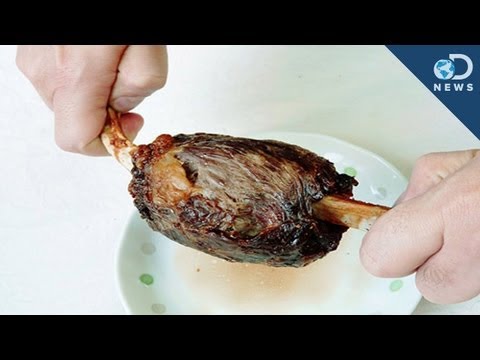