These new images are the clearest yet and reveal that in some places the rim of the odd crater is nearly vertical, rising about 1 mile from the floor.

From a vantage point about 915 miles above the surface of Ceres, a dwarf planet in the main asteroid belt, NASA's Dawn spacecraft captured some of the best views yet of an odd crater that has mysterious bright white spots on its floor.

The pictures are about three times better resolution than Dawn's previous images, but scientists are still mulling over what the spots could be.

The new images also revealed that in some places the crater's rim is nearly vertical, rising about 1 mile from the floor.

Over the next two months, Dawn is expected to map Ceres six times, with each orbit at a slightly different angle so scientists can piece together stereo and three-dimensional views.

Scientists suspect Ceres, which is about 590 miles in diameter, may have had an underground ocean at some point and could still have liquid water beneath its icy surface.

We STILL Don't Know What Those Bright Blobs on Ceres Are

Before arriving at Ceres in March, Dawn spent 14 months exploring Vesta, the second largest object in the asteroid belt, located between Mars and Jupiter. 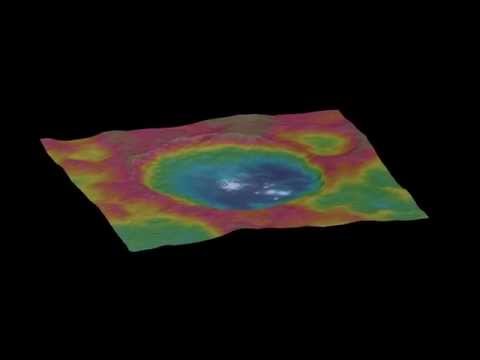 A newly released image from NASA’s Dawn spacecraft zooms in on mysterious bright spots seen on the surface of the dwarf planet Ceres, the largest object in the main asteroid belt.

The term "dwarf planet" wasn't defined until the infamous International Astronomical Union (IAU) vote in 2006, but this year, 9 years later, we are beginning to get our first ever close-up views of two of our solar system's most famous dwarf planets: Pluto and Ceres.

Currently spiraling in on Ceres, the innermost dwarf planet inhabiting the asteroid belt between the orbits of Mars and Jupiter, NASA's Dawn spacecraft is slowly revealing a cratered and complex world, details of which that have so far eluded even Hubble's powerful vision. Dawn is scheduled to make final orbital insertion around Ceres in March 2015 where it is destined to remain after its fuel runs out as a permanent human-made satellite of Ceres. A comparison image of the Hubble and Dawn views of Ceres is shown above.

But Dawn is just the first dwarf planet encounter of 2015. In July, NASA's New Horizons mission will flyby Pluto and its system of moons, exploring the mysterious Kuiper Belt. Between Hubble's blurry observations of Ceres and Pluto and this year's NASA encounters, many artists' impressions of these enigmatic worlds have guessed at what lies in store for our robotic explorers. But how do they measure up now we are beginning to see Ceres' and Pluto's surfaces?

This artist's impression of Ceres shows NASA's Dawn spacecraft in orbit around the dwarf planet. As opposed to an ice encrusted world, this visualization shows a cratered, moon-like surface.

Again with Dawn in view, this artist's impression shows an active Ceres complete with water vapor escaping from a possible sub-surface ocean. Water vapor was detected in the vicinity of Ceres by Hubble, so Dawn will be on the look-out for any trace of geysers venting water.

As seen by Hubble from afar, curious white patches and possible variations in Ceres' surface composition can be seen. However, any detail in these images have so far prevented planetary scientists from fully understanding the dwarf planet's true nature.

NEWS: What is That Mysterious White Blob on Ceres?

But now, as Dawn fast approaches orbital insertion, we're being treated to a bounty of data that shows a possibly ancient, rocky surface. Those curious white patches originally spied by Hubble are also snapping into view -- but what are they? Theories abound, but they may be tentative signs of subsurface water escaping to space and freezing on the surface. These are all signs of cryovolcanism, a dynamic that may dominate dwarf planet surface morphology.

From afar, NASA's Dawn mission is able to watch Ceres rotate, as this series of observations on Feb. 4 shows.

As Dawn gets up-close and personal with Ceres, the drama in the outer solar system is only just beginning to unfold. After 9 years of flying toward Pluto, NASA's New Horizons mission has begun approach preparations for its flyby in July.

From ground-based and Hubble observations, there at tantalizing clues that this frozen world has a surprisingly dynamic surface with a thin atmosphere that changes during Pluto's 248 year orbit around the sun. In this artist's impression of New Horizons flying over Pluto, an atmosphere has been included with cryovolcanos -- the latter of which planetary scientists hope to confirm in July.

Pluto has a system of known moons, the largest of which, Charon, may be considered to be Pluto's binary partner. As Charon orbits Pluto, its powerful gravitational field tugs the dwarf planet off center, a dynamic that New Horizons has observed as it approaches.

This artist's conception shows Pluto's moon Charon eclipsing the dwarf planet. Twice every orbit around the sun, each world eclipses the other.

NEWS: Tally-Ho on Targets for New Horizons After Pluto

When Hubble spies on Pluto, it can see the different shades of the dwarf planet's surface rotate. As shown here in these blotchy images, little detail is obvious, but large regions with differing albedo (reflectiveness) may reveal huge craters, vast plains or mountains. But until New Horizons gets close, these regions will remain a mystery.

In this digital illustration rendered from 3-D NASA data of Pluto, an attempt has been made at matching observations with possible surface features.

In July 2014, NASA's New Horizons looked ahead and spied its ultimate goal: Pluto and Charon. Although tiny pinpricks of light, the pair can be seen orbiting one another in a binary dance that shifts Pluto off center. Both masses actually orbit an invisible point in space, above Pluto's surface, known as the Pluto-Charon barycenter. These observations have increased calls for Pluto to be redefined (yet again) as a 'binary planet.'

MORE: Can We Call Pluto and Charon a 'Binary Planet' Yet?

Once NASA's New Horizons mission careens through the Pluto-Charon system, assuming it doesn't hit any debris on its way through, its mission in the Kuiper Belt has only just begun. Hubble is currently being used to identify possible icy targets

the spacecraft's Pluto encounter. Shown here is an artist's impression of another dwarf planet, Eris, that was discovered in 2005. Originally thought to be the

planet of the solar system, its discovery led to the IAU's decision to reclassify these small worlds as dwarf planets, demoting Pluto in the process, leaving us with 8 planets. But as we approach Pluto and begin to understand Ceres, just because they are dwarf planets doesn't mean they're not rich and dynamic places to explore. Our voyage of dwarf planet discovery has only just begun and regardless of our need to classify celestial objects, Pluto and Ceres hold some fascinating clues to planetary formation and solar system evolution.

For more, regularly check on the