Music and Tech Collide at Moogfest 2016

Among the busiest intersections in all of 21st century culture are those interesting plots of conceptual real estate where technology and art meet up.

That's where Moogfest comes in. The four-day culture, music and technology festival - kicking off today in Durham, NC - has become a popular destination for fast-forward thinkers across the country and the world.

If you're wondering about that name, Moogfest is named after visionary engineer and electronic musician Bob Moog, inventor of the Moog analog synthesizer. Moog's instruments and technological contributions made a huge impact on several genres of popular music from the 1970s onward.

More than 250 artists, inventors and tech industry leaders will be featured at this year's festival. Presentations and workshops include appearances by virtual reality pioneer Jaron Lanier and the administrators (human minions?) of IBM's celebrity A.I. Watson.

Moogfest will also host musical and multimedia performances from a roster of artists including GZA, Gary Numan and Laurie Anderson.

The most intriguing elements of this year's Moogfest involve instances where musicians and technology are merging, quite literally. Artist and cyborg activist Neil Harbisson, pictured above, will present a "cyborgacoustic performance" featuring the cybernetic eye permanently attached to his skull.

Harbisson - who can otherwise only see in grayscale - uses his cybernetic eye to hear the frequencies of colors through bone conduction. For his Moogfest performance, he'll be painting the toes of a collaborator and amplifying the colors he hears. It's that kind of festival.

The robotic marimba player Shimon will also be on hand, performing with other (human) musicians and additional musical machines developed by Georgia Tech's Robotic Musicianship group.

Also keep an eye out for seismic dance performances, an A.I. DJ battle, and a demonstration of Instrument 1, a new musical multi-instrument that can be played as a guitar, violin, piano or drum. You can get more details at the Moogfest website. 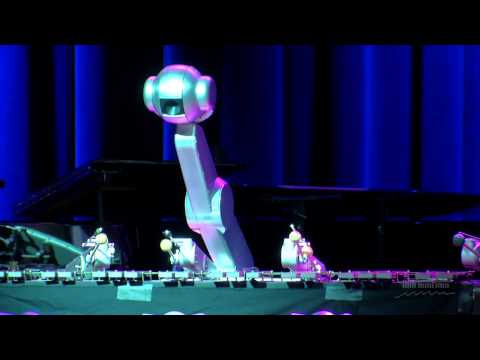 In the dead of winter, Amsterdam gets about seven-and-a-half hours of low-laying sunlight. But thanks to the city's annual light festival -- which runs from November 28, 2015, until January 17, 2016 -- residents look forward to sunset, to when dozens of gorgeous light sculptures come to life. Here, we take a look at a handful of the pieces illuminating waterways and walking paths this year, all of them dedicated to the theme of friendship.

In Indian rituals, the circular mandala is a symbol for unity. Here, artists Macarena Meza and Daniela Orellana create the top half of a mandala above the water, allowing the reflection to represent the bottom half, making the work complete.

According to artists Victor Engbers and Ina Smits, Strangers in the Light embodies the diversity of residents in Amsterdam, who pass each other every day on the street, but never meet. When one of the tall sculptures lights up, the other one disappears.

Burning Man: Photos From The Playa

A buckyball is a molecule made of 60 carbon atoms. Here, the sides of this giant buckyball contain panels of artwork by Bianca Leusink to highlight innovations from her hometown of Twente, where the highly regarded University of Twente is based.

The Hills Are Alive With Landscape Art: Photo

The sentence written in light, from Massimo Uberti and Marco Pollice, begs the question: what about tomorrow? But according to Uberti and Pollice, because the word is illuminated as a permanent piece of art, the answer is always yes, since ever day is the day you will be loved.

The Uniting Light Star is a dodecahedron, consisting of twelve pentagonal surfaces -- the same number of stars in the European flag. The strings of blue light that connect the points of the star represent the relationships between the European countries and their residents. The piece was designed by Onne Walsmit, Dirk Schlebusch and Joost van Bergen, who make up the collective Venividimultiplex.

A string of lights over one of Amsterdam's many canals is programmed in such a way that it creates an unpredictable pattern of light, just like the aurora borealis. For artist Aleksandra Stratimirovic, who hails from Sweden where curtains of natural light regularly adorn the evening skies, her piece Northern Lights represents the magical experience of friendship.

The playful Run Beyond from Angelo Bonello for KitonB captures the spirit of friends frolicking on a winter's eve. Says Bonello, "To me this work is about the power of imagination, a power so strong that it makes individuals conquer their fears and limitations and causes them to open up to other cultures, new friendships and unknown worlds."

Many children wear friendship bands on their wrists to symbolize a bond to another person or support for a cause. Here, artists Vikas Patil and Santosh Gujar have produced giant versions of friendship bands in nine different colors. When viewed from different angles, the long row of rings takes on different dimensions and different meanings. For example, when viewed straight on, the bands form concentric rings, each one encircling another. But when viewed sidelong, the rings separate. In this way, the art symbolizes how friendships evolve, how people feel close to others and at times, more distant.

These two "friends" communicate with each other from opposite sides of a canal. Designed by Viktor Vicsek, the Talking Heads don't talk, but express emotions and empathy for each other through different colored lights and patterns. To see more images, visit the festival's