The focus now turns to learning the identity of the adorable cubs' daddy.

Two mountain lion kittens, a male and a female, were found tucked away in a well-hidden den in the Santa Monica Mountains by National Park Service biologists in December.

The adorable cubs have since been tagged with GPS trackers and given the handles P-46 (female) and P-47 (male).

Officials with the Santa Monica Mountains National Recreational Area place a strong likelihood on P-19 as the mother of the newbies. The giveaway was that her own GPS tracker became suspiciously localized during a three-week stretch where, it's presumed, she was in the den staying with her newborns.

Next comes an attempt to name the daddy. P-19 has been tracked since 2010, when she was only weeks old. She's had previous litters, from mating with her father P-12. But, P-12 hasn't been seen since March of last year. Scientists hope DNA testing can rule him in or out. Otherwise, they say, another potential daddy could be a newer male on the scene, P-45.

It may be best to root for P-45, as officials say interbreeding is a serious threat to Santa Monica Mountains' mountain lions, which are hemmed in by human life in the form of structures such as the 101 Freeway. 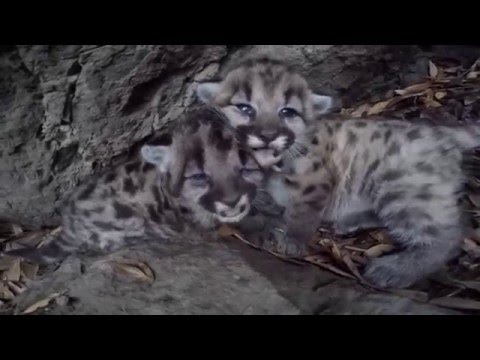 "We continue to see successful reproduction, which indicates that the quality of the natural habitat is high for such a relatively urbanized area," said Jeff Sikich, a biologist for Santa Monica Mountains National Recreation Area, in a statement.

"But," he added, "these kittens have many challenges ahead of them, from evading other mountain lions, to crossing freeways, to dealing with exposure to rat poison."

Two three-week-old white lion cubs from the Belgrade Zoo in Serbia are presently being bottle-fed by zookeepers after they were rejected by their mother. What mother in her right mind would reject these two cuties is a question for another day. For now, let's just enjoy them at play with a stuffed donkey.

The earliest known sighting of white lions in Timbavati took place in 1938. Most white lions today live in zoos, which is just fine with zookeepers.

In 2004, three prides of white lions were successfully reintroduced into the Timbavati region, a long way from where these two will live.

Time to cut him off -- no more bottle.

PHOTOS: Lions Captured in the Wild by 'BeetleCams'

Group snuggle, and time for a nap.