Your Brainwaves Could Soon Be Correcting Robots' Mistakes

Researchers have developed a device that might enable better human control of prosthetics and robots used in industrial settings.

Researchers at MIT and Boston University say they've found a way to turn the brain's recognition that something's wrong into a command that controls a robot, a step that could make it easier for humans and mechanical devices to interact.

The researchers used a cap wired with electrodes connected to an electroencephalogram, or EEG, which monitors brain activity. The device looked for an impulse known as the error-related potential signal. A dozen untrained volunteers wore the cap and watched as a robot sorted two types of objects - paint cans and spools of wire - into different bins.

When the robot moved to drop one of the items into the wrong bin, the system could pick up that error signal and translate it into a command to the robot to change direction, the team behind the experiment reported Monday.

"They're simply watching the robot and when the robot makes a mistake, their brain automatically sends this signal," said Boston University cognitive neuroscientist Frank Guenther, whose laboratory designed the brain interface. "The signal is big enough and similar enough across people that we can detect it on somebody who hasn't ever practiced with this." 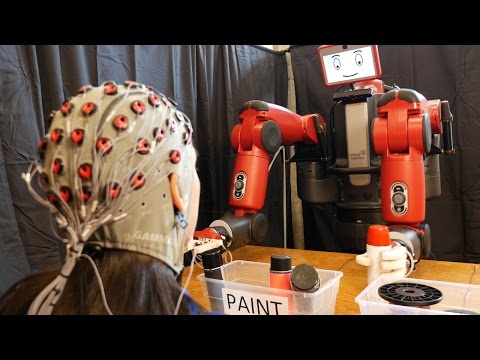 The teams ran the exercise a total of 200 times, with success rates ranging from about 65 percent to 85 percent, Guenther said. The more the humans considered themselves in control of the MIT-designed robot, the more likely they were to send a second, stronger corrective signal, he said.

"Our belief is that's because the person really thinks of it as a mistake they're making, almost, at that point, rather than the robot randomly making a mistake," Guenther said.

The findings were released by MIT on Monday and are scheduled to be presented at an IEEE robotics conference in May.

Earlier studies have shown EEG-linked computers can be turned into a way to control other mechanical devises - raising hopes that these devices can be used to control devices such as wheelchairs or prosthetic limbs. The teams behind this study say they hope their program can provide an easier, more natural way of enabling human control of robotic devices.

And they say their device could be used to create new ways to control robots in industrial work – or to help people with severely paralyzing illnesses who depend on computers to help them communicate.

"The main problem with those systems is they're very slow and laborious to use, and they're not always accurate," Guenther said. "In this case the accuracy problem is fixed by a very straightforward and easy-to-perform thing, which is the person paying attention to what's happening and noticing a mistake occurred."

RELATED: Wiki Bots That Feud for Years Highlight the Troubled Future of AI