With only 97 left in the wild, every new birth counts for the critically endangered species.

The Wolf Conservation Center (WCC), in South Salem, N.Y. had cause to celebrate recently, with the birth of a new Mexican wolf cub, the latest member of a species with only 97 animals left in the wild.

The site reported that mom "F1143" gave birth to the cub on May 4 and that the pup, a male the staff at the center has dubbed "Trumpet," passed his first medical exam with flying colors.

Here's Trumpet at the ripe old age of eight days, taking in his surroundings. He's quiet in this video, but he got his name for the loud sounds he makes: 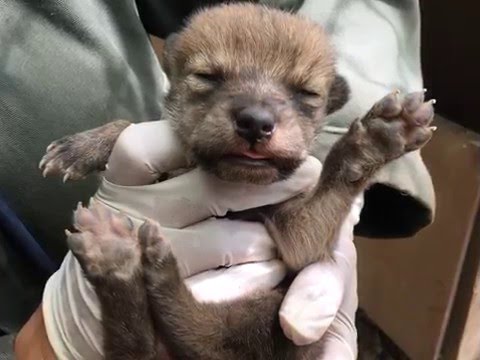 The new pup and his parents can't be seen by the public, but the WCC runs a host of live webcams, if you want to have a look at the special creatures in their habitat.

The Mexican gray wolf (Canis lupus baileyi) is among the most endangered mammals in North America. For a time in the 1980s, they went extinct in the wild, only to be reintroduced in the late 1990s, in a program run under the auspices of the Endangered Species Act.

Today, 54 facilities between Mexico and the United States (including the WCC) work together under a program called the Mexican Wolf Species Survival Plan, which tries to augment the wild population.

U.S. releases into the wild are governed by the U.S. Fish and Wildlife Service (FWS). The agency currently introduces captive wolves through a "pup-fostering" approach, in which captive-born pups are placed with wild litters of similar age, allowing them to grow up in the wild.

Not every captive pup is brought into the wild, however. The world's remaining Mexican wolves are descended from just seven animals rescued from the brink of extinction. So a balance has to be struck between maintaining the genetic health of the species and the desire to regrow the wild population.

Trumpet won't be eligible for pup-fostering into the wild, according to the WCC, because his birth wasn't timed close enough with that of a similar wild litter.

The latest addition to a critically endangered species of wolf was given the nickname "Trumpet," for his boisterous noises.

Even gray wolves like to cool off in the summer with juicy watermelons, as long as those melons are stuffed with pig ears, cheese and dog biscuits. The Wolf Park in Battle Ground, Indiana raises the canids in captivity for research and educational purposes. Every July, the wolves get a watermelon filled with goodies.

This wolf's name is Renki.

Wolfgang, the watermelon-wielding wolf shown here, gets more than just a snack. He puts his natural instincts and abilities to use when presented with the challenge of digging treats out of a melon.

"Giving the wolves enrichment materials, like watermelons, presents the animals with an opportunity to make choices," Elizabeth Rose, the Wolf Park's managing director, told Discovery News. "Giving animals in captivity the chance to make choices helps reduce boredom and keeps their minds in shape, as well as their bodies."

Although wolves tend to hunt livelier prey than watermelons in the wild, the animals use many of the same motor skills and social behaviors they would use while foraging, hunting and sharing a kill.

Renki tends to get the most exited when he gets his watermelon treat, Rose said.

Renki defends his melon, much like a wild wolf would defend a hunk of elk. The Wolf Park staff explains the animals' behaviors to visitors during the melon party.

The Wolf Park opened in 1972 and has held the Watermelon Party for 13 years. The idea for the party came after park staff noted that the wolves were looking longingly at watermelon slices that the humans were eating during a July 4th celebration.

Rose noted that normally the staff don't eat in front of the wolves. However, on that 4th of July someone decided to let the wolf try some watermelon and a tradition was born.

The wolves will receive another seasonal treat in autumn, when the Wolf Park throws the Pumpkin Party.

Life isn't all fruit parties for these wolves. They help scientists research the behavior of canids, the animal group that contains dogs.

Some recent research has focused on the ability of wolves to learn from other wolves, as well as comparisons between dog and wolf behavior in relation to humans.

An Australian shepherd dog may be able to outwit an Irish setter, but research suggests wolves are really the top-dogs in intelligence compared with their domesticated cousins, according to Rose.

Now for a human intelligence test: What is the linguistic connection between this cantaloupe and Fiona, the wolf that is gnawing on the melon?

Answer: The word cantaloupe derived from the Italian for "singing wolf."

The village of Cantalupo, Italy may be where the melon was first bred. The village might have gotten its name from wolves that once roamed the area.

Now, real singing wolves rarely howl around Cantalupo, Italy for the same reasons that wolves face danger in many areas around the world.

In the U.S. wolves were removed from the Endangered Species List in 2011. Alaska, Idaho, Montana, Wisconsin, Minnesota and Wyoming now allow some degree of wolf hunting.

Despite humans, wolves still maintain a huge range over North America, Europe and Asia. The International Union for the Conservation of Nature list gray wolves as a species of least concern.