The small planet Mercury is making a rare transit of the sun today (May 9), the first such event of its kind in a decade, as the world looks on. Case in point: this awesome NASA video (below) captured just as Mercury began its journey across the sun, as seen from Earth.

NASA's powerful Solar Dynamics Observatory recorded this first Mercury transit video as the planet began a 7.5-hour trip across the face of the sun. Another video shows the Mercury transit in a different wavelength of light. The transit, which occurs when Mercury passes directly between the sun and the Earth, began at 7:12 a.m. EDT (1112 GMT) and will be complete at 2:42 p.m. EDT (1842 GMT). You can watch the transit live online at the Slooh Community Observatory, and can also see the Mercury transit webcast on Space.com, courtesy of Slooh.

Today's transit of Mercury is the first one since 2006, and such an event won't happen again until 2019. Mercury transits occur only 13 times per century, so scientists around the world, including here at NASA's Goddard Space Flight Center, are keeping a close eye on the event using ground-based solar telescopes and space-based observatories like the SDO spacecraft. [The Mercury Transit of 2016: How to See It and What to Expect]

When studying Mercury transits, scientists can make measurements that can help refine calculations of the Earth-sun distance, and learn more about Mercury's ultrathin atmosphere (or exosphere, as it's called), said a statement from NASA's Jet Propulsion Laboratory in Pasadena, California. 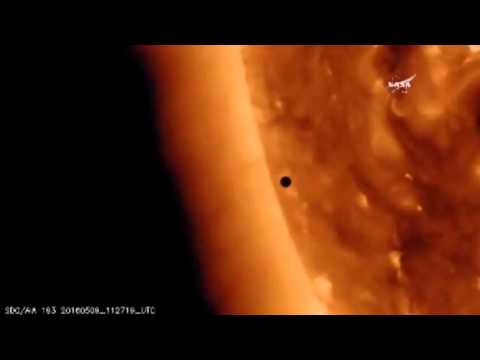 "When Mercury is in front of the sun, we can study the exosphere close to the planet," NASA scientist Rosemary Killen said in the statement. "Sodium in the exosphere absorbs and re-emits a yellow-orange color from sunlight, and by measuring that absorption, we can learn about the density of gas there" on Mercury.

Mercury transits can also help scientist learn how to detect alien planets around distant stars. When a planet like Mercury crosses the face of its parent star, the total amount of light from the star seen by a telescope dips a bit. By searching for this telltale dimming effect around distant stars, astronomers have managed to find more than 1,000 confirmed alien planets.

"Additionally, scientists have begun exploring the exospheres of exoplanets," NASA officials at JPL wrote in the statement. "By observing the spectra of the light that passes through an exosphere - similar to how we study Mercury's exosphere - scientists are beginning to understand the evolution of exoplanet atmospheres as well as the influence of stellar wind and magnetic fields."

Editor's note: Visit Space.com today to see live webcast views of the rare Mercury transit from Earth and space, and for complete coverage of the celestial event. If you SAFELY capture a photo of the transit of Mercury and would like to share it with Space.com and our news partners for a story or gallery, you can send images and comments in to managing editor Tariq Malik at spacephotos@space.com.

Get more from Space.com

Copyright 2016 SPACE.com, a Purch company. All rights reserved. This material may not be published, broadcast, rewritten or redistributed.

This article originally appeared on Space.com.

Mercury, the smallest planet in our solar system and the closest to the sun, took on a number of personas to ancient civilizations. To the Egyptians it was Thoth, the god of knowledge, speech, writing and arithmetic. To the Greeks it was alternatively known as Apollo (the god of truth, arts, archery, plagues, and divination) and Hermes (the god of writing and messenger to the other gods), depending on whether it rose in the morning or evening. But details of the planet beyond its orbit were unknown until we visited it with the Mariner 10 spacecraft 40 years ago.

The Mariner program was born during the Apollo era to explore the inner planets of the solar system. It was a compliment to the Pioneer missions that aimed at the outer giant planets, and the final two spacecraft, Mariners 11 and 12, were eventually repurposed into the Voyager 1 and 2 spacecraft. There were ten Mariner spacecraft built and launched. Three were lost to launch vehicle failures, four went to Mars, two were aimed squarely at Venus, and one was designed to explore Mercury. It was Mariner 10, the last of the series.

Mariner 10, like all the Mariner spacecraft, was octagonal in shape and made of magnesium and aluminum. It was squat and long, measuring about 18 inches high and 4.5 feet in diameter. With its solar panels deployed -- flying toward the sun, it used solar power for electricity -- it measured a substantial 26 feet across. Its science payload was also fairly common for the Mariner family. Its suite of instruments included cameras, a magnetometer, a plasma science experiment, a charged particle telescope, an ultraviolet spectrometer and an infrared radiometer. Mariner 10 launched on an Atlas Centaur rocket on Nov. 3, 1973. Not long after leaving the Earth, it turned around and looked back at our planet, snapping a stunning picture of our home planet and the moon together in one frame.

Its first planetary encounter was with Venus. Mariner 10 took some 4,000 images of the second planet from the sun, revealing little beyond the thick clouds enveloping the planet. Other instruments revealed Hadley-type circulation in Venus' atmosphere, as well as confirmed the existence of a weak magnetic field surrounding the planet and an ionosphere that interacted with the solar wind to form a bow shock. Mariner 10 used its encounter with Venus to slingshot itself on a path to Mercury, the first time a gravity-assist maneuver was done on a multi-planet mission. The spacecraft reached Mercury and made its first flyby on March 29, 1974.

Photos taken as the spacecraft approached its target showed scientists a moon-like surface: the planet was heavily cratered and barren. The spacecraft's magnetometers found only a weak magnetic field. Radiometer readings found temperatures vary significantly on the small world, from -297°F in the dark to 368°F in the sunlight. This first came on March 29, 1974 at a range of 436 miles from Mercury’s surface. A second flyby happened on Sept. 21, 1974; the spacecraft passed 29,868 miles from the surface. The third and final flyby came on March 16, 1975 and it was the closest pass. Mariner 10 flew within 203 miles of the planet’s surface. NASA’s last contact with the spacecraft came less than two weeks later on March 24.

Photographs and scientific measurements taken during the Mariner 10’s three passes revealed a wealth of information about the planet. The mission confirmed that Mercury has no appreciable atmosphere, a small magnetic field, and a relatively large iron-rich core. Just under half the planet was imaged by the spacecraft, and though it was far from uniform in appearance, the planet was found to be uniformly cratered and ragged. Like so many early survey missions, Mariner 10 raised more questions about Mercury than it answered, like, what is the planet’s internal structure? Is there volcanic activity? What is the story behind Mercury’s atmosphere and magnetosphere? Ground-based observations after the mission ended shed some light on the remaining mysteries, as has

, the only spacecraft dedicated to exploring Mercury since Mariner 10 launched.