Mercedes "Vans and Drones" initiative creates a hybrid of the present and the future to optimize shipments.

Probably you've heard about our bright new future of delivery drones. Everyone from the USPS to Amazon is hot on the idea of aerial drones dropping packages from the sky practically into your lap. Even the federal government - typically slow to move - is acting quickly to get regulations into place.

But one pesky little problem remains: How to get the package-ladened drone from the warehouse to your doorstep. Batteries could run out if the distance is too far, and not only that, an abundance of drone traffic could become a flight-congestion nightmare.

The concept Mercedes Vision Van is a near-future riff on the omnipresent express delivery vans you see all day. Every day.

As currently envisioned, the Vision Van will have a human driver, but virtually everything else is different. For starters, a cloud-based dispatch system keeps all delivery vans networked and optimizes routes for individual vehicles in the fleet. Meanwhile, in the back, a modular mechanical shelving system loads and handles packages on deck to be delivered.

That's when the real fun begins. On the roof of each delivery van are two autonomous aerial drones locked into landing stations. When the van approaches the final leg of a delivery, the mechanized system feeds the package up and through the roof and into the belly of the drone.

The drone then takes off and delivers the package to its final location. In the case of business deliveries in urban environments, the drone could fly up to a designated landing point on the office building roof.

Or it could go the other way: A drone is dispatched from a delivery center, then flies to the van and deposits the package down through the roof. Beacons mounted in the van's roof guide the drone in for a precise landing, even if the van is in motion. The driver then goes to the final location - your home, say - and hands off the package the old-school way.

Matternet's current delivery drone model, the M2, can load and drop off packages up to 4.4 pounds with no human interaction required. Flight range is up to 12 miles on a single battery charge, and the drone can swap in fresh batteries on its own from the van's docking platform.

According to the designers, the M2 drone has full collision-avoidance and fail-safe systems onboard, including a kill switch and parachute for worst-case scenarios. The plan is to have a fully functioning drone delivery system that can work in both rural and urban areas. Eventually, the Vision Van won't need a driver, either, as automated vehicle tech ramps up.

It's all pretty space age, and you'll want to check out the demo video below to get a full sense of Mercedes' " Vans and Drones" sci-fi mission. The company hasn't established any definite time line for the system - it's safe to assume that the word "years" is involved - and competing drone systems are in development. But it's fun to see at least one company's vision projected out in detail like this. 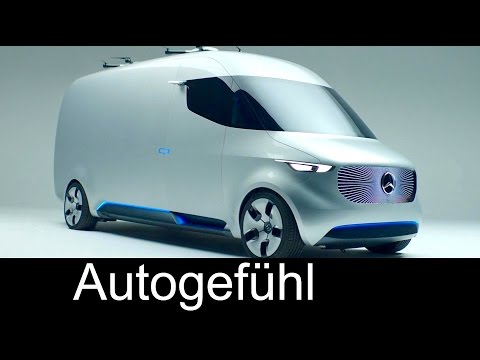