Snip, snip, snip and out popped a bamboo shark.

Giving birth to a shark isn't easy, especially if you are only equipped with a pair of scissors and instructions to snip the end of a large blob-shaped egg after it reaches a certain size.

The suspenseful effort, captured on video, shows a surprising way that bamboo sharks can enter the world. 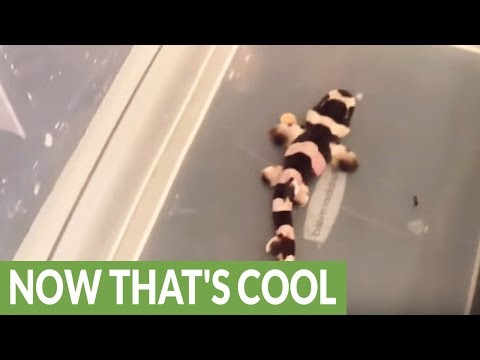 Beachgoers in countries where bamboo sharks live, such as Japan and Australia, sometimes find the egg cases washed up on the sand. The cases, colloquially known as a mermaid's or devil's purse, are lightweight and made of collagen protein strands. Usually the cases are empty, which is a good sign because that usually means that the young shark previously hatched out.

As the video shows, the juvenile shark -- if healthy -- comes out of the egg case fully formed and ready to rumble.

Along with wobbegong and epaulette sharks, bamboo sharks are the most popular sharks kept as pets. They require special care, however, such as large saltwater tanks and careful feeding. Since their wild habitat is a coral reef environment primarily in the Indo-West Pacific Ocean, they generally prefer a diet of shrimp, fish and squid.

The bamboo shark family includes seven different species, such as the spotted, brownbanded and whitespotted bamboo sharks. They can sport sturdy fins that the sharks use to walk on substrates, be they the ocean floor or an aquarium tank.

Since the sharks are nocturnal, their strolls and swims frequently happen at night.

RELATED: Sharks, Humans Living So Close, Why Not More Attacks?

A major challenge raising such sharks is finding tank mates that will not fight with the shark, or that the shark won't eat. They seem to get along with harlequin tusk fish, imperative angelfish, and blue girdled angelfish.

Bamboo sharks clearly have many claims to pet fame, but it's hard to beat their dramatic births. Even without the scissor suspense, they can give owners, including public aquarium staff, a shock. For example, Kico Iraolas of SeaLife Park in Weymouth, Dorset, U.K., had no idea what he was in for when he was performing a routine examination of a bamboo shark egg case.

Suddenly the egg burst open right in Iraolas' hand, and out popped a very gregarious shark.

RELATED: Sharks With Friends: The Most Social Sharks

Iraolas told the Daily Mail that he "was very surprised and wasn't expecting it at all...I called my colleagues who came over and we put the shark in a separate tank with lots of algae because when they are young they like to hide."

Adult bamboo sharks measure about 3 feet long, so hiding becomes trickier at that point, helping to explain why their multicolored bodies evolved to blend in with their natural reef habitats.