A Dutch man ends up with an adorable pet after having a bit of fun with his groceries.

A Dutch man decided, apparently just for fun, to incubate a pack of supermarket quail eggs just to see what would happen. And surprisingly enough, one of those eggs hatched.

Alwyn Wils, a 45-year-old Dutch man, has been making news since he published a video of his project. After buying a 12-pack of supermarket quail eggs, he plopped them all in an incubator out of curiosity. One of those eggs hatched into a healthy baby quail, which he has named Albert. Check out the video below: 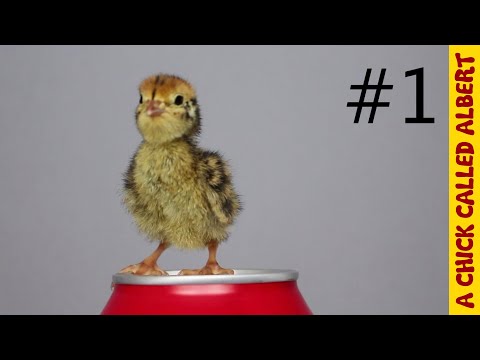 We don't have any way of verifying that this is all real, but the phenomenon of hatching supermarket eggs isn't impossible. Typically, eggs (quail, chicken, whatever) are unfertilized; hens will lay eggs most days without the need for a rooster. Even cage-free eggs are usually unfertilized, because there's really no reason for an egg-laying facility to have a rooster around.

But fertile eggs, those that may or may not have resulted from the mating of a hen and a rooster, are available. Often eggs obtained from a farmers market have the potential to be fertile, and some retailers, including Trader Joe's, will specifically sell fertile eggs. (The reason for advertising fertile eggs is that some assume fertile eggs to be more healthful than infertile; there's no evidence that this is true, and in fact unless you incubate a fertile egg, the differences between a fertile and infertile egg are extremely small.)

But fertile eggs can, if treated properly, hatch. Users of the forums on BackyardChickens.com have extensive threads about incubating and hatching fertile Trader Joe's eggs; the chickens hatch normally. (Many of these chickens are named TJ.) So it's certainly possible to buy an egg at the store and hatch it into a chicken. It just isn't all that likely, which is why Wils's baby quail is so fun.

Eggs come in a multitude of colors and patterns, from subtle pastels to vivid bright hues. Now a new study, published in Current Biology, supports a centuries-old theory that shell variation, at least for some birds, helps to camouflage eggs.

The masters of egg disguise turn out to be Japanese quail. This photo amazingly features eggs just from this one species. Mother quails somehow learn the patterning of their own eggs and choose laying spots to hide them best.

“We currently do not know the mechanisms by which the (mother) bird learns its own egg patterns,” lead author P. George Lovell of Abertay University and the University of St. Andrews, told Discovery News.

Nevertheless, the ground-nesting birds often perfectly match the eggs to substrate, helping to prevent the precious contents from being some hungry predator’s dinner.

Close-ups of the individual Japanese quail eggs really show how well the bird moms can match their eggs to the environment.

One of the first scientists to theorize that coloration and speckles evolved for camouflage against predators was Alfred Russel Wallace, who gained fame as Charles Darwin’s co-discoverer of the principle of natural selection.

Yet another Japanese quail egg matches its environment, but the egg is not invisible to us. “Some have asked why they can still see the eggs if they are camouflaged,” Lovell said. “It’s important to remember that the eggs are less visible, not invisible…The photographs are taken quite close up to the egg, and a predator wouldn’t necessarily be that close. It would be scanning an area, rather than staring straight at the egg.”

Japanese quail themselves are brown and speckled, like their eggs. The bodies of many birds appear to match their eggs. A parent bird could then likely better shield the egg when resting upon it.

Speckles appear to be key to camouflage, at least for eggs.

Avian expert Innes Cuthill of the University of Bristol’s School of Biological Sciences, told Discovery News, “Alfred Russel Wallace concluded that the brown and speckled colors of many eggs had evolved as camouflage against nest predators and that the ancestral color of white only persisted in species whose eggs were laid in well-protected cavities, were covered by nest material or, in birds such as ostriches, could be defended by their parents.”

Brown with speckles is just one egg color/pattern combo, as these reed warbler eggs reveal. Their greenish hue, set off by the green leaves surrounding the nest, would make them less visible to predators scanning the area from a distance.

This nest also includes a, slightly larger, common cuckoo egg. Demonstrating another bit of bird trickery, common cuckoo mothers frequently match the appearance of their eggs to those of reed warblers, which wind up caring for the hatchlings.

Sometimes avian parents enjoy the best of both worlds: camouflage for their eggs as well as fooling other birds. Cuckoo finches can be deadbeat parents, matching their eggs (seen in the inner circle) to those of the tawny-flanked prinia (outer circle).  The prinia parents are sometimes fooled into caring for the cuckoo finch eggs and later hatchlings.

Lovell and his team speculate that the dark and light markings serve as a disruptive camouflage, breaking up the outline of the otherwise revealing oval shape. That shape, for humans and countless other predators, serves as a visual signal for good eats.

This cockatiel, with its proud expression, has a right to boast. Its egg not only matches the mother bird’s coloration, but it also matches the environment. In the wild, a hunter would have a hard time finding such an egg.

By itself, the egg of a swan is just as visible as a bright white egg on a breakfast plate. Under the mother swan, however, the egg disappears.

An even more compelling mystery concerns a common sight in springtime—bright blue eggs in a robin’s nest. To human eyes, they are beautifully unmistakable. They stand out from both the nest and the parent birds, so why are they bright blue?

No one yet knows for sure. Biologists do know that pigment glands in the mother bird’s body deposit the blue coloration onto the eggs, so it must have a critical function. Perhaps the dark color camouflages the eggs when the eggs are at the bottom of a dark nest, or the blue might blend in with the sky for some viewers. Some researchers have even speculated that the striking color helps mother birds to find their own eggs.

For now, however, the case of the mysteriously blue robin’s egg has yet to be cracked.