Big, fat and youthful are sexy attributes for many female spiders.

Some male spiders prefer mating with young, fat females, according to new research on a species where males often have sex just once in their lives.

Female colonial orb-weaving spiders, Cyrtophora citricola, eat more than 80 percent of their partners after mating, according to the study published in the journal PLOS ONE.

"Males need to make their one shot at paternity count," said lead author Eric Yip, from Ben-Gurion University of the Negev, in a press release.

"In a colony males are likely to encounter multiple receptive females," he said, "and we found that males prefer to court and mate with younger, fatter, and therefore potentially more fecund females."

Yip and his team collected the spiders from six locations throughout Israel. Females were housed in cushy terrariums while males and juveniles were kept in separate enclosures. They all ate fly or grasshopper nymphs twice a week.

The researchers next paired the captured virgin male and female spiders randomly in the laboratory and observed which sex was more selective and which mates were chosen.

Throughout the animal kingdom, females usually are the choosier sex. That scenario holds true for many animals, including humans, but the tables are turned for the colonial orb-weaving spider. 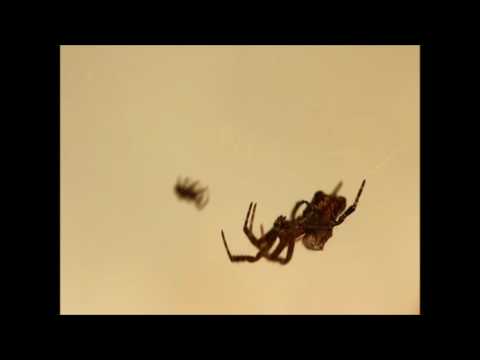 Males were far choosier than females, and were twice as likely to mate with well-fed, hefty females. "Males courted more often when the male was older and the female was younger," the researchers wrote, "and males copulated more often with well-fed females."

Impressive girth is a marker of a female spider's good health and fertility, the researchers suspect.

"Males are choosier than females for the traits we measured," wrote Yip and his colleagues, leading them to conclude "that group living and sexual cannibalism may together promote the evolution of male mate choice."

WATCH VIDEO: Is Spider Silk The Next Bulletproof Material?