Male gorillas seem to have their own version of mmmm and yummy, when eating.

The happy-sounding gorilla singing and humming, described in the latest issue of the journal PLOS ONE, could communicate to others that the diner is content.

The sounds are referred to as singing and humming "emphasizing the pure-tone acoustical elements that may resemble melodic bird songs and music," according to authors Eva Maria Luef of the Max Planck Institute for Ornithology and her colleagues Thomas Breuer and Simone Pika.

Koko the Gorilla Still a Wonder at 44: Photos

Turn up the volume in the below and listen to the sounds, which seem to be comparable to "mmmm" and "yummy" in human speak: 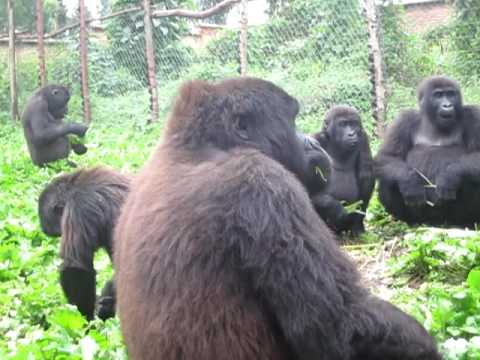 To better understand the sounds, Luef and her colleagues tracked two wild western lowland gorilla populations in the Republic of Congo. The scientists recorded and analyzed the singing and humming calls that gorillas of different ages and sexes produce in response to various foods.

They found that adult males make the sounds much more frequently than females. The type of food mattered as well.

According to the authors, "Aquatic vegetation, flowers, and seeds led to a high likelihood of call production. Insects, in particular, showed the lowest probability and rate of calling."

Video: Just How Smart is Koko the Gorilla?

As for why males sing and hum more while eating, the researchers note that males in general tend to vocalize more frequently. They point out that "females and immatures are generally at a higher risk of predation and thus behave more quietly."

Other factors could be at work too. The calls are too quiet to be "food advertisement signals," which are essentially dinner bells in the world of wild great apes. The singing and humming might, however, "represent a form of collective decision-making in the feeding context and allow group members to coordinate their feeding activities," according to the authors.

This could also help to explain why people often share with each other how they feel about food in melodic ways. This usually happens right at the table, too. Few say a rapturous "mmmm" about food out of the direct context of actually eating.

Singing Animals Get in Tune: Photos

Just as humans also sing and hum to themselves when content, gorillas appear to do this as well. Such reports are mostly anecdotal, so more research is needed to determine the full communication abilities of gorillas, their meaning, and how they connect to the evolution of vocalizations among all higher primates.

A male gorilla from the Congo is shown enjoying a snack.

This week the Internet was treated to

of a heartwarming meeting between the world's most well-known gorilla and a decidedly less famous, but no less cute, box of kittens. The gorilla starring in the footage was none other than Koko, a primate who has lived under human care since birth and who is said to be able to "speak" using some 1,000 hand signs based around American Sign Language. She even understands around 2,000 spoken English words, having worked since 1972, at age 1, with her longtime trainer Francine "Penny" Patterson. The kittens visiting in the just-released video were a birthday present for Koko (though her actual, retail-value birthday is July 4). Now 44, her development continues to astonish her human friends.

It wasn't the first time Koko has ever held kittens, however. Here she gently holds one during a visit from a passel of tiny felines in 2012.

Koko loves playing and acting with a variety of dolls -- be they human, ape, alligator, or orangutan, like the one she's kissing in this photo.

Even a colorful dinosaur pinata will make Koko happy.

So will a cute, big-eyed doll.

Gorillas Can Use Their B.O. To Say "Back Off!"

Here's a neat glimpse of Koko practicing a bit of tradecraft. Gorillas recognize themselves in mirrors, but here Koko is less interested in her own grooming than she is in "spying" on the photographer behind her.

Her handlers say Koko, who's had some dental surgery in the past, likes to check out people's teeth. In this photo, she is asking to see someone's teeth. The Foundation says Koko will sometimes refer to a person as "fake tooth" if she spots interesting dental work.

10 Animals That Can Speak For Themselves

Because of her own well deserved celebrity, Koko is not unaccustomed to meeting famous humans. Here she bonds with actress Betty White.

Video: Do Animals Have A Sense Of Humor?

Of course, among Koko's most famous encounters was her meeting with legendary comedian Robin Williams. The two made fast friends. Foundation staff say the comic made Koko smile for the first time in six months, helping her get over the death of a gorilla companion half a year earlier. It seems the smiles went both ways.

In this pensive photo from August of 2014, Koko has just learned of Williams's death. She was told "we have lost a dear friend, Robin Williams," which produced this look on Koko's face.

Toward the end of the day on which Koko learned of Williams's death, she sat in a very somber state, head lowered, lips reportedly quavering.

Koko soldiered on, though. It's a good thing, too! Who knows what more she can teach us about interspecies communication. She certainly seems eager to help. But, first, a nap!