Legal Weed in California Could Help the Environment

In 1849, prospectors came to Northern California for gold. In 2016, they're coming for green. Recreational marijuana isn't yet legal in California, but the prospect has sparked a land grab in the area known as the Emerald Triangle.

If Prop 64 passes on Nov. 8, California will become the largest legal marijuana market in the country. This has prompted investors and entrepreneurs to bulk buy rural land in Northern California where the growing conditions are ideal and names like Humboldt have large-scale brand recognition within the industry.

Many residents in Humboldt and Mendocino counties aren't strangers to pot farming. The legalization of medical marijuana in California has enabled farms there to flourish and much of the illegal crop comes from these areas. But the prospect of a fully legal marijuana market (for adults over 21 years old) raises questions.

In a state plagued by drought, what will the environmental impact be from new marijuana farms, both outdoor and indoor, springing up in the same area all at once? Are marijuana entrepreneurs using sustainable resources in their grow operations, or will they just expand the carbon footprint?

RELATED: Where Did Marijuana Come From and How Did It Spread? 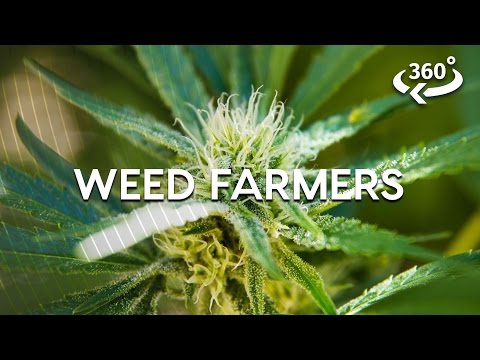 Illegal growers often use pesticides and fertilizer, Anderson said. Manufacturing and transporting them increases a crop's carbon footprint. "A lot of the [research] sites I've worked on in the past, we have a lot of problems with illegal pot farming that is almost all done by cartels. I've had research sites on the San Francisco Peninsula recover 50 pound bags of fertilizer in a very sensitive habitat," Anderson said.

"Just like we have the organic food section and the more traditional agriculture, I think we'll see that," he said. "If you look at the Colorado example, the bulk of what's gonna go on is larger-scale stuff and so some of those people will be inclined towards renewables, others won't," he explained.

Water conservation has been a major priority for California, as the state sees its sixth year of drought. According to Anderson, a legal marijuana industry shouldn't raise much concern in terms of water usage.

"I haven't done a side by side comparison but if we're talking about almonds or some of our other really water intensive crops, pot is way way lower than those," he said. "Because so many people had to do this clandestine, it really seems to have driven this hydroponic efficiency."

Anderson thinks that the ability to market marijuana as "sustainable" will also help create an incentive for growers. "One of the things we study is seafood labeling, ecolabels, and that's a clear economic signal to induce people to more sustainable practices," he said. "You can charge a premium, so I guarantee that'll be ... marketed as, you know, 'zero carbon pot,'" he said.

The passing of Prop 64 may also reduce the impact of transporting pot. Hundreds of boats come to California's shores each year carrying illegal marijuana.

RELATED: Alcohol vs. Weed: Which Makes You More Creative?

"These guys run on in, they're spilling gas, there's local environmental impact, and you know a boat or two - who the hell cares?" Anderson said. "But it's hundreds and hundreds of these vessels a year, in many cases in sensitive habitats," Anderson said.

Concerns about marijuana decriminalization in California go beyond the environmental impacts as well. The medical marijuana community has been deeply divided on the issue - some growers think they're at risk for being shut down, but others insist that Prop 64 will protect small farmers and has their best interests in mind.

Economics aside, Anderson says legalization should be a net positive for the environment. "It seems pretty clear to me that we're going to see a massive reduction in the footprint, assuming this [Prop 64] is approved," he said. "So given the economy to scale, the 'per bud footprint' is gonna be going down I think."