The engineers over at Boston Dynamics have a rich history of releasing fantastic viral videos of the super-advanced bipedal and quadrupedal robots they're developing in their Massachusetts lab. These uploads tend to storm the internet for a day or so, flip everyone out, then generate a wave of response videos and memes. It's a nice little digital ecosystem.

The latest video of one of their robots didn't come from their press office, though. It was filmed during a private investor presentation and uploaded to YouTube by venture capitalist Steve Jurvetson, who attended the event. It might be the most eye-popping footage yet.

The new bot, named Handle, actually uses a combination of wheels and legs to perform some pretty impressive moves. Two-wheeled and vaguely humanoid, it's startlingly fast and has the ability to jump over obstacles while maintaining momentum. The robot is really quite graceful. As it glides over surfaces in both indoor and outdoor scenes, it evokes the movement of a figure skater.

More than likely, however, the wheeled robot will be assigned a life of manual labor. As both the video and the name suggest, the robot appears to be designed for moving around boxes and payloads in an automated warehouse setting. 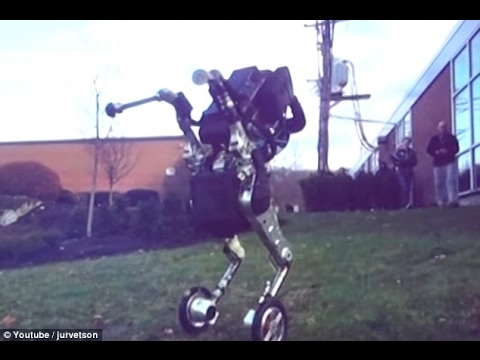 It's clear from the video that Boston Dynamics founder Marc Raibert had an attentive audience at the presentation.

"Everybody thinks we only do legged robots, so no one has seen this," Raibert said. "This is the debut presentation of what I think will be a nightmare-inducing robot."

RELATED: Meet the Most Incredible Robots of 2016

Raibert went on to describe some of the thinking behind the new bot.

"This is an experiment in combining wheels with legs, with a very dynamic system that's balancing itself all the time," Raibert said. "It has a lot of knowledge about how to throw its weight around, which it uses to stabilize itself. This is much more efficient than a legged robot. It can carry a reasonably heavy load on a small footprint. It's basically an exercise to see if we can do something ... less expensive but still with significant capability."

While Boston Dynamics undoubtedly makes some of the planet's coolest robots, the company has struggled to come up with a viable commercial product. The company was purchased by Google's parent company Alphabet in 2013. If the Handle bot can find some warehouse work, maybe it has a future in industrial films.