Lava meet ocean: Ocean, this is lava. It's land being formed before your eyes: What's not to like?

The U.S. Geological survey reported this week that 2,000-degree lava from the Kilauea volcano made its way across part of the big island of Hawaii's Volcanoes Park, and met the ocean for the first time since 2013.

The lava exited the volcano at a vent called Puu Oo and crossed an emergency road before meeting the coast.

The mix of lava and sea, says the USGS, creates an acidic plume mixed with fine volcanic particles that could harm tourists hiking nearby to take a look. Boat tours are also making trips to the site to view the lavaflow entering the ocean. 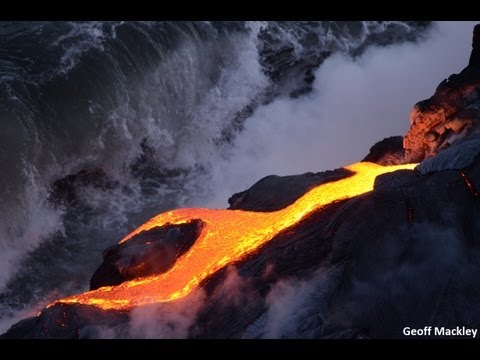 When hot lava reaches the ocean, besides boiling and vaporing the cool seawater, it creates new land at the ocean edge, called a bench, which appears firm but can easily collapse, warns the USGS.

Kilauea is one of the most active volcanoes in the world, and has been continuously erupting since 1983.