Hundreds of kitesurfers hit the beach in South Africa to smash their previous world record.

Kites rising above the waves like colorful seagulls, hundreds of kitesurfers recently gathered in Cape Town, South Africa, to smash their group's own world record.

A total of 415 pro and amateur kitesurfers came together over the weekend for the Virgin Kitesurfing Armada. This annual event, supported by entrepreneur Richard Branson, first began in 2013 as a unique way to fundraise for charity.

The feat in South Africa required more than a year of planning to achieve, according to the organizers. Kitesurfers already consider the beach in front of Table Mountain to be one of the world's best destinations for their sport. The one-mile course began at Dolphin Beach and finished at Doodles.

Kitesurfers were raising money for the local Save Foundation, Virgin Unite, and the youth charity Snow-Camp.

Two years ago the Virgin Kitesurfing Armada set an official Guinness World Record for "largest parade of kitesurfers" by convening 352 participants in Spain.

Although the new record hasn't been posted officially yet online, I expect it will be soon, joining other mass participation records like the largest gathering of Elvis impersonators, largest underwater human pyramid, and longest unicycle chain.

RELATED: Kitesurfer Lost at Sea Fights Off Sharks with a Knife

Reading about the kitesurfers is one thing, but actually seeing so many in action is another. Check out this mesmerizing video: 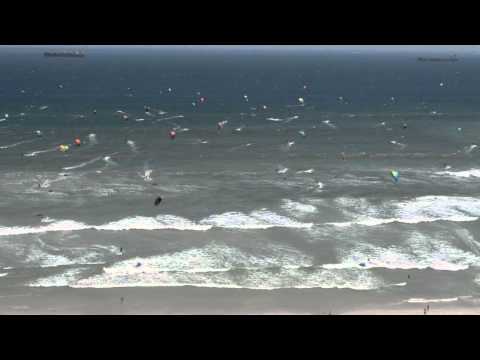 The wind really was in their favor - you can hear it. What's amazing to me is how calm the kitesurfers appear despite what seems like a high probability of entanglement. Now all they have to do is get more people to keep their kites up next year.