Courtship begins with the female crawling forward and sitting on the male's head.

A new mating position for frogs has just been discovered, adding to the six positions already documented for the approximately 6,583 species of frogs and toads found worldwide.

The new frog mating position, called the "dorsal straddle," is unique in that males don't penetrate females, who technically remain virgins even after the act. The discovery, reported in the journal PeerJ, is just the latest unusual finding concerning Bombay night frogs -- Nyctibatrachus humayuni -- which are some of the most distinctive-behaving amphibians in the animal kingdom.

"Bombay night frogs belong to an ancient group of frogs that evolved about 70-80 million years ago," project leader SD Biju from the University of Delhi told Discovery News. "This may be the reason why unique ways of mating evolved in this group. Night frogs exhibit an amazing diversity both in terms of number of species and reproductive modes."

Biju and his colleagues spent a total of 40 nights in the field studying a population of the frogs located in a dense forest near Humbarli Village in the Satara District of Maharashtra, a state spanning west-central India. Male Bombay night frogs were not hard to find, as they often vocalized loudly, making their presence known.

The researchers took both photos and videos of the frogs, using infrared light and silent discretion whenever possible to avoid disturbing the amphibians. 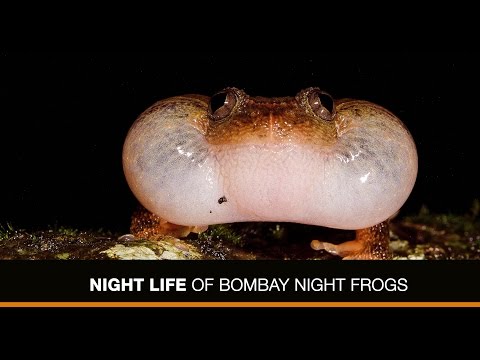 Based on the observations, life is not easy for the frogs. Males frequently must battle over long periods for coveted females. When they do win their mate of choice, one or both frogs sometimes fall into water while they are trying to mate, abruptly interrupting the moment. Such activities usually happen at night on overhanging vegetation.

According to the new study, males begin the mating process by calling from the ground. Once the female of choice is located, the male may travel up to 20 feet into the vegetation. Courtship at that point begins with the female crawling forward and sitting on the male's head.

The male then straddles over her back with his limbs holding or resting on substrates such as a leaf, branch or tree trunk. At that point, he releases sperm onto her back and then moves away. Shortly thereafter, the female lays several eggs. The sperm on her back trickles down, fertilizing the eggs.

This "dorsal straddle" move was not the only discovery made during the research. The scientists determined, and verified with recordings, that females of this species produce calls. The findings add Bombay night frogs to the 25 other species of frogs known to have vocalizing females. Biju said less than .5% of female frogs do this, making the behavior very rare.

"Even in our study," he added, "female calling was observed only briefly and on just four occasions over a total of 40 nights in the field, compared to the almost permanent presence of male advertisement calls."

He suspects that the frogs might have trouble finding each other, given the nighttime mating, slip ups of falling into water, dense vegetation and other challenges that this determined species must face.

WATCH: Which Animals Have Sex For Fun?

The frogs' difficulties do not end after the mating efforts either. Biju and his team watched as snakes would sometimes eat all of a frog couple's eggs in one giant gulp. The discovery marks the first documented observation of snakes eating frog eggs in India.

Bruce Waldman is an amphibian expert at Seoul National University. He told Discovery News, "This study demonstrates that males can father offspring by depositing sperm on their partner's back, which then drip onto her eggs as she lays them. Such mating tactics should be effective, yet possibly less risky than typical clasping behaviors, especially for frogs that breed on vegetation above water."

Waldman continued, "The research highlights the incredible diversity of reproductive patterns shown by amphibians. In the midst of ongoing worldwide population declines of amphibians, we have so much more to learn about their basic biology so that we can understand their evolutionary history and, importantly, ensure their future survival."

Credit for all Photos: SD Biju

A male and female Bombay night frog mate via the newly discovered move: the dorsal straddle.

After mating, the female -- still technically a virgin -- lays eggs, which are fertilized as sperm trickles down her back.

A male Bombay night frog calls next to eggs that a female has just laid.