A New Zealander spends some quality time in the water amid a pod of killer whales, and a drone overhead catches the encounter.

New Zealand kayaker Timothy Stewart found himself looking down into the water and coming face-to-orca with a curious killer whale and the rest of its pod. Then he did something not every kayaker would do: He abandoned ship and joined the 13-foot (4 meter) marine mammal for a swim. Or, as stuff.co.nz reported, he joined it for a dance.

"My natural spontaneous reaction to feel at one with them pulled me into the water, and gazing into the open mouth of my dance partner showing her teeth was surreal," Stewart told the site.

As the luck of the modern age would have it, Sam Kynman-Cole, of TopVIEW Photography, was piloting a drone overhead and recorded the entire encounter.

The special swim took place in Army Bay, off Auckland. In the video, Stewart can be seen hopping into the water and taking a swim with the orca, which remained incredibly close to its new human friend, its mouth frequently open.

The orca follows Stewart when the kayaker decides to return to his vessel, the giant cetacean looking for all the world as though it's nipping at the man's heels.

"I headed back to the kayak slowly not realizing she was following on my heels," Stewart told Stuff. 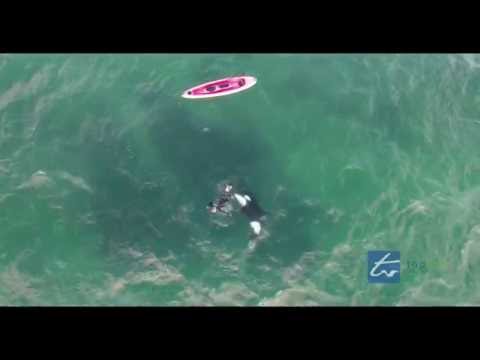 "I'm so thrilled to have been able to see and film orcas this evening in Army Bay," Kynman-Cole wrote on the TopVIEW Photography Facebook page.

"Overall I was in the air filming for about 9 minutes," he added, on the company website. "It was a truly memorable experience and I feel very lucky to have been able to capture it."

RELATED: Killer Whales, Humans Have Much in Common

Orcas hunt in pods in the wild and are apex predators that take in all kinds of prey, such as sharks, birds, turtles and seals. They also hunt marine mammals such as dolphins and whales.

In the wild they do not have a record of killing humans, although they have killed people in captivity.

Stewart seems to have felt at ease, although he decided to keep clear of the other orcas that can be seen in the latter part of the footage, instead letting his new friend see he would not bother the others.

"I paddled to him first and let him swim around and beside me as he did, showing me he had no concerns."

style="text-align: left;">The world's oldest orca, affectionately known as "Granny" and an estimated 103 years old, paid a visit to the waters off Washington state on May 9 alongside her 25-member pod, "J-Pod." The sighting was a treat for the tour guests of Captain Simon Pidcock's Ocean EcoVentures. Pidcock took the chance to capture Granny in this series of photos.

style="text-align: left;">The grand dame and J-Pod for the majority of the year patrol the waters between the north coast of British Columbia and Northern California.

style="text-align: left;">Pidcock said Granny was instantly recognizable by her saddle patch, a white area whales have on their dorsal fins.

style="text-align: left;">J-Pod was reportedly seen about one week earlier in an area off Northern California -- some 800 miles away from this appearance. This leaves whale watchers feeling confident about the shape Granny is in, if she can make such amazing journeys.

style="text-align: left;">Granny's birth year designation of 1911 derives from her size, the size of her offspring, and comparison photos of the senior-citizen orca from as far back as the 1930s. She was caught once in 1967, but she was released because her age was a bit long in the tooth for sea park life. Who could have imagined that 47 years later she would still be alive and thriving?

style="text-align: left;">Granny's 103 years are about twice the age of the oldest orca in captivity (Lolita, in the Miami Seaquarium, is 50). "It surprises people when they realize this whale was around before the Titanic sank. She's lived through fishing changes and live captures of whales. I would love to know what she thinks," said Pidcock. Photos courtesy of Simon Pidcock and