Just Toss This Ball to Extinguish a Fire

An odd-but-effective Thai invention could save your life. Continue reading →

Back in 1997, a fire destroyed a 17-story hotel at the beach resort town of Pattaya, Thailand. At least 78 people were killed and more than 50 injured.

That disaster so horrified a Thai inventor named Phanawatnan Kaimart that he decided to do something about making such fires easier to put out. The following year, Kaimart invented the Elide Fire Ball, a device that enables an ordinary person without fire protective gear or training to put out a fire, without having to fumble around with a conventional fire extinguisher.

Instead, all a person has to do is take one of the 3.5 pound balls, which are intended to be hung on walls in strategic places, and then throw it into the blaze. 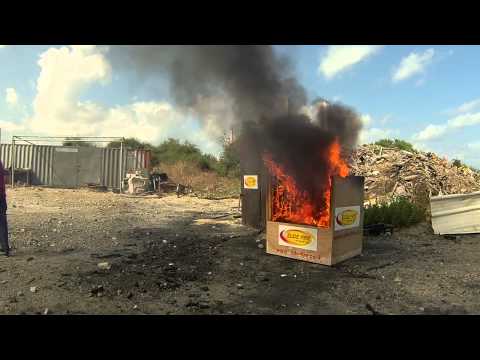 The ball then releases a cloud of chemicals designed to put out the fire before it can spread.

The ball also acts as an alarm, making a loud warning sound, and then automatically dispersing chemicals.

According to the manufacturer's website, the system is designed to allow a person to stay at least 6 feet away from the fire while putting it out. If the fire has been raging for more than eight minutes, though, the fire department may be necessary to extinguish it.

The company says that the chemicals in the ball are non-toxic and won't harm the environment.

The Elide Fire Ball can extinguish a fire if a person throws it from a distance.

Nearly 30,000 firefighters and support staff were battling blazes across a handful of mainly western U.S. states, after millions of acres and multiple buildings have burned. A total of 7.16 million acres have gone up in flames across the country this year, the National Interagency Fire Center said. That's the earliest the 7 million mark has been reached in the past 20 years, it said, adding that a large portion of this was from Alaskan wildfires several months ago.

Above, the Jerusalem Fire burns at the Lake and Napa County lines after jumping north of the highway Tuesday afternoon.

Canada has offered 100 firefighters plus other personnel and 20 "smokejumpers" who parachute in to fight the blazes. The center was also in discussion with Australia to provide assistance, she said. On Tuesday, authorities announced that the U.S. military would be sending troops.

'Unprecedented' Drought Looms for Western US

A heatwave exacerbating four years of drought is also making California vulnerable. A total of 41,194 fires were burning across the United States, Boehle said, adding that as of Tuesday, 1,074 structures had been scorched.

See How Drought Is Changing California

In California, dry lightning strikes sparked most of the fires, while the causes of others remained unknown. But authorities said they did not suspect foul play. Thousands of lightning bolts since caused hundreds of smaller fires throughout the state, but most of the blazes were concentrated in the north, California fire chiefs said.

Civilizations That Withered in Drought

Idaho's Soda Fire, which has been one of the largest blazes, was 90 percent contained Wednesday after burning through 283,686 acres.

Meanwhile since Friday, more than 1,000 firefighters have struggled with a blaze started by lightning in the Chelan, Wash., area, where at least 49 buildings have been destroyed and authorities have issued evacuations that affect some 3,000 people, the Seattle Times reported.

The 10 states affected by large fires are Oregon, Washington, Idaho, Montana, California, Nevada, North Carolina, Louisiana, Texas and Arizona, Boehle said. The northwest quadrant -- Washington and Oregon -- is the center's "highest priority," she said. "The last couple of years have been unusual in the Northwest with reduced precipitation. We've been seeing more fires in the Northwest than usual."

California Drought by the Numbers