Is 'Planet 9' a Kidnapped Ex-Exoplanet?

The mysterious origin of the hypothetical planet that may be lurking in the outermost regions of the solar system just got weirder.

Astronomers are working hard to track down any visible signs of a large undiscovered planet pottering around in a distant corner of the solar system. We have a pretty good idea that it exists -- its gravity seems to be tugging on a few Kuiper belt objects (KBOs) -- but there has yet to be any direct visual clue that it's really out there.

The fact that it hasn't been picked up by infrared or optical surveys is actually a fairly good indicator as to how far away and how big this thing is; by ruling out where we know it isn't, we can put limits on the planet's physical size and take a stab at its composition. Granted, this isn't the first time astronomers have found clues to a massive object lurking in the outer solar system, but this time the evidence is pretty compelling.

NEWS: 9th Planet May Lurk in the Outer Solar System

Astronomers have already done some work in guessing what Planet 9 might be made of, but on Tuesday (May 31) researchers threw a wildcard into the mix: What if Planet 9 isn't from 'round these parts? Could it be an alien world, kidnapped by our sun from its home star billions of years ago? In other words, is Planet 9 an ex-exoplanet?

"It is almost ironic that while astronomers often find exoplanets hundreds of light years away in other solar systems, there's probably one hiding in our own backyard," said astronomer Alexander Mustill, of Lund University, Sweden, in a statement.

WATCH VIDEO: How We Detect Water On Exoplanets

By Mustill's reckoning, around 4.5 billion years ago, when our sun was a baby, solar gravity likely interfered with the orbit of a planet around a neighboring star. This idea isn't such a stretch; stars are often born in molecular clouds that form dense clusters of stars. As planets form around these stars, their orbits may become destabilized and flung into interstellar space or shared between stellar neighbors. The gravitational environment would have been a mess.

ANALYSIS: Could 'Planet X' Cause Comet Catastrophes on Earth?

As time went on, the young stars drifted apart and their planetary systems settled -- but these systems could easily contain planets that weren't formed around the star they currently call home. Did this happen to Planet 9? Computer simulations carried out by Mustill and his team certainly suggest it's a possibility.

"Planet 9 may very well have been 'shoved' by other planets, and when it ended up in an orbit that was too wide around its own star, our sun may have taken the opportunity to steal and capture Planet 9 from its original star. When the sun later departed from the stellar cluster in which it was born, Planet 9 was stuck in an orbit around the sun," said Mustill.

Calculations of Planet 9's mass puts it at around 10 Earth masses -- so it could be a really big rocky world or a small Neptune-like ice giant. For now, it's composition is speculative at best. However, if this mysterious world wasn't born from our sun's protoplanetary disk, and is in fact a planet from another star, it may be a very alien world indeed. How would its composition differ from the other planets in the solar system?

ANALYSIS: The Hunt for Planet 9: What's It Made Of?

As noted by the researchers, it would be ironic if we do find Planet 9 to be from another star system -- it would be the closest (ex-)exoplanet to Earth and possible exploration destination for our spacecraft. The enthusiasm was high for sending NASA's New Horizons mission to Pluto, imagine the excitement surrounding the possibility of sending a robotic probe to Planet 9 if it was found to be a late addition to our solar system's planetary family? 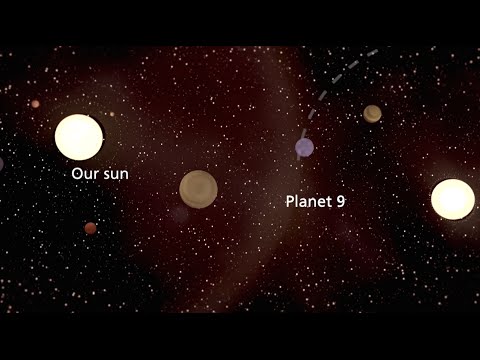