After a year of speculation since NASA's Dawn mission arrived in orbit around dwarf planet Ceres, we may be coming close to answer as to what is causing its mysterious bright spots inside the famous Occator Crater.

After a year of speculation since NASA's Dawn mission arrived in orbit around dwarf planet Ceres, we may be coming close to answer as to what is causing its mysterious bright spots inside the famous Occator Crater.

"Before Dawn began its intensive observations of Ceres last year, Occator Crater looked to be one large bright area," said Ralf Jaumann, planetary scientist and Dawn co-investigator at the German Aerospace Center (DLR) in Berlin. "Now, with the latest close views, we can see complex features that provide new mysteries to investigate."

Revealed at the 47th annual Lunar and Planetary Science Conference in The Woodlands, Texas on Tuesday, this enhanced color view (pictured top) inside the 57 mile-wide crater reveals a wonderfully detailed observation of a dome-like structure. The dome, nestled inside a smooth-walled pit, exhibits fractures and is surrounded by blotchy white clusters.

These are the highest-resolution pictures of this famous region captured so far as Dawn was carrying out low mapping orbits yet, coming within 240 miles from the small world's surface.

"The intricate geometry of the crater interior suggests geologic activity in the recent past, but we will need to complete detailed geologic mapping of the crater in order to test hypotheses for its formation," said Jaumann.

Further work is needed to fully understand what internal mechanisms are driving Occator's strange geology, but from these observations, the domed structure certainly appears to be volcanic in origin. However, if confirmed, this is a very different kind of volcano than what we are familiar with on Earth.

Long before Dawn entered Ceres orbit, it was known that Ceres, which lives in the asteroid belt between the orbits of Mars and Jupiter, has significant quantities of water in the upper layers of its surface. The bright spots inside Occator were also observed, leading to speculation that Ceres' geology is driven by cryovolcanoes. Assuming significant quantities of volatiles (ices) inside Ceres are gently heated by the dwarf planet's interior, these chemicals could be erupting through the surface layers. Over time, a dome may form, cracking and resurfacing the crust.

This finding ties in with other recent discoveries on Ceres. Primarily, there are less craters than would be expected for such an ancient body; perhaps ongoing icy processes like cryovolcanism is constantly resurfacing Ceres. Also, ground-based observations of the bright spots have shown daily variations. Even possible vapor has been spied by Dawn around the vicinity of Occator - a sign of sublimating ice.

In other findings summarized at Tuesday's meeting, planetary scientists said that Dawn's VIR instrument had detected water inside the young 6 mile-wide Oxo Crater in the northern hemisphere of Ceres. Also, the dwarf planet has a rich variety of mineral variations across its surface. VIR analysis on another crater called Haulani has revealed a very different material composition below the surface. "The diversity of materials implies either that there is a mixed layer underneath, or that the impact itself changed the properties of the materials," said VIR instrument lead scientist Maria Cristina de Sanctis, at the National Institute of Astrophysics, Rome.

Of course, Ceres wasn't the first asteroid belt body Dawn has visited. The spacecraft also spent 14 months from 2011-2012 in orbit around massive asteroid Vesta, allowing mission scientists to carry out direct comparisons between the two bodies. 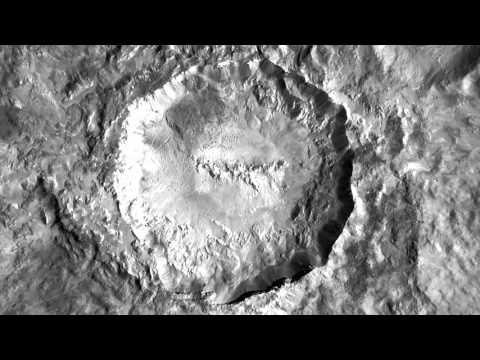 The bright spots of Occator Crater are shown in enhanced color in this view from NASA's Dawn spacecraft.

is going to get a real close look at the surface

. What the heck are those bright spots seen from afar? What sort of processes sculpt its airless surface? Scientists will get a better sense of this when the spacecraft moves from its previous orbit of 915 miles (1,470 kilometers) to just 235 miles (380 kilometers). Dawn began its maneuvers on Oct. 23 and will reach the lowest orbit of its mission by mid-December.

The spacecraft is expected to finish its work in mid-2016, and remain in orbit as a small satellite -- an artificial moon -- of Ceres. Meanwhile, in the thousands of pictures beamed back from the mission, scientists are starting to get a sense of what the surface really looks like.

This is actually a picture from February when Dawn was closing in on Ceres, but it gives you a sense of what the dwarf planet is shaped like. Unlike other members of the asteroid belt, Ceres is round -- that's what makes it a dwarf planet. You can also see some white spots on the surface that are still puzzling scientists after months of study.

ANALYSIS: NASA: We Need YOUR Help to Solve Ceres Mystery

While scientists were of course interested in what the pictures showed, back then the main purpose of these shots was for "optical navigation", according to the Dawn blog. "Just as when it reached its first deep-space target, the fascinating protoplanet Vesta, mission controllers have to discover the nature of the destination as they proceed,"

the blog said at the time

. "They bootstrap their way in, measuring many characteristics with increasing accuracy as they go, including its location, its mass and the direction of its rotation axis."

We can easily see that Ceres was

smacked by meteorites at different times

. In this picture, the crater to the left has much sharper edges than the prominent crater to the right, indicating that erosion -- probably erosion from other impacts -- has worn down the older craters.

A more careful look reveals that there are actually craters on TOP of craters as space rocks of various sizes, even down to the size of pebbles or dust, periodically crash into the surface of Ceres.

you can start to understand the geologic history

. The small craters you see inside occurred after the bigger crater was formed. The slumping walls show that erosion has started to occur. There's a bit of white on the surface, perhaps showing something exposed from below, and a small rille in the center.

This is one of the images scientists are using to get a better look at the white spots, which have been speculated to be water ice or indications of a mineral. "Occator is home to the brightest area on Ceres, which tends to appear overexposed in most images,"

about this recent composite image. "This view uses a composite of two images of Occator: one using a short exposure that captures the detail in the bright spots, and one where the background surface is captured at normal exposure."

As observers of Earth's moon know, when you start to look at an object in different lights, different features are visible. When the sun is directly overhead on the moon, the sunlight can wash-out some of the craters' sides. When it is at a steeper angle, the shadows start to show a little bit more detail. So by looking at different angles of Ceres (at different times of the day on Ceres' surface),

as this shadowy picture shows

, scientists can see a little more of its craters and its detail -- just by using simple geometry.