There must be something about pro cycling that brings out extreme cheating. For a while it was performance-enhancing drugs and secret blood transfusions. Now accusations of motors hidden inside bike frames are intensifying.

Moto-doping rumors were once dismissed as improbable, but new infrared imaging from French reporters is raising suspicions.

Journalists from the French sports news show "Stade 2″ recently launched their own investigation, Deadspin reported. Their nearly 20-minute segment starts with video clips from various races showing suspected motor-assists. They interview an Italian who makes powerful motors that fit inside bike frames. The tech gives tourists a boost on uphill terrain, but it's also pretty easy to detect. Other motor-assist mechanisms may be sneakier.

Jean-Pierre Verdy, former director of France's anti-doping agency, told the reporters that top cyclists on top teams had been accused of moto-doping in the past, but the agency lacked proof. So, armed with a straightforward thermal camera, the reporters go to several races in Italy that draw big-name cyclists.

They weren't out to identify specific cheaters, but to demonstrate that this simple approach could reveal hidden motor-assist mechanisms inside bikes. They discover several strange hotspots that could signal moto-doping. A thermal imaging expert agrees the spots are unusual, but he isn't absolutely sure they all indicate motors.

The reporters show the imaging to Brian Cookson, president of the Union Cycliste Internationale (UCI), the world governing body for sports cycling. Maybe it's just simple friction, he says, but his grimaces while watching the footage seem to say more. He agrees that it would be enough to warrant inspections.

You might be wondering why the bikes aren't scanned. They are, using a tablet computer and an app. In January, a magnetic resonance device picked up a suspicious pattern in cyclist Femke Van den Driessche's bike that later turned out to be a motor and battery. The problem is that materials used to make pro bikes could still hide sophisticated motor technology from new screening devices, the New York Times reported.

Bike To Work Week: How The Bicycle Got Comfortable: Photos

Hungarian engineer Stefano Varjas met the "Stade 2″ journalists in Budapest. He specializes in building crank-assist devices primarily for disabled riders. His Bluetooth-controlled technology is lightweight, compact, silent, and powerful - up to 250 watts. Some pros use it for training. However, he can't control who ends up using it and when, he says.

Watching the infrared footage, Varjas thinks that an unusual back wheel hotspot could be a motor. If your French is good, here's the in-depth report: 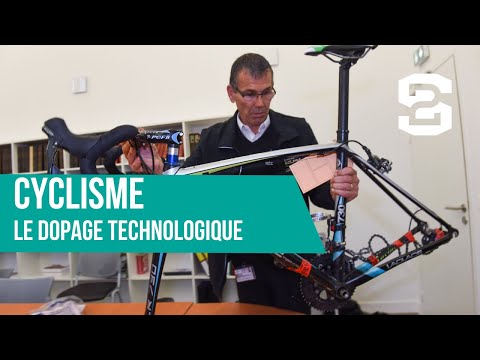 Watching the Tour de France last summer, I got swept up in the race, nearly spilling coffee in excitement a few times. The picturesque scenery, the fans crowding steep streets, the terrifying crashes, the racers' resilience - it was the first time I'd ever really followed all the stages, and I didn't want it to end.

Oh how badly I wanted all the racers to be clean. Surely the recent doping scandals had prompted sweeping changes. Now I'm more skeptical. Moto-doping sounds absolutely ridiculous. However, just because a form of cheating is laughable doesn't mean it's not happening.