Tour the inside of the world's critical storage bank for 2.25 billion seeds. 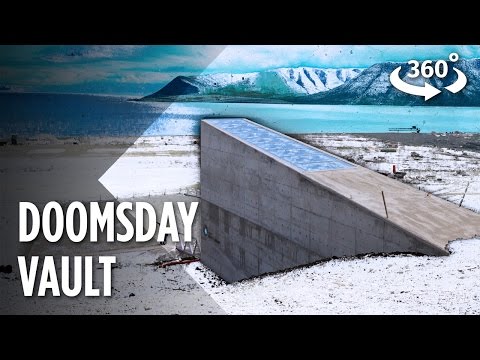 The Svalbard seed vault has been referred to as the "doomsday vault" for good reason. Housed in the Norwegian-sovereign islands since 2008, halfway between Norway and the North Pole, Svalbard can hold up to 2.25 billion seeds from 4.5 million crop varieties.

Basically, it's our insurance plan for the world's food supply.

The seed vault is set underground, 120 meters (394 feet) inside a mountain. The temperature is kept at a consistent -18 degrees Celsius (-0.4 Fahrenheit) to ensure the seeds will be preserved for thousands of years if necessary. Gene banks all over the world preserve genetic material from crops and then give some of the seeds to Svalbard in case their own reserves are destroyed during natural disaster or war.

Marie Haga is the executive director of the Global Crop Diversity Trust, the organization that manages Svalbard. She told Seeker that she's already seen gene banks destroyed in several countries.

Last year, Svalbard was put to the test when Aleppo, Syria needed to make an emergency withdrawal of seeds.

RELATED: A Rare Look Inside The Arctic Doomsday Seed Vault

The gene bank in Aleppo holds seeds for lentils, chickpeas and the world's most valuable barley collection. It also holds seeds for some of the oldest crops in the world, like ancient varieties of wheat and durum.

According to Wired, it wouldn't even take something a dramatic as a bombing for the seeds to be at risk. All it would take is a power outage and the cooling system for the seeds would be compromised. Losing crops like these could spell disaster for the future of food security.

Right now, the crops can't be regrown in Syria while the war is ongoing, so they're being grown in Morocco and Lebanon instead. During the re-growing process, researchers will be looking into ways to make crops more resistant to things like extreme heat, drought, cold, and pests so they're more capable of adapting to climate change, reported CNN. Once the crops have sprouted seeds again, they'll send some back to Svalbard for safekeeping.

No one could've imagined that humanity would be relying on the Svalbard seed vault so early after its inception, but it's certainly reassuring that the system works as it's intended to.