This tiny device fits inside the ear and promises to translate for two people in real time.

The idea for a little in-ear translator came to entrepreneur Andrew Ochoa when he met a French girl and didn't know how to speak to her.

Fast forward to the present and Ochoa's NYC-based startup Waverly Labs is taking pre-orders for their tiny device called the Pilot.

The Pilot is a wearable device for two people that translates in real time as they speak, right into each person's ear. In some ways it recalls Babel fish from "The Hitchhiker's Guide To The Galaxy," which let humans instantly understand any language after sticking one in your ear. Except the Pilot doesn't feed on brain waves - well, as far as I know.

Waverly Labs hasn't released many details about exactly how the Pilot works, but does describe it online as a smart earpiece language translator that connects to an app for downloading and toggling languages. To start, it will translate among French, Spanish, Italian, and English before expanding to others.

Ochoa and his French friend Elodie do a sweet little demo with the devices here. 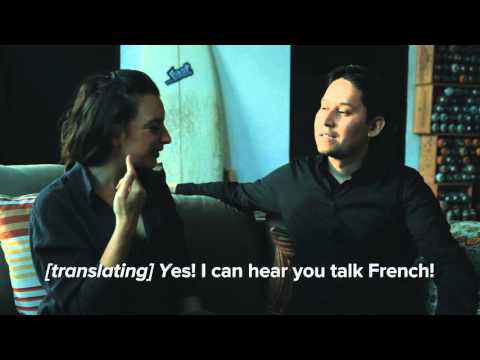 Ochoa's goal is ultimately to make a version that can translate everything happening around you in a foreign country, the Telegraph reported.

The company will be accepting pre-orders via Indiegogo soon for the Pilot earpiece, which comes in three colors and is expected to retail for around $300 when it hits the market by spring 2017. A mobile app will be released this summer.

Waverly Labs says the earpieces will work overseas and offline, huge advantages for travelers who need to communicate in areas lacking Internet access. The response so far from globetrotters on Twitter has been along the lines of "shut up and take my money."

Smartphones can now do a much better job translating in real time with various apps and Skype can translate between callers, but the in-ear device strikes me as a more elegant solution. Plus, it frees up your hands for all the gesticulating that goes so well with Romance languages.

Odds are you own a wearable computers. This past year has seen explosive growth for such devices, including fitness trackers, phone watches and motion trackers. Shipments for various devices are poised to reach 76.1 million units by the end of 2015, up 163.6 percent from 2014, according to IT research firm IDC. By 2019, worldwide shipments are expected to reach 173.4 million units. It's safe to say the industry is booming. Here’s a look at some of the most popular and intriguing wearables that hit the market this year. These wearables run the gamut in functionality, from tracking heart rate and activity to zapping your brain to improve your mood and sending off an alarm to help prevent sexual assault.

The Apple Watch, which debuted in April 2015, is a sleek wearable that resembles a mini iPhone for your wrist. It’s available in different models, including Apple Watch Sport and the Apple Watch Edition. It provides advanced health and activity tracking, including wrist-based heart rate monitoring, and can display updates or control music on your smartphone. Models start at $349.

The health-tracking Fitbit ranges in price from the $60 (for the ZIP) to the $250 (for the Surge). Known as the leader in wearable activity tracking, Fitbit sold 4.7 million devices between July and September this year, according to IDC. Real-time information about activity, exercise, food, sleep and more make this slim device attractive to those trying to improve their overall health.

This wearable zaps your brain to change your mood. The white curved Thync connects wirelessly to a smartphone via Bluetooth low-energy. After pairing it with your mobile device, Thync sends low-level pulses of electricity into your head activating pathways in your brain that make you feel calm or energized.

The second generation Motorola Moto 360 includes a heart-rate monitor, music player and GPS. Starting at $299, this Android watch can also be voice-controlled through the “OK Google” command in Google Search.

With motion-sensing technology and coaching guidance, Moov Now ($79.99), available for both Android and iOS, brings workouts to the next level. The wearable aims to improve almost all forms of exercise with instructions and real-time data, from running to cardio boxing and swimming.

Athena, developed by Philadelphia-based startup Roar for Good, is a coin-size personal safety alarm to help prevent sexual assault. The wearable, which can be worn as a necklace or used an accessory that’s clipped to a shirt pocket, belt or purse, sounds off an alarm and notifies contacts of the user’s location if it’s pressed for three seconds or longer.

A new pair of jeans called #Hellojean, created by Joe’s Jeans, are not only fashionable, but also double as a wearable device, with a dedicated pocked to charge a smartphone (as long as it’s smaller than the iPhone 6). The jeans cost $190 and the battery pack, sold separately, costs $49. The USB cord is hidden in the seams of the jeans so it can “invisibly” connect to the phone.

This wearable motorcycle helmet, with a $1,500 price tag, has a heads-up display, a 180-degree rearview camera and GPS navigation. There’s also a voice-control feature that connects to a phone and can control music.

This insole ($200) tracks your daily steps and calories burned and can also keep your feet warm. Called Digitsole, it provides an extra layer of padding to your sneakers to absorb shock and vibrations when you’re moving.

Like a Glove smart leggings fit all sizes and include sensors that take measurements -- including waist, thighs, hips and inseam -- at the press of a button. The measurements are then sent to an app that helps select the best jean brands that fit your dimensions. The leggings can be pre-ordered for $40.

This decorative activity tracker for women is an accessory that resembles a leaf and can be work on the wrist, collar or neck. In addition to tracking steps and sleep quality, it also tracks menstruation and ovulation and offers guided breathing exercises to reduce stress. The wearable starts at $119.