Hyperloop Gets Rolling With Ginormous Tubes

The high-speed Hyperloop transportation system is taking shape in the Nevada desert with a series of 50-foot carbon steel tubes.

The Hyperloop high-speed transportation system still sounds like complete fiction: Board this low-pressure vacuum tube and you'll get from Los Angeles to San Francisco in 30 minutes.

But tech mogul Elon Musk's pipe dream is actually taking shape. One company is building a test version in the Nevada desert, and they've got the ginormous tubes to prove it.

Musk is a busy guy, though, so it's not surprising that he issued an open-source design challenge, inviting ideas from around the world. Two companies took him up on it: Hyperloop Transportation Technologies and the similar-sounding but entirely different Hyperloop Technologies.

Hyperloop Technologies, led by former Cisco executive Rob Lloyd, is currently constructing a test track in the Nevada desert that features a series of huge pipes. Each "big tube" made from carbon steel is 50 feet long, and 12 feet in diameter, and weighs approximately 70,000 lbs, according to the company.

'Hyperloop Warning' And Other Signs From The Future

Simply put, a cylindrical pod gets sent down a long, depressurized tube at incredible speeds. The system won't be limited to passengers, either - Hyperloop Technologies hopes to transport cargo as a greener alternative to ships. The company plans to have a three-mile test track that can hit over 700 miles per hour completed by the end of this year.

"The thing we find most people ask is ‘show me,'" CEO Rob Lloyd told CNNMoney recently. See what the hardware looks like so far here: 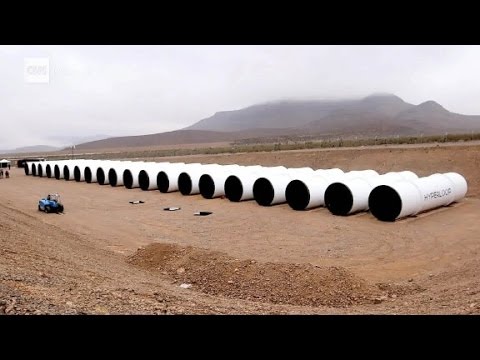 10 Wild Ways To Travel In The Future

The Hyperloop Technologies team is so confident they'll make this system happen that they offered CNNMoney's Laurie Segall a Hyperloop passenger ticket for the year 2021. That's only five years away. Meanwhile, Hyperloop Transportation Technologies says they're also working on a test track.

With friends and family so spread out, I often wish we had Harry Potter's magical traveling abilities. "If only Disapparition could be real" has become a constant refrain. Seems like someone was listening.