Hyperloop for Canada: Montreal to Toronto in 45 Min.

In the time than it would take to watch an episode of the '90s Canadian TV show "Due South," you could zip from Montreal to Toronto. That's the long-term vision driving TransPod, a Toronto-based startup working on Hyperloop pod system design.

Recently the company released video renderings of their conceptual pod, showing the components, interiors and features for passengers.

For a while, the heated race to carry out tech mogul Elon Musk's vision for a futuristic high-speed transportation system was mainly between the U.S. startups Hyperloop One and Hyperloop Transportation Technologies. Now the Canadian startup TransPod aims to develop a working Hyperloop with levitating pods that shoot through low-pressure vacuum tubes.

RELATED: 10 Wild Ways To Travel In The Future

"We have either the choice to stay where we are and do nothing -- and stay behind -- or take the lead," TransPod founder and CEO Sebastien Gendron told Global News. "And we have the ability in Canada to do it." Traveling the roughly 330 miles between Montreal and Toronto via Hyperloop would only take about 45 minutes including acceleration and deceleration, Gendron explained. A direct flight currently takes a little over an hour.

In their video renderings, TransPod presents an elongated pod resembling a jet engine made from an unnamed lightweight material. One end has air intake and there's a linear induction motor on the exterior. Inside is a cylindrical multi-stage axial compressor, a "pressure vessel" capped by a bulkhead, and an exhaust nozzle.

TransPod's system will likely transport truck pallets in the pods at first, Wired reported. Later on, different custom pods could transport passengers. The company's video shows economy and business class pods with artificial skylights as well as pods configured for business meetings and private gatherings. A lady gives a work presentation in one while a couple gets engaged over dinner in another.

If passenger pods do get built, they will probably look drastically different from those conceptual videos. Years of Subway travel from Queens to Manhattan taught me that 45 minutes is actually pretty short. Plus, the pods will be going faster than 600 mph. Maybe not the best time to present quarterly numbers or have a big romantic dinner. And, if airline travel is any indication, built-in personal TV screens are on their way out.

Here's where I should also point out that some of the biggest challenges to creating a working Hyperloop may end up being insurmountable. Plus there's the price tag. The total cost of the Canadian system could be as high as $10 billion, according to Global News. So, while waiting for the future to arrive, we might have to take a page from "Due South" and saddle up our traveling shoes to power walk away these blues. 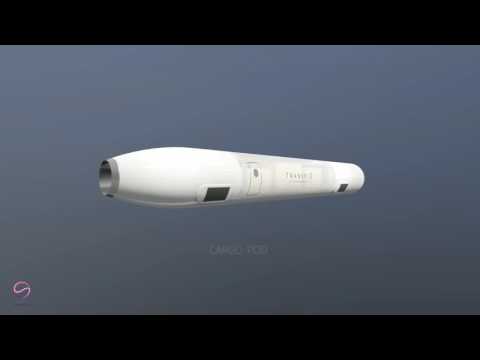