Humpback Whale Swims in a Headstand in Rare Footage

The video captures behavior that has rarely been seen or documented in the species.

A humpback whale was caught on video doing something rarely seen or documented in the species: swimming in what amounts to a headstand, its head underwater and its tail catching the breeze like a sail.

The "sailor" in the footage is a mother humpback whale swimming with her calf, with her tail sticking up well out of the water.

According to scientists with the National Oceanic and Atmospheric Administration (NOAA), the behavior is commonly seen in southern right whales, but not so much in humpbacks.

"We're not entirely sure why the whales do this," said Ed Lyman in a press release. Lyman is a resource protection specialist for the Hawaiian Islands Humpback Whale National Marine Sanctuary, the NOAA marine reserve where the behavior was recorded.

"We think this could be another way for them to rest, nurse, or just try to stay cool," Lyman said. "More observations will be needed to confirm this theory."

Other types of whale relaxation have been captured on video. Resting humpback whales were caught napping in this 2014 video, the animals drifting underwater head-first, although their tails are not protruding from the water. Sperm whales, too, have been recorded snoozing, as in this 2011 footage.

The new humpback video footage was shot off Maui in mid-February, considered a peak observation time for humpback whales at the sanctuary. 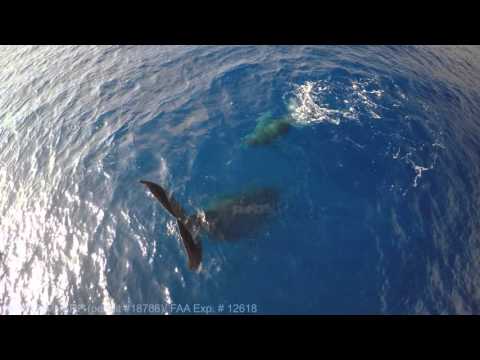 Few animals are as majestic and awe-inspiring as whales. Their sheer size, coupled with their underwater elegance, makes seeing just a hint of one breaking the ocean's surface a life goal for many of us. Among the more well-known of these glorious giants is the musical, acrobatic humpback. "This photo was taken in August off of the island of Vavau in the Kingdom of Tonga," says photographer Karim Iliya, "moments after this juvenile humpback whale took a sharp turn to avoid smashing into me. See more of his story in a

"The babies are these curious clumsy little creatures that can fill you with so much joy that your heart feels like it will explode from your chest," Iliya said.

Not every interaction is so calm and peaceful. When you swim with whales, sometimes you get a playful juvenile, but other times you can find yourself in the middle of an all out frenzy. This is what happened to Iliya after jumping into the water, not knowing battle-scarred adult male humpbacks were fighting over the right to mate with the lone female.

"Four large male humpback whales emerged, two of them broke off and started smashing into each other blowing bubbles, tails whipping around," Iliya said. "They came closer and closer all the while fighting, a 5-meter-long tale whipped near my face, and the thought occurred to me that I would be pulverized between these two school bus sized animals."

"Looking back on the images that I had taken I see that the whales were looking at me, even as they fought. It is a true testament to the gentleness of these giants that they would take the time and effort to avoid crushing this tiny little creature before them. "

VIDEO: Whales Get Sunburned, Too

"The thing that I loved most about photographing humpback whales is the level of interaction that you have with them. They are highly intelligent creatures with distinct personalities and will convey a range of emotions and attitude like curiosity and playfulness, or even annoyance."