You can practically feel the sea spray in a new video showing the whale rescue.

A camera positioned incredibly close to an entangled whale captured the marine mammal's dramatic rescue on a video, which was released this week by the Sea Shepherd Conservation Society.

The footage highlights the dangers associated with illegal usage of gillnets, which wound up ensnaring the clearly stressed female humpback whale. Gillnets, commonly used by commercial and artisanal fisheries, consist of vertical panels of netting meant to allow the heads of fish to pass through, but that entangle the fish's gills upon withdrawal.

Totoabas are critically endangered fish that live in the Gulf. They are targeted for their swim bladders, which are sold on the black markets in Asia. 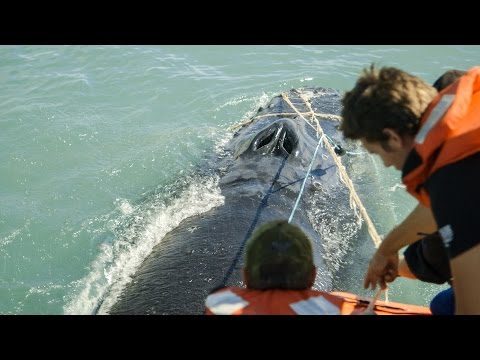 The rescue happened on February 19, when the crew of Sea Shepherd's research vessel R/V Martin Sheen spotted the struggling humpback whale within the Vaquita Refuge in the Gulf at Baja California, Mexico.

The conservationists were actually at the site to protect the refuge's namesake vaquita, which is a type of critically endangered porpoise from the northern part of the region. Its entire population numbers fewer than 100 individuals. Sea Shepherd's effort to save this marine mammal has been dubbed "Operation Milagro."

The vaquita can get caught in the illegal gillnets as bycatch, but in this case, it was a humpback whale that became a victim.

When the whale was spotted, Captain Oona Layolle - campaign leader and captain of the M/V Farley Mowat - notified the Mexican Navy and the Federal Attorney for Environmental Protection (PROFEPA). The crew then began the rescue operation of the female whale, which was estimated to be 35 feet long.

As the video shows, crews from both vessels worked to free the whale by cutting the gillnet off of her head and torso. Les Stroud, host of the TV show "Survirorman," was also on board the M/V Farley Mowat and helped to free the whale.

Right after the rescue, Stroud said, "This is true conservation in action. Today, we were able to save the whale and remove another illegal gillnet. It is an honor to be a crewmember with Sea Shepherd Conservation Society. Cutting that net and freeing the whale was a life changing experience."

According to the organization, gillnets as well as longlines (lengthy lines with baited hooks attached at intervals) have trapped three totoabas, seven rays, another whale, and dozens of juvenile sharks in the region in just the past few weeks.

This humpback whale was entangled in an illegal gillnet and rescued by a member of the Sea Shepherd crew.

The new IMAX 3-D film "Humpback Whales" follows the marine mammals during their 10,000-mile migration. The film opens nationwide on Friday, Feb. 13. Pictured: A whale and her calf show their flukes off the coast of Maui. Baby humpbacks emulate their mothers’ social behavior as they learn important survival skills.

A mother humpback whale and her calf. The baby may grow to a length of nearly 60 feet and weigh as much as 50 tons.

VIDEO: Whales Get Sunburned Too

A humpback whale and calf surface off the coast of Maui.

Director Greg MacGillivray films humpbacks with an IMAX camera while on location in Maui, along with assistant cameraman Robert Walker (left) and marine biologist Jim Darling.

A group of humpback whales bubble-net feed off the coast of Alaska. This is the one of the most complex social behaviors of any marine mammal.

An adult humpback whale breaches off the coast of Maui. Males create a song that lasts as long as 20 minutes at time, sometimes for hours, and is believed to be used in mating.

Marine biologist Jim Darling observes a humpback whale from a research vessel off the coast of Maui.

A humpback whale surfaces off the coast of Tonga.

The whales, now considered endangered, where hunted nearly to extinction until a moratorium on humpback whaling in 1966.

VIDEO: Why is Whale Vomit So Valuable?

A humpback whale breaches in Alaska’s Inside Passage.