Ariel, is that you? This bright orange underwater robot might not have the fairytale character's beautiful form, but the humanoid bot can dive like a fish and safely explore dangrous areas for its friends on the surface.

Described as a robo-mermaid, the OceanOne robot was created by a team at Stanford University led by computer science professor Oussama Khatib. Initially intended to study coral reefs at depths in conditions that would be dangerous for human divers, the robot has become an underwater super-explorer.

Measuring about 5 feet in length, OceanOne has a tail that contains batteries, multi-directional thrusters and computers, according to the university. This isn't just another submersible, though. The tethered bot has a human-like head with stereoscopic vision and articulated hands that can be controlled from a ship through a haptic interface. Sensors automatically gauge water conditions, activating thrusters to keep the bot in place.

The built-in smarts and haptics turn the robot into a sophisticated virtual diver that can go thousands of feet deep without needing any oxygen. "The most amazing thing about it is that you can feel what the robot is doing while sitting up on the boat," Khatib explained in a Stanford University video.

Recently OceanOne was put to the test 20 miles off the southern coast of France. Working in partnership with French underwater archeology researchers, Khatib's team sent the bot to explore "La Lune," the King Louis XIV flagship that sank in 1664. With Khatib's hands at the controls, the bot gently hooked a vase and put it in a recovery basket.

After the robo-mermaid was back on board, everyone naturally celebrated the find with champagne. The bot even got bathed in some. The vase ended up being in surprisingly good condition, but the bot has bigger fish to fry.

Khatib and his team envision OceanOne being used for more dangerous tasks like underwater mining, oil rig maintenance and disaster recovery. The team hasn't lost sight of its original intent to monitor coral reefs worldwide, either. They see the human-friendly bot as a way to do that safely.

While the bot can't actually sip champagne or do a victory dance, it's still undeniably part of our world. 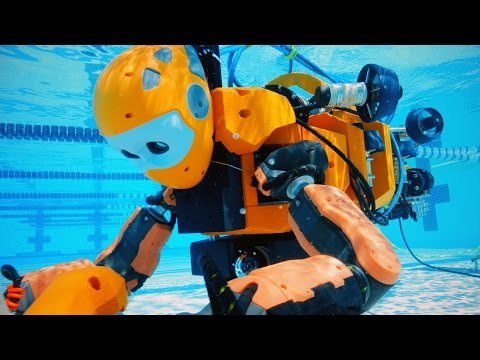