The creation of a human-pig chimera paves the way for growing human cells, tissues and organs for regenerative medicine.

When research on chimeras, organisms containing cells from different species, started to take off a few decades ago, the premise was so unorthodox that the word "chimera" (pronounced ky-MEER-uh) - the name of a fire-breathing hybrid beast in Greek mythology - was often interpreted as "crazy idea."

Even nuttier was the notion that scientists could inject human cells into another animal to possibly create a human-ish organism.

Much has changed over the years, with human cells routinely transferred to mice for studies on cancer, immunity and more. Now, in an extraordinary step, scientists have created chimera embryos that are part-human, part-pig.

"Our ultimate goal of this research is to produce functional and transplantable human organs using large host animals to solve the world-wide shortage of organ donors," Juan Carlos Izpisua Belmonte, senior author of a paper on the research, told Seeker. "This is a dream, really, and it may take years to achieve this goal. Our current study only marks the first step, although a very important one, toward that goal."

Chimeras' Mythical Past
Even Belmonte, who is a professor in the Salk Institute for Biological Studies' Gene Expression Laboratory, can see how some people might be shocked by the idea of a human-pig chimera.

"Interspecies chimeras have captured the wild imaginations of both ancient civilizations and modern society," he said. "They are often depicted as fearsome creatures in Greek mythology. But actually chimera-form figures have also been worshiped as deities in polytheistic religions." 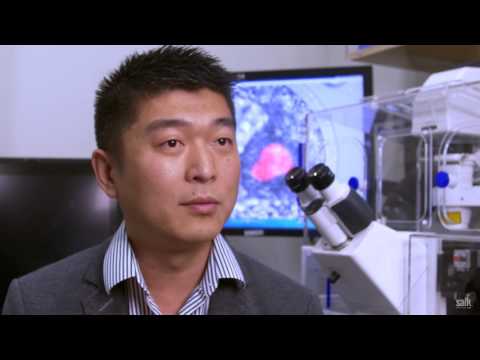 It can be a stretch to pair thoughts of such organisms, given their mythological connotations, with the sobering realities concerning organ transplant needs. In the United States alone, approximately 22 people die each day waiting for such a transplant. Both here and around the world, there is a dire shortage of organs to meet medical needs. If a patient does receive a donor organ, his or her body might reject it, or the person's risk for cancer might increase.

The idea is to inject human stem cells into animal embryos and allow the stem cells to grow into the missing organ, which would then be harvested. Although researchers can turn stem cells into specific cell types, the results are not equivalent to cells produced within embryos. In short, they can't just grow viable human organs in a lab with only human cells - at least not with today's scientific capabilities.

"Currently there is no technology to culture embryos in the lab beyond a few days," Belmonte said. "Our understanding of animal development is still very limited and we simply don't have the information and technology to replicate this process in vitro. This is exactly why we turned to use animals, such as the pig, to help guide human cells to become functional organs and tissues."

From a Rat-Mouse to a Pig-Human
Belmonte collaborated with lead author Jun Wu and an international team of scientists for the breakthrough study, which is published in the journal Cell. The path to the pig-human chimera required several steps.

To test their methods, the researchers first created a rat-mouse chimera, a feat initially achieved back in 2010 by another scientific team. The chimera in this case, however, lived the entire lifespan of a mouse (two years), and aged normally.

"To our best knowledge, this is the longest-lived rat-mouse chimera to date," Belmonte said.

He and his colleagues next used gene-editing and stem-cell technologies to grow a rat heart, eyes and pancreas. Another research team this week reported in the journal Nature that they grew mouse pancreases in rats, and then used them to cure diabetes in mice.

As senior author Hiromitsu Nakauchi of Stanford University and his colleagues wrote, the "data provide proof-of-principle evidence for the therapeutic potential" of such work.

Belmonte and his team additionally grew a rat gallbladder within their mouse-rat chimera. Wu said that rats in nature do not have a gallbladder. Somehow they lost it over the 18 million years since mice and rats separated evolutionarily.

The team then faced the bigger challenge: introducing human cells into a non-rodent organism. Even if a human-mouse chimera could produce organs, these organs clearly would be too tiny for human medical needs. So Belmonte and his colleagues decided to use cow and pig embryos for the hosts. Experiments with cow embryos proved to be more difficult and costly than those on pigs, so they chose to focus solely on pigs.

The pigs largely came from two commercial pig farms located in Southeastern Spain. That posed its own difficulties.

"Most of the pigs used in this study were housed in farms used for meat production, rather than research purposes," Belmonte explained. "We had to convince the farmers to collaborate on this project. In addition, we cannot perform experiments whenever we want. For example, farms are typically closed during the summer due to hot weather."

The researchers persevered, injecting several different forms of human stem cells into pig embryos to see which would survive best. Those that did were "intermediate" human pluripotent stem cells. So-called "naïve" cells have unrestricted developmental potential, while "primed" cells have developed further.

"Intermediate cells are somewhere in between," Wu noted.

The human cells survived and formed the human-pig chimera embryos, which were allowed to develop for three to four weeks.

"Once the implants were removed," Belmonte said, "the [host] sows were euthanized and incinerated."

Cautions and Concerns
One reason the sows were incinerated was to eliminate any chance of the human cells escaping into an adult pig's body. Belmonte assured that the chances of that happening are "extremely unlikely," in any case.

"Ethically there have been some concerns raised about generating animal chimeras with human cells, particularly in cases where the cells might contribute extensively to the brain or to the germ cells," Janet Rossant, a senior scientist and chief of research emeritus at the Hospital for Sick Children, told Seeker. "This possibility needs to be carefully assessed in each specific experimental protocol and steps put in place to try to restrict unwanted contributions to tissues other than the ones required."

In a PLOS Biology paper, Insoo Hyun of Case Western Reserve University said that the primary worry "is that in the process of biologically humanizing a research animal, scientists may end up also morally humanizing the resulting chimera, especially if there is acute human/non-human chimerism of the central nervous system."

The good news is that the human contribution to the pig-human chimeras was "low," Wu said.

What's important, Belmonte said, is that the study demonstrated that human pluripotent stem cells could contribute and differentiate in a pig embryo, even if the result was more pig in nature than human.

Rossant agrees that the study was a major endeavor. In the case of the rat-mouse chimeras, she said, they "are proof of principle that it is possible to generate a rat organ in a mouse, and so in the future it may be possible to extend this approach to species like human and pig that are further apart evolutionarily."

If Rossant is right, patients in the future could receive organs developed from their own stem cells, avoiding the current problem of organ rejection after transplants as well as many other possible complications. There would also be no organ shortage, since researchers could produce them to order.

Much work needs to be done before such goals are reached, however, and concerns still exist over animal welfare issues and other matters. Many challenges remain ahead, including technological, scientific, ethical and societal considerations.