For the first time, a super-Earth's atmosphere has been analyzed -- but don't make any vacation plans to visit.

For the first time, a super-Earth's atmosphere has been analyzed - but don't make any vacation plans to visit. The planet is blisteringly close to its planet star (exhibiting temperatures of 3,600 Fahrenheit or 2,000 Celsius) and has an atmosphere mostly made up of hydrogen and helium, like a gas giant planet.

Hydrogen and helium are common elements in young solar systems as those are the elements that make up young stars. Typically, however, smaller planets tend to lose the hydrogen and helium over time into space because their gravity is so low; the light elements escape, especially if a star's radiation pushes against the atmosphere. Gas giant planets can hold on to those elements due to their stronger gravity.

On small planets, sometimes the hydrogen/helium atmosphere is replaced by a secondary atmosphere, which was the case on Earth. Our current mix of nitrogen, oxygen and carbon dioxide likely came from internal processes (such as volcanism) and the evolution of plants.

"We did not expect 55 Cancri e to retain this much of its primordial gas atmosphere," said Ingo Waldmann, a post-doctoral research assistant at University College London who participated in the research, in an e-mail to Discovery News. Waldmann pointed out that the planet is the only known super-Earth with such a high temperature, but the astronomers had thought it would lose most of its atmosphere due to the intense radiation of its parent star. Why it held on to the hydrogen and helium is poorly understood. 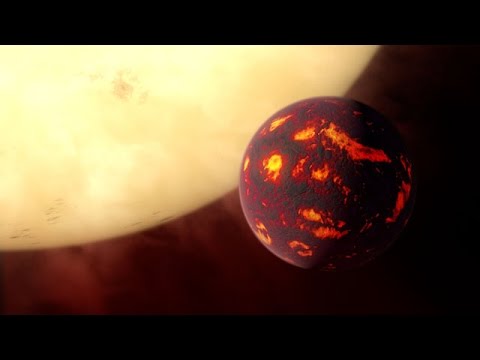 Astronomers have a few sample measurements of planetary atmospheres from outside our solar system, but these are from gas giants that are easier to spot in telescopes. As the large planet passes across the face of its planet star, the elements detected in a telescope change slightly. That change is believed to represent the atmosphere of the planet.

The team decided to try for a smaller planet, but one that was orbiting a bright star to make it easier to distinguish the atmosphere of the planet from the elements in its parent star. A strong candidate for this work was the Hubble Space Telescope's Wide Field Camera 3, which was installed by astronauts in 2009 and usually is used to track star or galaxy formation.

"The WFC3 camera on Hubble is a very sensitive instrument, not initially designed to observe bright stars, and the instrument would overexpose like your cell-phone camera held towards the sun would," Waldmann said. "In 2012, the scanning mode was introduced to address this. Essentially we now quickly move Hubble across the star and ‘smear' the spectrum across the detector. This helps the overexposure issue, but makes the data analysis very difficult."

An additional challenge came from 55 Cancri e's close distance. It is orbiting a sun-like star that is only about 40 light-years away. Because the star is so bright, Waldmann said, the scan speed had to be much faster than what was used before. The team studied the situation and developed a method that can extract a viable signal from the data, a signal that was strong enough to detect elements in the small planet's atmosphere.

"If we can do this with Hubble, we are very confident that we can significantly improve with future instruments," Waldmann said, pointing to the future James Webb Space Telescope (JWST), Transiting Exoplanet Survey Satellite (TESS) and PLAnetary Transits and Oscillations of stars (PLATO) telescope as examples. "These next-generation facilities will blow the field of exoplanet spectroscopy wide open and allow insight that, to date, we cannot even imagine. In other words, we really are on the threshold of taking planetary science from our solar system into the galaxy."

Waldmann said the researchers have two future directions for research: to look at super-Earth atmospheres more broadly, and also to do follow-up observations of 55 Cancri e. There appear to be hints of hydrogen cyanide in the atmosphere, but to confirm this they will need a telescope such as JWST, which can observe in longer wavelengths of light than Hubble.

The research will be published in the Astrophysical Journal, and is now available on the pre-publishing site Arxiv.

Astronomers using the Hubble Space Telescope recently completed the largest and most sensitive survey of dust surrounding young star systems. The survey zoomed-in on stars that are between 10 million to 1 billion years old and the source of the dust is thought to be the left-over debris from planet, asteroid and comet collisions after systems of planets have formed.

The research is akin to looking far back into the history of our solar system, seeing the inevitable dusty mess left over after the Earth and other planets evolved. "It's like looking back in time to see the kinds of destructive events that once routinely happened in our solar system after the planets formed," said Glenn Schneider, of the University of Arizona's Steward Observatory and lead scientist on the survey team.

Read on to see some of the beautiful variety of circumstellar disks observed by Hubble.

One of the major findings to come from this survey is the stunning diversity of dust surrounding these young stars. Traditionally, circumstellar dust is thought to settle into an orderly disk-like shape -- but it turns out that the opposite is true.

"We find that the systems are not simply flat with uniform surfaces," said Schneider. "These are actually pretty complicated three-dimensional debris systems, often with embedded smaller structures. Some of the substructures could be signposts of unseen planets."

One stunning observation of the star HD 181327 exhibits a bright ring of dust containing irregularities, potential evidence of a massive collision that has scattered debris far and wide. "This spray of material is fairly distant from its host star — roughly twice the distance that Pluto is from the Sun," said Christopher Stark of NASA's Goddard Space Flight Center, Greenbelt, Md., and co-investigator in the survey team. "Catastrophically destroying an object that massive at such a large distance is difficult to explain, and it should be very rare. If we are in fact seeing the recent aftermath of a massive collision, the unseen planetary system may be quite chaotic."

Another interpretation for the irregularities could be some kind of interaction with unseen interstellar material. "Our team is currently analyzing follow-up observations that will help reveal the true cause of the irregularity," added Schneider.

Like the diversity of exoplanetary systems astronomers have discovered, it appears the accompanying dust disks also share this characteristic, possibly indicative of gravitational interactions with planets orbiting the stars surveyed by Hubble.

Since 1995, thousands of exoplanets have been discovered orbiting stars in our galaxy. Over the same period, however, only a couple of dozen circumstellar disks have been imaged directly. This is down to the fact that the scattered light off these disks is extremely faint (around 100,000 times fainter than the parent star's light). The technology and techniques are only recently becoming available for scientists to not only block the star's blinding light, but to also boost the sensitivity of observations to pick out this scattered light that would otherwise be obscured from view. Fortunately, Hubble's high-contrast imaging has been key in making this survey a success.

By studying these disks of dust and their surprising variety of morphologies may help astronomers better understand how the Earth-moon and Pluto-Charon systems formed. Through planetary collisions, the debris from the early solar system may have coalesced to create many of the natural satellites we see today, 4.6 billion years later. The results of this survey have been published in The Astrophysical Journal.

For more information about this Hubble survey and high-resolution images, browse the HubbleSite.org news release.