A scientist in Finland is searching for the source of the faint and mysterious sounds sometimes heard during displays of the northern lights.

For more than 15 years, a lone scientist in southern Finland has spent countless winter nights among the snowy fields and frozen lakes around his village, in pursuit of one of the most ephemeral mysteries of the heavens: the faint, almost phantasmagorical sounds heard during intense displays of the aurora borealis, or northern lights.

The epic study by acoustician Unto K. Laine includes the first audio recordings of the muffled crackling or popping sometimes heard overhead during spectacular aurora displays.

Over the years, the sounds of the northern lights have been explained as illusions, imagination, inebriation or even voices from the spiritual world. [In Photos: Recording Mysterious Sounds from the Northern Lights]

But Laine has shown the sounds are real, and he thinks he has found what causes them: sparks of electricity discharging beneath the aurora in an inversion layer of the atmosphere that can form in clear and calm weather conditions.

Laine told Live Science that he became interested in the phenomenon of so-called auroral acoustics about 25 years ago, when he and his friends heard sounds from an aurora after a nighttime music gathering in Finnish Lapland, in the far north of the country. 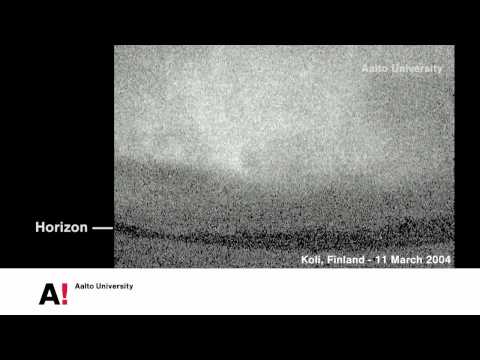 "This experience never left me. We had to concentrate - we did not move or talk at all," he said. "A few of us did not hear it, because at that time, the aurora wasn't very strong, and it was a very low-intensity sound. I could never forget this experience; it was so strange."

In 2000, Laine started to keep a careful watch on space weather forecasts for reports of intense solar flares that could supercharge auroras over the following nights. Auroras are caused by charged particles from solar flares interacting with the Earth's magnetic field and raining into the upper atmosphere, where they excite the nitrogen and oxygen atoms of the air to create the dramatic and colorful light shows.

"During all these years, I have checked the space weather two to three times a day, so not to miss any aurora events - and always, when the weather conditions are good, I go," he said.

Sounds out of space

Laine's solitary hunt for the elusive sound of the northern lights demanded great patience. There have been few intense auroras over Finland in the past 16 years, thanks in part to the "solar minimum," a period of decreased activity in the sun's natural 11-year solar cycle. Between 2004 and 2007, the sun experienced a lull in activity, according to NASA, which meant fewer solar flares and fewer auroras. In 2011, as solar activity ramped up, Laine started using a VLF loop antenna to measure magnetic fields and a microphone array to triangulate the locations of crackles and pops in the ever-changing sounds from the aurora. [Aurora Photos: See Breathtaking Views of the Northern Lights]

"The sounds are diverse and can vary quite a lot, and it is very possible that there are many different mechanisms creating the sounds," he said. "I have been concentrating more on the clapping, popping and crackling, because they are good for estimating the direction of the sound."

In September 2011, during an intense aurora overhead, Laine's microphone array was able to triangulate the locations of several distinct "clap" sounds from the celestial display. To his surprise, the results showed the sounds were originating just 230 feet (70 meters) above the ground - much lower than the auroras themselves, which occur at altitudes of up to 300 kilometers (185 miles).

Laine's unexpected discovery partly explained one of the mysteries of the acoustics of auroras: How can faint sounds from auroras so high in the atmosphere be heard at the surface of the Earth?

In a research paper published in 2012, which included the first recordings of auroral sounds ever made, Laine also ruled out a theory that the sounds could be made by trees, because his microphones had been set in open fields and beside frozen lakes.

The acoustics of auroras

Now, Laine thinks he may have discovered a mechanism in the atmosphere that explains at least some of the sounds caused by auroras.

During an intense display of the northern lights over southern Finland on March 17 and 18, 2013, when the temperature in the village of Fiskars was minus 4 degrees Fahrenheit (minus 20 degrees Celsius), Laine recorded hundreds of auroral sound events. [Northern Lights: 8 Dazzling Facts About Auroras]

He also measured magnetic pulses that occurred immediately before each sound event, which corresponded in strength to the volume of the sounds.

Then, Laine matched his measurements to data from the Finnish Meteorological Institute for the same night, and found they had measured a thermal inversion layer in the atmosphere - a blanket of relatively warm air that traps cold air next to the ground in calm conditions - at the same altitude where the noises originated.

In research presented June 22 at the Baltic-Nordic Acoustic Meeting in Stockholm, Laine proposed that the sounds are caused by the buildup of electrical charges in the inversion layer, while opposite charges build up in the trapped cold air.

When an aurora occurs over the charged inversion layer, geomagnetic disturbances cause the accumulated electricity to discharge with sparks that create measurable magnetic pulses and sounds, Laine said.

This could explain why sounds caused by auroras in the upper atmosphere can be heard at the Earth's surface, he said, and why the volume of the sounds appeared to vary with the intensity of the auroras.

With the solar activity cycle now entering its downward swing, Laine may have fewer opportunities over the next few years to continue his hunt for the song of the northern lights. But, he hopes his research will inspire more observations of aurora sounds and will spark discussions about the mysterious physical mechanisms that create them.

Looking back, Laine said, the weather conditions on the night 25 years ago, when he first heard the sounds of the northern lights, were perfect for auroral acoustical inspiration.

"It was very cold weather, about minus 35 degrees C [minus 31 degrees F], with clear skies, no clouds and no wind. So it was absolutely the best conditions to hear the sounds," he said.

This story originally appeared on LiveScience.com.