This Is How We Taste Water

Caltech researchers have found a cell response on mammalian tongues that is making them rethink the existence of five taste senses.

Can you taste the difference between water and lemon juice? That may seem like a question with an obvious answer, but new research shows that these different liquids may stimulate the same taste buds.

Scientists at Caltech published a study this week that uses this new information about sour taste bud cells to challenge current theories of taste and perception.

It’s important to note that when the scientists say “taste,” they’re not talking about whether or not water tastes good. Rather, they are looking at the idea that taste buds can detect water as a unique substance, like they can recognize the five other basic tastes (bitter, sweet, salty, umami, and sour).

Scientists have known for a while that bugs and amphibians “taste” water, so it’s not a big stretch to think that humans might have a separate detection system for it as well. What’s more, it makes sense that we would have a physical way of recognizing water — we rely on it for survival, after all.

“Water is such an important chemical,” said Yuki Oka, whose lab at Caltech completed the study, “so there should be some sensors [for it] on the tongue.”

RELATED: Why Does Food Taste Better When You're Drunk?

The researchers, including Oka and lead author Dhruv Zocchi, originally wanted to see if water had an actual flavor. But, as Oka noted, taste is based on perception. Instead, they focused on finding a mechanism that allows mammals to detect water and distinguish it from other liquids.

They predicted that one of the cells that detects the other five major tastes may hold the key. In order to see if any taste buds were triggered by water, the researchers genetically “silenced” the taste bud regions one by one. They then used electrical recordings to see which cells responded when saliva was washed out of the mouth with water.

Interestingly, the results showed that the sour cells responded.

“It was surprising,” said Zocchi. But it also makes sense. The researchers’ hypothesis is that sour taste buds respond not to a specific taste, but to levels of changing acidity in the mouth. What might be happening, Zocchi told Seeker, is that since the water is slightly more acidic that the saliva that it washes out, the lowering change in pH may trigger the sour cell response. 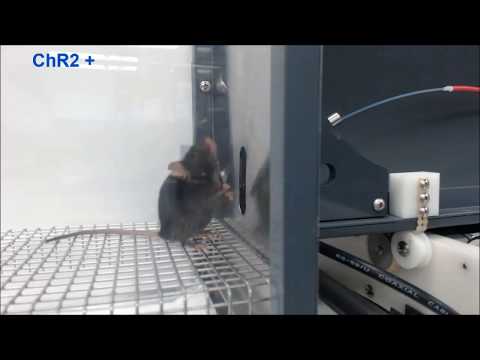 Sour taste cells in these mice have been genetically engineered to be stimulated by light. When the mouse is thirsty, it goes to its water source and finds only light — which gives it the sensation of water, suggesting that sour cells mediate the water response.

Armed with their results, the researchers then tested their hypothesis on thirsty mice. Using a technique called optogenetics, they used blue light as a trigger for the sour taste cells instead of water. When the dehydrated mice licked a water spout, they were given a blast of blue light, triggering a response in the sour cells. The thirsty mice kept drinking from the spout, even though no water was coming out. But, said Oka, they were getting a “partial sensation of water” that kept them coming back to the spout to quench their thirst.

Though the study was simple, Oka and Zocchi noted it could have profound implications for our understanding of the physical underpinnings of perception.

“This changes our concept of sensation, and how we perceive,” Oka said. Since the same receptor seems to detect both sour and water, he added, the findings “might challenge the existence of five basic tastes.”

The researchers plan to look next at the link between the brain’s feeling of thirst and the mouth’s perception of water. Understanding how these complex systems relate may reveal even more new pathways of perception.