Has Stephen Hawking found the 'emergency exit' for information falling into a black hole?

Black holes, they used to be so simple.

There was a time when, using the rules of general relativity, you could imagine an infinitely-dense singularity surrounded by a gravitational zone of no-escape called the "event horizon." These components, with a few other details, described the basic anatomy of a black hole.

The textbook explanation is fairly clear: nothing, not even light, can escape the gravitational clutches of the black hole's event horizon. It's a one-way ticket; if an astronaut strays too close to the horizon, they get dragged in, eventually falling to his or her doom via the horrific effects of spaghettification.

Although this is an over-simplification, it was a fairly decent explanation about what was going on. But then, in the 1970′s, British theoretical physics guru Stephen Hawking came forward with his bedrock theory of evaporating black holes. And now, as an extension of his theory, Hawking thinks that black holes aren't the one-way street the textbooks have led us to believe.

Hawking Radiation Trouble The complication that black holes can evaporate is a consequence of the weirdly wild quantum world. In a vacuum, quantum physicists predict that pairs of "virtual particles" are constantly popping in and out of existence. Therefore, a "true vacuum" is never truly empty; it's actually buzzing with pairs of quantum particles that pop into existence and then annihilate within a minuscule time frame. Usually this continues without a hitch - particles appear out of the vacuum, they annihilate with their partner and the universe goes about its business.

But if you add a black hole to the mix, things get a bit crazy.

As we've already discussed, the black hole's event horizon is the point of no escape. So what happens when a pair of virtual particles pop into existence at the horizon and only one falls in? Well, the second "virtual" particle, which has lost its annihilation partner, is ejected away from the black hole and becomes "real." In the process of becoming a real particle, it steals a tiny amount of mass from the black hole (quantum mechanics never pretended to make logical sense). With this process happening all the time at the event horizon, the black hole starts to physically lose mass - it is evaporating via Hawking radiation.

So far I've only given you a taste about how weird quantum field theory is, and it's about to get weirder, but first we need to discuss a little background.

ANALYSIS: Death By Black Hole Firewall Incineration It Shall Be

General relativity and quantum field theory don't play nice. Both areas of physics describe the fundamental nature of space, time and matter over micro (quantum) and macro (cosmological) scales. But after decades of trying to see how the two overlap, physicists have drawn a blank. And with the recent discovery of the Higgs boson, the quantum "recipe book" - called the Standard Model - has once again been proven to represent a very precise description of how our universe works.

The Standard Model seems to have a problem with gravity, fundamentally. So far, physicists have not been able to find a particle that mediates the gravitational force (hypothesized as the "graviton") and despite their best efforts there seems to be no way to reconcile this conundrum. And in recent years, black holes have become another battleground for general relativity and quantum field theory.

Antithesis of "No Drama"

When matter (and therefore "information") falls into a black hole, it is removed from the known universe and is effectively destroyed. This is a problem; general relativity cares little for information, which all matter possesses, but quantum theory cares a lot for information and it explicitly states that information cannot be destroyed.

But this quick fix created another problem. In 2012, a group of physicists led by Joseph Polchinski of the University of California in Santa Barbara found that for information to be retained by Hawking Radiation, there would be a "firewall" of violent quantum energy churning away just beyond the event horizon.

Thinking back to our unlucky astronaut falling into a black hole's event horizon, in a general relativity universe, the astronaut would experience nothing when drifting through the event horizon (except if that astronaut was Matthew McConaughey, he'd experience some bright lights and get stuck behind a bookcase). Of course, the astronaut will eventually be ripped to shreds, but he or she wouldn't be incinerated. This thought experiment is known as the "no drama" postulate.

So now physicists are battling with equations trying to solve the "information paradox" and over the last couple of years the greatest minds in theoretical physics have contributed to the firewall showdown, and Hawking has not strayed far from the debate.

Last year, Hawking discussed the possibility of replacing the event horizon with a theoretical construct known as an "apparent horizon" - rather than a definite boundary (the event horizon), perhaps the notion needs to be reworked and there's in fact a horizon that changes shape in response to quantum fluctuations inside the black hole. This would create a chaotic mess of information beyond the apparent horizon, which doesn't violate either quantum dynamics or general relativity.

"Thus, like weather forecasting on Earth, information will effectively be lost, although there would be no loss of unitarity," Hawking wrote in a paper at the time, meaning that although the information can escape from the black hole, its chaotic nature ensures it cannot be interpreted, sidestepping the firewall problem.

Needless to say, this didn't settle the debate among Hawking's peers.

And now Hawking is in the news yet again, having appeared at the KTH Royal Institute of Technology in Stockholm on Monday (Aug. 24) discussing his refined explanation at a public lecture for how he thinks information is handled by black holes.

"I propose that the information is stored not in the interior of the black hole as one might expect, but on its boundary, the event horizon," Hawking said at the lecture, according to Tech Insider.

Hawking elaborated to say that the information retained in objects falling into the black hole is converted into a 2-dimensional "hologram" where it is then captured in Hawking radiation and carried away from the black hole. But don't go getting romantic notions of using black holes as some kind of super-advanced computer hard-drive, the information will be a jumbled chaotic mess.

"The message of this lecture is that black holes ain't as black as they are painted," Hawking said. "They are not the eternal prisons they were once thought. Things can get out of a black hole both on the outside and possibly come out in another universe."

We have to wait for a paper that Hawking and his collaborators will publish in a few weeks to find out what he means by "another universe," but some theories behind the nature of black holes suggest that they are gateways to other, parallel universes, or even universes in their own right.

The Event Horizon Telescope Cometh For now, it seems Hawking may have formulated an "emergency exit" for information falling into a black hole, but we won't really know what's going on until we study a black hole up close - a fact that will likely prove to be an impossibility.

But soon, as already reported by Discovery News, we're going to get a profound direct look at a black hole's event horizon, albeit from afar.

Astronomers of the world-wide Event Horizon Telescope (EHT) project are close to staring deep into the core of our galaxy to resolve the predicted disk of light surrounding the Milky Way's supermassive black hole, Sagittarius A*, located over 20,000 light-years away. And it just so happens the team were available for questions at a special Reddit Ask Me Anything (AMA) event on Wednesday (Aug. 26) when the question of Hawking's take on the black hole information paradox and how the EHT might be able to help was asked.

"Stephen Hawking has been trying for years to find ways to resolve the information paradox by either tweaking the way that quantum field theory is combined with general relativity or by changing the way classical black holes look," wrote Dimitrios Psaltis, Professor of Astronomy and Physics, University of Arizona, and member of the EHT team. "If the correct answer is closer to the latter, then the Event Horizon Telescope will offer a unique look into it."

Hawking's work may be deep within the realms of advanced theoretical ideas, but the fact that we are soon going to have a telescope that can at least investigate some observational aspects of the information paradox is nothing short of profound.

Want to know more about the information paradox and the firewall? Check out a new TestTube Plus+ video where Trace Dominguez and I try to wrap our heads around some awesome black hole science: 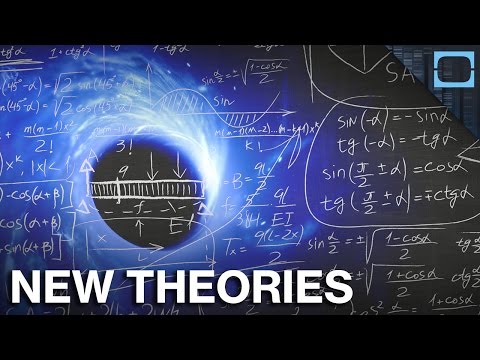