In the really cool sci-fi visions of virtual reality - Star Trek's holodeck, say - the illusory environments aren't just visual. You can actually touch and interact with the VR objects physically. That's what makes it science fiction.

Still, a new technology out of the U.K. suggests we may be inching closer to a holodeck style experience. UltraHaptics uses a system of projected sound waves to create 3-D virtual objects that you can actually feel with your hand.

The concentrated sound waves are emitted from multiple speakers situated underneath a platform. When the sound waves hit your hand, they exert pressure that makes it feel like you're touching an invisible floating object. So far, the system can only project basic shapes - like a sphere, cube or pyramid. But researchers at the University of Bristol hope to improve on the "sonic resolution" with time.

The trick is that the UltraHaptic system uses a sophisticated motion sensor system to track the exact position of your hand. The "sound object" doesn't actually exist in the empty space. Instead, the system directs ultrasound at the precise location and frequency to approximate a particular tactile sensation.

The design team says the technology could have potential future applications in commercial VR entertainment systems, educational displays or even medical diagnostics.

Keep in mind that the UltraHaptic system has no visual component. To get the full effect, the ultrasound system would need to be paired with a synchronized hologram generator. The images in the photos and accompanying demo video - see below - are evidently inserted for illustrative purposes. Still, I have a good feeling about this one, as it were. 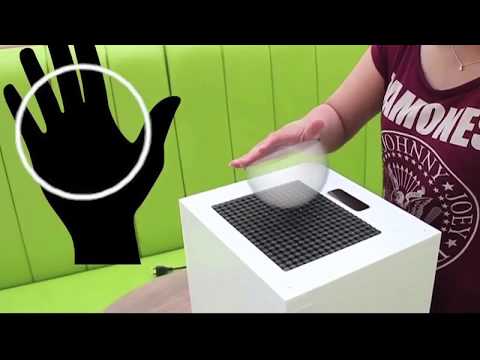 Signs From the Near Future

features just that, imaginary signs and warnings that we might come across eventually. The image blog is the brainchild of Fernando Barbella, an artist and creative director in Barcelona.

Barbella creates the images by taking stock photos and manipulating the images in Photoshop. "I look for casual and amateur images on forums and online boards, then I work on putting together the whole thing, trying to integrate the signs in ordinary and very usual places where they would be relevant," Barbella says.

How does Barbella come up with ideas? Any way he can: "Since I'm doing this during my free time, I usually came up with the idea in any give moment of the day, mostly while commuting by train, or taking my dogs for a walk at night."

Barbella says the inspiration for the project came when he was trying to devise a graphical header for another project.

"The idea came from trying to figure out how these upcoming technologies would interact with us," Barbella says. "But at the same time not showing these technologies at all, since we’ve already seen many pictures of those technologies."

Once inspiration for a new image strikes, Barbella immediately starts picturing the context. "I write it down on my mobile or on paper and I try to figure out the best and more natural way to feature it."

Subtlety is a key part of the design, Barbella says. The idea is not to trumpet the oddness of the signs, but rather to emphasize their "normalness" by placing them in very ordinary settings. "We're all very acquainted with signage," he says. "Of course there are some few touches of subtle humor, since I really enjoy irony and black humor a lot."

Barbella says he hopes the project inspires people to think about their relationship to technology. "The goal of the project is to expose a point of view, and to make the visitors think about how far -- and how fast -- we want to go in this kind of technological race," Barbella says. "Although I'm an innovation fan, I'm not an expert or a man of science, and I think there are huge chances to make some mistakes in terms of the final result."

Barbella says he plans to keep updating the image blog regularly, and perhaps take the project in new directions. "It would be nice to blur the line between the online and offline worlds, he says. "Perhaps a small book or a temporary expo in some physical space, or even producing those signs for real and start doing some urban interventions." Follow his