The Tesla Model S had only gone a few feet, rolling mostly straight from one empty spot in the parking garage to another. The driver wasn't actually behind the wheel, though. He sat in the passenger's seat, donning an EEG headset that allowed him to control the vehicle with his mind. Meet Teslapathic.

This feat is the brainchild of California-based technologists Casey Spencer, Lorenzo Caoile, Vivek Vinodh and Abenezer Mamo. Their team used Spencer's 2015 Tesla Model S 85D for the hack, and their project placed third at the Cal Hacks event for university students this month.

The team only had 36 hours to make Teslapathic happen for the hackathon. In their setup, an EEG headset translates the brain activity for "stop" or "go" into analog signals broadcast by an off-the-shelf RC radio and articulated actuators on the pedals and a motor on the steering wheel, according to the team's description.

A machine learning training program turned the brain activity into specific commands. For "go," Spencer thought about tapping his right foot, and for "stop," he thought about clenching his left hand. The analog signal for "go" caused a linear actuator affixed to the brake pedal to recede, and the actuator on the gas pedal to engage. For "stop," it was the opposite. 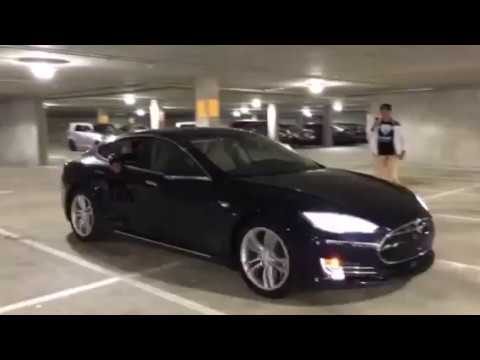 Steering was slightly clunkier, and not brain-controlled. They installed a windshield wiper motor fitted with a potentiometer on the steering wheel. A head-mounted gyro for the driver provided some steering so when the Spencer turned his head right or left, the steering wheel responded.

For safety, the code included an emergency brake in case of failure, the user had to hold a dead-man's switch in order to broadcast a signal, and a block wedged behind the accelerator prevented the Tesla from going too fast. And, at worst, the passenger could kick the actuators away from the pedals.

Granted, once it went, the Tesla wasn't quite between the lines and probably would have dinged the neighboring sedan if Spencer didn't think hard enough about stopping. But those few feet represent an incredible surge into the future.

A year ago, Spencer created a brain-controlled golf cart (video) dubbed the "Cranium Cart" for Cal Hacks. Potentially wrecking a golf cart isn't the same as risking a $85,000 Tesla, but Spencer clearly isn't afraid to put his car to the test. He is upfront about participating in Tesla's referral program, too, which probably helps.

In September 2015, he became the first person to break the 500-mile limit by going 550.3 miles on a single charge (video) going about 21 mph across two states with no stops. Earlier this year he pitted the Tesla against a 2015 BMW M4 (video).

"I especially love going the extra mile," Spencer wrote on his YouTube channel. "Mostly because it doesn't cost anything."