Don't expect to see any tail-thrashing or bloody water -- that's not what shark diving is about.

Each year, 100 million sharks are killed, many of them illegally. Misunderstandings perpetuated by hyped-up "mockumentaries" and movies such as Jaws or The Shallows, instill the kind of fear and apathy that justifies the deaths. Those attitudes are sending sharks into extinction, says Corliss.

But GoPro's VR video, Diving with Sharks, the Truth Below the Surface, which features Corliss and shark expert and conservationist Jim Abernethy diving with hammerheads, lemon sharks, and Caribbean reef sharks in the Bahamas could help change attitudes.

"Diving with sharks is perceived as stunt," Matthew Reyes, strategic content manager at GoPro told DNews. "But by no means. These sharks have personalities; they are not man-eaters. How do we offset that?"

The video, which is also available here, opens with a night dive, where sharks emerge suddenly from a pitch black sea into a globe of light. Over the exaggerated exhales of a person (you) breathing through a regulator, another diver's hollow voice says, "Eyes open, look to your left" and then, "Shark coming in from the right side." It feels claustrophobic. Dangerous. The music quickens and your heart begins to beat a little faster.

RELATED: Why Sharks Are in Double Jeopardy

And then its daybreak on the bow of boat moving out to sea. Corliss's voice narrates, "We fear what we don't understand."

Corliss, better known for his sky diving, BASE jumping, and wing suit exploits -- including a recent wing suit flight over the Great Wall of China -- has been diving with sharks for 24 years.

He was 16 years old the first time he did it and he went in expecting what many people expect.

"I had a preconceived idea that is was going to be a super-high-energy, terrifying thing," he said. But when he got into the water, it was the opposite. The animals were peaceful, calm, docile. Corliss felt a serenity he hadn't expected.

"The most striking thing for me was how scared they were," he said. "They don't want to get close to you. You cannot be scared of something that's so terrified of you."

More recently, while planning a trip with Jim Abernethy to film sharks, Corliss got the idea to contact his sponsor GoPro about creating a VR experience.

"We wanted to show people what it was really like to go on a dive with sharks," Corliss said.

GoPro's video channel on Facebook features several thrilling VR videos, from surfing to skiing to wing suit flying. But you'll also find ones where you can interact with rhinos and Sequoia trees.

Corliss says, "GoPro has a heart. What they have been doing for wildlife is beautiful."

To film the dive in 360-degree footage, GoPro put their Omni multi-camera setup inside a housing called the Abyss, made by Kolor, a partner company. The Abyss has large dome ports that not only allow for wide views but also create pockets of air in front of the lenses. These air pockets make it possible to transition seamlessly between underwater shots and above-water shots without creating distortions in the image.

The cameras are linked together so that the simultaneous videos are synched at the pixel level. That gives the film editor better control and produces a higher quality video. You can see more details about the camera and get a behind-the-scenes story below. 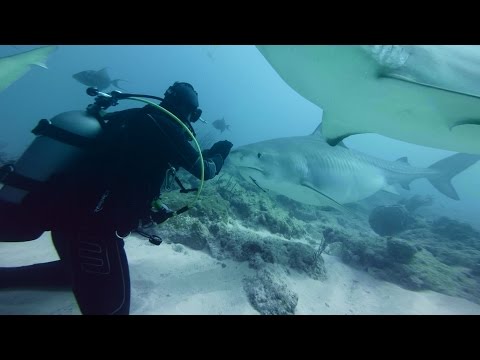 Before going into the water, Abernethy instructs the divers to give the sharks space. Don't grab them by the tail or try to ride them, he says.

"You have to respect them," Corliss told DNews. "They have teeth; they can be dangerous. But at the end of the day, they are not monsters."

Once immersed in the VR experience, the dreamlike tranquility of the underwater world becomes apparent. Sharks glide into and out of the frames without any threat, while watching divers kneel in the sand.

"They are not to be feared," said Reyes. "And we should try to take care of them."

This video is step in that direction.