A floating billboard platform is really a quadrotor drone enclosed in an inflatable ball. Continue reading →

The innovative inflatable drone known as the Skye is turning a lot of heads at the CeBIT 2016 tech conference in Germany this week.

Designed by engineers at the European startup Aerotain, the Skye can be outfitted with an internal projector to display moving images on the balloon's skin, turning it into a kind of futuristic, 360-degree flying billboard.

About three meters in diameter, the Skye is rigged with four internal motors that can be remotely controlled, much like a typical quadcopter. That allows an operator to maneuver and spin the balloon in a variety of ways. But because the fan propellers are enclosed, the Skye can descend into crowds and be safely bopped around like a giant space-age beach ball.

Finally, the Skye can be outfitted with standard camera drone video equipment. The remote motor system provides full omnidirectional control. Depending on weather conditions - and how much optional gear it's carrying - the Skye has a flight time of about two hours on a single charge.

This latest iteration of the Skye comes after several years of development by the Aerotain team, who originally came together while working on the Skye as a graduate project at ETH Zurich.

Fans of the classic sci-fi thriller "Blade Runner" can surely see where all this is headed. Those who remember the British TV show "The Prisoner" may be having flashbacks as well. The future, clearly, is now.

Here's an early demo video of the Skye system in action. 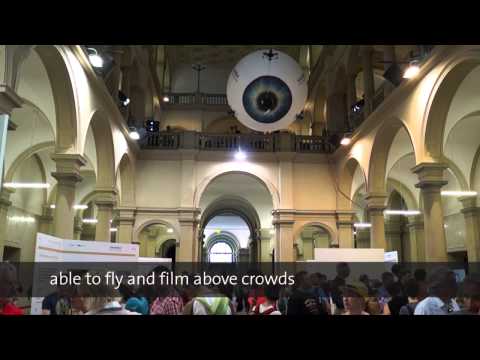 Robots and drones get a bad rap sometimes, but there's an entire industry out there designing bots and UAVs specifically designed to save human lives. Here we take a look at some of these machines, including Boston Dynamics' BigDog robot -- pictured above. Like a hydraulic St. Bernard, the robot can deliver emergency supplies to remote or hazardous areas over rough terrain.

Toshiba's custom-designed two-arm underwater robot was constructed for the express purpose of removing debris and fuel rods from the Fukushima Daiichi nuclear power plant, destroyed by an earthquake in March of 2011.

Drone Systems' Scout UAS is designed to be used by the first arriving units in emergency situations. It can be deployed in under two minutes to provide aerial view of disasters or wildfires.

The Korea Advanced Institute of Science and Technology (KAIST) has developed a hybrid aerial drone that can enter flaming skyscrapers and endure flames of more than 1,000 degrees Celsius. The bot can shift from flight mode to spider mode on its own, crawling up walls to navigate narrow spaces.

) is a volunteer network of drone owners that work with authorities in search-and-rescue scenarios. Coordinated drone searches are less expensive than piloted aircraft operations, and can cover larger areas. The group has more than 1,000 members in 42 countries.

This concept UAV from industrial designers Frog Design can be deployed in skiing areas for both avalanche prevention and rescue. The drone could carry explosives to trigger controlled avalanches, or use its thermal cameras to locate people trapped under snow.

Another concept UAV from Frog Design, the Firestorm uses an array of advanced sensors to move through burning buildings. Powerful LED lights and a short-wave bullhorn can be used to guide survivors to safety.

Developed by a German nonprofit, the Defikopter is designed to deliver defibrillator units to victims in remote locations. The drone can be summoned by smartphone app and uses GPS coordinates to drop the defibrillator by parachute.

Drones To Assist Search-And-Rescue In Maine

Another innovative design from Boston Dynamics, the SandFlea can jump up to 30 feet in the air to overcome obstacles during reconnaissance missions. Onboard stabilizers keep the bot level while it's in flight, and the bot is accurate enough to jump directly into second- or third-floor windows.