Get the full Mark Watney experience and immerse yourself in a 'virtual reality' Mars landscape courtesy of NASA's Mars rover Curiosity.

Late last year, NASA's Mars rover Curiosity arrived at the "Bagnold Dune Field" on the slopes of Mount Sharp, rolling up to the base of the dark sands of "Namib Dune." The mission has since been studying the area, scooping samples and surveying the surrounding sands. And, of course, taking some pretty spectacular imagery of these extraterrestrial sand dunes.

In January, mission scientists released a full 360 degree view of this fascinating region of the Martian surface, but this week you can really get the Mark Watney experience - NASA Jet Propulsion Laboratory (JPL) scientists have uploaded an immersive, 360 degree "virtual reality" experience to YouTube. Check it out:

(Hint: Push the resolution to the highest setting supported by your monitor/connection and go full screen, it's great.) 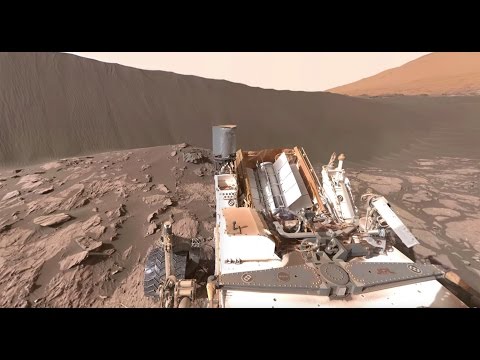 What you are seeing is the view from Curiosity's Mastcam as it snapped a series of hi-res photos, assembled as a mosaic. Namib Dune is the dark slope that makes up the majority of the scene and the peak of Mount Sharp can be seen towering in the distance.

PHOTOS: The Mysteries Behind the Dunes of Mars

Apart from making for a cool immersive experience, Curiosity's studies of the dune and the material it is made of is key to our understanding of wind-blown (aeolian) processes on the red planet. The Bagnold field is known to be "active" and from orbital observations, the dunes are known to roll across the Martian landscape at a pace of around 1 meter per year.

I took particular joy from panning the camera down to look at Curiosity's deck -- red dust can be seen collecting around the instrumentation and cables, making the rover (which landed on Mars in 2012) look as if it absolutely belongs on the dusty alien surface.

You can find out more about how this scene was constructed via the JPL website.

This image shows a screengrab of the 360 degree YouTube video, Curiosity's deck, Namib Dune and Mount Sharp in shot.

The realism of "The Martian" is getting the attention of NASA -- and not only because of what fictional NASA astronaut Mark Watney (Matt Damon) does on the surface. The agency has released several photographs showing real-life locations related to Watney's journey as he tries to get home to Earth. Also, the European Space Agency put out a map showing where Watney moved around on the surface (which we have put last in case you are worried about any spoilers.) Read on to see some of the places Watney had to think about when surviving on Mars.

PHOTOS: The Martian: Science vs. Fiction

Watney's journey begins in Acidalia Planitia, the landing site for his mission (Ares 3). Inside the crater you can see deposits that were blown there by the wind. Think about it -- as Watney and his crew moved around the crater, every place they went to, they were the first to put bootprints in that sand. The University of Arizona's HiRISE camera aboard the Mars Reconnaissance Orbiter helped gather data for this picture. "We can’t see the Ares 3 habitat because it arrives sometime in the future, so this is the 'before' image,"

NEWS: Space Experts Swoon for 'The Martian' Despite Inaccuracies

While we think of Mars as a place devoid of humans, we've sent several landing missions over the years. It turns out that Ares 3 is not so far away from the landing site of

and its rover, Sojourner -- the first rover to explore Mars in 1997. This image shows portions of the craft after it was deployed, such as the airbags and possibly parts of the heat shield. Since Pathfinder, NASA has sent three more rovers to the surface:

(2012). Opportunity and Curiosity are still working on the surface. The European Space Agency plans to send its first rover to Mars as part of the

As the name "Ares 3" implies, the Ares program is just one of a series of missions to Mars. Ares 4 is the next one, targeting a famous crater on the Martian surface: Schiaparelli Crater. Nearly 300 miles (500 kilometers) across, it's hard to get the entire thing into one high-resolution image, so this is just a portion of it taken with HiRISE. According to NASA, the agency has

like this for two reasons: the dust gets very warm during the day and cold at night (hard on equipment) and it's hard to know if there's anything interesting geologically in the bedrock underneath.

ANALYSIS: The Martian Winds WON'T Blow You Away

Here's a challenge about moving around on Mars: it's really hard to judge distance, because there are no familiar human markings to help us find our way around. Astronauts faced this challenge on the moon, and as Watney uses his rover on the surface, he has to be similarly careful not to go in the wrong direction or overstretch his rover's battery. Mawrth Crater is one of the landmarks Watney plots. "The crater rim is not very distinct, and from the Martian surface it would be quite difficult to tell that you are even on the rim of a crater,"

VIDEO: How The Martian Strives to Get the Science Right

The Opportunity rover (which landed in 2004) is somewhat close to where Watney is moving around. It's possible that Watney draws inspiration from the plucky machine, which is still working well on Mars long past its original 90-Martian-day expiry date. Among Opportunity's major milestones: driving

more than a marathon's worth of distance on Mars,

finding extensive evidence of water around its landing site and beyond, and

exploring the rim of a large crater

While we initially could imagine craters as simple excavations of the surface, the Martian weather makes them far more complex than that. This is a

, somewhat near where Watney was moving on the surface. These thick deposits would be made either by water (in the ancient past, when Mars was wetter) or wind, based on what we know of similar processes on Earth. You don't see a lot of craters here because the deposits are so thin that the wind can easily erase any craters in the surface.

Here you can see Watney's journey across the surface of Mars, as mapped by the European Space Agency (and German Space Agency, DLR) based on imagery from the Mars Express spacecraft. The colors represent different heights of features on the Martian surface, with blue being lowest and red being highest. You can see how Watney had to carefully make his way between craters to reach his destination, the Ares 4 landing site.